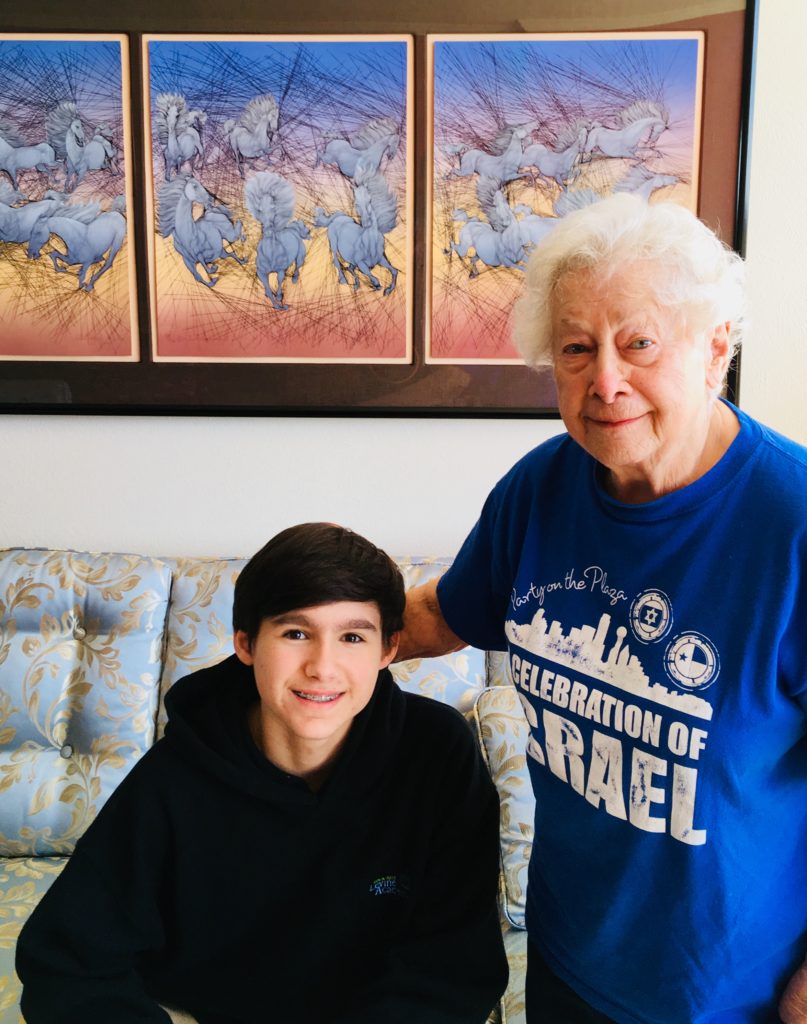 By Deb Silverthorn
One person’s “stuff” being another’s treasure is the theme of 13-year-old Jonathan Pershes’ Treasures Mitzvah Sale from 8 a.m. to 2 p.m. Sunday, April 8, at 16007 Ranchita Drive in Dallas. Proceeds will benefit the Dallas Holocaust Museum/Center for Education and Tolerance and the Hebrew Immigrant Aid Society (HIAS).
“Remembering those who survived the Holocaust and those who didn’t is important to me,” Jonathan said. “People donating their treasures, that aren’t trash but that they don’t need anymore, will help support programs that honor our history and make a difference in the present.”
Jonathan is the son of Clifford and Michael Pershes, a member of Congregation Anshai Torah and a seventh-grader at Levine Academy.
The sale of books, home goods and decor, and clothing (all sizes, in good condition) will accompany the sale of homemade lemonade and challah — a welcome taste for many, given Passover will have just ended.
“Reading and learning about the Holocaust in school is one thing, but to spend time with a survivor and to get to know her makes it real and relatable,” said Jonathan, who has spent time with Dallas resident Magie Furst, a Dallas Holocaust Museum volunteer of 18 years. “Magie’s history is amazing, and I appreciate her helping me understand what it was like to be a child during that time.”
Born in Germany, Furst, her mother and brother, Dallas’ Bert Romberg, escaped to Great Britain via the Kindertransport after their father died and Kristallnacht occurred. HIAS helped place her in a boarding school, and she later worked for a dentist before the family came to the U.S. in 1945. In New York, she met and married Harry Furst, of blessed memory, with whom she built a family of children, Richard and Robin, and grandchildren, Augie and Manie.
“It’s important to talk about that part of my life, and I’m tickled pink that Jonathan respects our time together. I appreciate his wanting to share and preserve that,” Furst said. “I kept a diary every day of the war and was always aware of what was going on even though it could take weeks to hear news. Again now, we’re living with so much anti-Semitism and it’s shocking how many people have no idea. I have to talk. We have to talk.”
“We’re deeply moved Jonathan chose to include the Dallas Holocaust Museum in his bar mitzvah celebration,” said DHM President and CEO Mary Pat Higgins. “Young people like Jonathan are Upstanders who serve as examples for us all. His gift will help support the Museum’s mission to teach the history of the Holocaust and to advance human rights combating prejudice, hatred and indifference. We congratulate his whole family on this special occasion and wish him the very best in years to come.”
“I was so pleased to hear about Jonathan’s support. His choice of beneficiaries shows his awareness of the inextricable link between these amazing organizations,” said Frank Risch, chair-elect of the Dallas Holocaust Museum and a HIAS board member. “He’s indicated his understanding that if only America and the rest of the free world had more readily accepted Jewish refugees at the time, the horrors of the Holocaust could have been inflicted on far fewer.”
HIAS helps vulnerable refugees of all nationalities and religions build new lives and reunites them with their families.
Others coming first isn’t a singular bar mitzvah project to Jonathan; it’s the way he lives every day. He volunteers, alone or with family and friends, his “Mitzvah Bro Posse,’ with the Austin Street Center, Chabad’s Friendship Circle, the Dallas Food Bank, Jewish Family Service, Palm Spring’s Well of the Desert and others in the community.
“Jonathan, Yonatan, means gift from God. We thank God every day for this incredible present and that’s who he’s always been,” said his father, Michael. “We’re always proud of him, but still amazed at the transformation that is now happening from boy to young man.” Michael added that Jonathan’s middle name, Simon, honors a revered uncle who lived to 104.
Outside of school and volunteering, Jonathan’s rarely happier than when he is playing basketball for the Chai Force basketball league or the Levine Stallions, bicycling, playing video games or cooking with his parents.
“Jonathan never ceases to amaze us with his ability to connect and emphasize with others, adapt to challenging situations and his endless love for animals, basketball and the way he and his friends make serving others ‘their thing,” said his father, Clifford. “It’s our hope that Jonathan will look back at his bar mitzvah with great success and accomplishment and that one day, God willing, he’ll share this experience with his children.”
Prepping to score high at his May 5 bar mitzvah, at which he’ll welcome friends and family including his grandparents Pat and Scott Jimeson, Alice and Mike Kearney, Bob and Ellie Pershes, Pat Defreitas and aunts Shannon and Heather Defreitas and Mer Pershes, Jonathan is making mEMORies (for Parashat Emor) throughout the community, the one he’ll soon join as an adult in its eyes, an example to his peers, those whom he follows and those next in line.
To donate items to the Treasures Mitzvah sale, or to make a financial contribution for Jonathan to share on this occasion, email pershesfamily@gmail.com or call 917-531-6576 for drop-off or pickup arrangements.

Real hypnotherapy, without the swinging watch