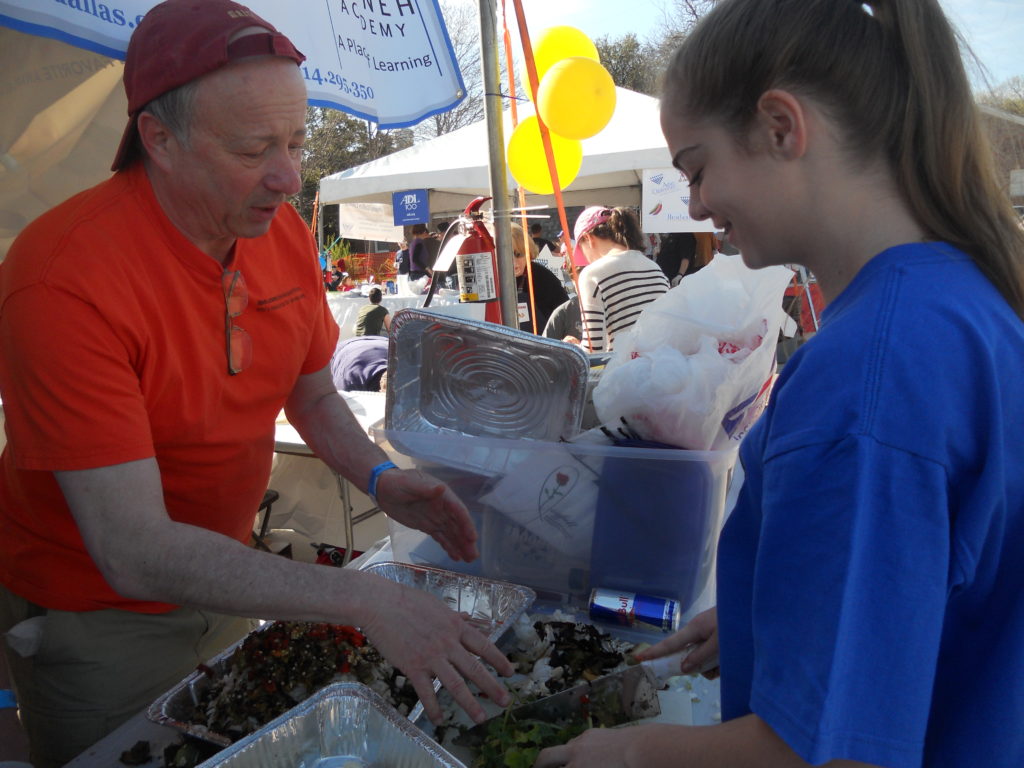 Some 43 teams from the Dallas Jewish community will stir the pots for the annual Dallas Kosher Chili Cook-off at 11 a.m. Sunday, March 18, at Congregation Tiferet Israel. The Cook-off is celebrating its 25th year.
The Cook-off, whose title sponsors are the Jewish Federation of Greater Dallas, Key-Whitman Eye Center and the Marsh & McLennan Agency, is recognized as the premier event in the area for bringing the North Texas Jewish community together.
“The Cook-off is not only the oldest continuous Kosher Chili Cook-off event in the world, but one of the largest,” said Tiferet Israel President Ed Jerome. “It has evolved into an integral rite of spring on the Dallas Jewish calendar.”
“We are so happy to welcome back the many teams who’ve been here year after year and also the newcomers — the prizes are up for grabs,” said Jay Abrams, who has co-chaired the event with his wife, Janet Bubis, since 2009. “It’s a lot of work, yes, but it’s so much fun. From Saturday night’s last-minute details until we open the gates, it’s lots of nerves — but when the public comes in, it’s the best day ever, every year.”
“A quarter of a century is an incredible milestone, a silver anniversary of high order because the foundation of the Mishkan was of silver brackets,” said Rabbi David Shawel, Dallas Kosher’s director of supervision. “It could definitely be argued the Cook-off is a significant part in the foundation of our Jewish community. I hope God blesses the event’s leaders, participants and all who attend, and always I pray the unity we feel that day should last all the days following.”
Just 12 teams competed at the initial event, founded by Jack Baum, Mark Kleinman and Dan Prescott. Attendance was 600. In recent years, the teams have tripled and the attendees have grown into the thousands.
The Aaron Family JCC, Akiba Academy, Congregation Shaare Tefilla, Congregation Shearith Israel, Dallas Kosher, and Jewish Family Service teams have competed every year since the contest began, returning to round out year 25.
“I’ve attended or helped out for most years since the cook-off’s inception,” said Henry Litoff, who, with Alistair and Lauren Lyon, won 2017’s top prize after placing second on three occasions. “I enjoy competing because it represents the most important thing about our community, and that is the ability to come together to enjoy an event together as whole.”
Litoff, competing unaffiliated with any group, previously helped represent Moishe House, which, led by his brother Austin, won in 2013 and 2016 and earned the People’s Choice prize twice. “This year my brother and I aren’t going head-to-head as I’m competing in the vegetarian category, so hopefully we can both win first place. Of course, I can’t share our recipes, but having grown up together we share sensibilities and traditions around food and its preparation.”
Tiferet Israel has shared proceeds of the event with nonprofit organizations from throughout the community for many years. While in previous years there have been two or three beneficiaries, it was determined this year that JFS’ Harvey Relief efforts was the place to share.
“Our partnership with the Kosher Chili Cook-off is so special because it demonstrates how our community continues to rise to the occasion and support us in meaningful ways. Even now we’re still providing support for those individuals staying long term in Dallas to help them get back on their feet,” said JFS CEO Steve Banta. “The outpouring of support for JFS’ Harvey Relief efforts was beyond imaginable, and none of this would be possible without the power of the Dallas community.”
This year’s judges will share their flair for the kitchen, their love for chili and their heart for anything Texas community as they begin testing fare from each of the teams. The judges — David Feder, Craig Ford, Dotty Griffith, Danny Hall, Michael Mrugala, Kim and Tom Schroeder, and Kara Sewell — are executive chefs at local restaurants, hospitals and universities, journalists and cookbook authors.
Awards will be presented at about 3 p.m.
In addition to chili samplings, barbecue sandwiches, hamburgers, hot dogs, falafel, corn, popcorn, cotton candy and Dippin’ Dots will be sold. There will be raffles and activities for children, including Home Depot-directed wood craft projects. Community organizations and vendors will have booths, and the Mazik Brothers and the R&R Band will play throughout.
Admission is $12 for adults, $6 for children ages 4 to 10 (including a free hot dog), with children 3 and younger admitted free. Parking with a free shuttle to and from the event will be at the JCC. For more information, call 214-691-3611 or visit kosherchilicookoff.us.