By Sean Shapiro
Special to the TJP

White supremacists and extremists aren’t new.
They’ve been around for years, but within the past 18 months the group, which has tried to rebrand itself as “alt-right,” has seeped further into American consciousness and seemingly gained more traction — at least from a volume and confidence standpoint within the ranks.
Much of that has to do with the 2016 presidential election as many within the group took Donald Trump’s campaign slogan, “Make America Great Again,” as a synonym for “Make America White Again.” 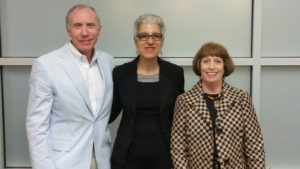 “Part of it had to do with the Trump campaign,” Marilyn Mayo said. “They were very supportive of the Trump campaign, even if the Trump campaign didn’t want their support. They were feeling like their feelings and ideologies were being promoted in the mainstream. The Muslim ban, anti-globalism, anti-immigration. And what I saw was that as time went on, up through November, there was this incredible anticipation that their ideas would get mainstreamed. There was this whole grouping of people who were excited and hoped they would have a champion in the White House.”
Mayo is a research fellow at the ADL’s Center on Extremism and studies the white supremacist and alt-right movements. Mayo was in Dallas last week to present to ADL’s GLI (Glass Leadership Institute) class, the Dallas Police Department and ADL’s Dallas regional board. She discussed some of her findings along with national and statewide trends in an interview with the Texas Jewish Post last week.
“In their minds they are thinking that finally people woke up to a conscious of being white and being working-class,” Mayo said. “That the group that largely elected Trump, they believe it’s a group and a voter base that woke up and stood up for what they believe.”
Trump’s actions during the campaign didn’t help their point of view. While he was a candidate, Trump was almost noncommittal on the alt-right for a while and didn’t immediately disavow some of the key leaders, including David Duke, while some of his tweets — including a picture of Hillary Clinton with a Jewish star — had content that originated from within white supremacists’ publications.
The group turned the “Pepe the Frog” meme, a harmless cartoon of a frog, into a hate symbol that is now registered in the ADL’s database of hate symbols.
“Twitter became the primary vehicle for them to harass people, because Twitter is easy because it’s anonymous,” Mayo said. “Much more than Facebook. You can get kicked off (Twitter) and set up another account within in the next hour, so it became the platform for people to use and harass others.”
Mayo said it also helped in the rebranding of white supremacy as alt-right.
“The alt-right is anonymous, but somehow they made it kind of cool for people to join,” Mayo said. “It also became a lot easier for someone to join the movement. As some others have said before, you don’t burn crosses anymore, now you just go harass someone on Twitter.”
Mayo pays close attention to the group. She reads articles and blog posts, searches through Twitter and sites like Reddit and 4chan, while she also listens to podcasts and Internet radio shows.
And it’s become an interesting time to study their beliefs and feelings. Since Trump’s inauguration some of the pro-Trump tweets have died down, as the alt-right has tried to figure out how to define itself after Trump has made recent steps to distance himself from them.
“Trump had a good speech the other day where he said many things that go against what the alt-right and white supremacists believe,” Mayo said. “It’s something you would have liked to see earlier, when he was a candidate, but it’s something in the right direction.”
While the message and Trump connections may be changing slightly, Mayo said the alt-right is still trying to attract young, educated individuals and they’ve been pushing that effort at college campuses with fliers that promote their vision.
“There is ignorance, but not for a lack of education,” Mayo said. “Some of the people involved are very educated. And they are trying to attract other educated individuals that are younger and can help articulate their message.”
Mayo said Texas is one of the states with the most instances of fliers being passed out and several Texas groups, including one called White Lives Matter, have a strong presence in the state.
“White identity is primary for them. Nonwhites and minorities, like Jews, stand against everything they believe,” Mayo said. “They feel that Jews are trying to destroy the white race in some way, by promoting third-world immigration to the United States and promoting diversity and multiculturalism. They blame the Jews for all of that.”
Mayo and her colleagues at the ADL are trying to combat the movement by observing and monitoring the alt-right and white supremacists. She said education and using those same mediums to promote positive speech are important.
“They’ve been around for a long time, but demographics started to change because they attracted more young people,” Mayo said. “That’s something we have to acknowledge and look at why that happened. It’s an anonymous group, or at least mostly anonymous, so we look at everything and make sure we are as informed as possible.”

Jews prepare for a High Holiday season of resilience