Barbara Rubin, who most of you know diligently coordinates the Daytimers program, supplied us with a wonderful update on the recent trip to the Chagall exhibit at the Dallas Museum of Art. You can find some great photos and a synopsis on Page 16 of this week’s issue.
Thanks, Barbara, for all your hard work and keeping everyone in the loop on the Daytimers’ activities. It looks like the day at the museum via the TRE and DART was quite an adventure.

The Martin Hochster Memorial Post 775 of the Jewish War Veterans has two important events lined up in the coming weeks.
Memorial Day will be observed at 10 a.m., Monday, May 27 at the Kornbleet Chapel at Ahavath Sholom Cemetery. Brigadier Gen. Brian Newby will speak. Post chaplain Rabbi Sidney Zimelman will give the D’var Torah and lead memorial prayers. The names of our veterans who have passed away will be read, as will those who have died in recent conflicts. All veterans and their families are encouraged to attend.
The post will have a breakfast installation and raffle at 9:30 a.m. Sunday, June 2 in the Great Hall of Beth-El Congregation, 4900 Briarhaven Road in Fort Worth. The annual Morton Herman Service to Veterans Award will be presented to former Secretary of the Army Pete Geren.
During his tenure, Geren helped correct many problems at Walter Reed Medical Center, stating that wounded soldiers deserved better treatment and facilities than they were getting. He also pushed an initiative for the army to pursue a more family friendly attitude toward those serving their country and their dependents.
The drawing at the event will include many restaurant gifts cards, tickets to athletic and entertainment events, a stay at a luxury condo, gift baskets, jewelry and more. Funds from the drawing will benefit the many veterans services provided by JWV 755. These include items donated to Liberty House, a reintegration facility for homeless veterans, The Fort Worth VA Clinic, packages to troops overseas, Sew Much Comfort (adaptive clothing for wounded vets and amputees), ROTC Scholarships, military honor services for deceased veterans and their families, flags at veterans gravesites and free copies of “They Were Soldiers in Peace and War” for bar and bat mitzvahs, among other things.
New officers will be Ron Sivernell, commander; Peter Levy, senior vice commander; Arnie Abrams, junior vice commander; and Will Cutler, judge advocate. Barry Schneider, district JWV commander, will be the installing officer.
For information on either event, contact past commander Julian Haber at julianhaber@aol.com or 817-346-1902; or commander Richard Morris at bearloverrich@yahoo.com or 817-581-9679.
Incidentally, this is the fourth year the veterans have given a service award but the first to be called the Morton Herman Service to Veterans Award. JWV Post 755 renamed the award in February to acknowledge the tremendous amount of pro-bono work Morty Herman has done for the JWV and veteran community.
Previous winners of the award were: Year 1, state Sen. Wendy Davis; Year 2, Judge Brent Carr; and Year 3, Stevie Hansen and Nikki Hatley of MHMR Visions, who were instrumental in getting together Liberty House and VETCO-Veterans Council of Tarrant County.

I’d like to consider myself a decent home-cook and can attribute some of my success to Holly Clegg’s “Trim & Terrific” series. Many of you know Holly, the daughter of Ruth and Jerry Berkowitz, was way ahead of the curve when it came to fast healthy cooking. 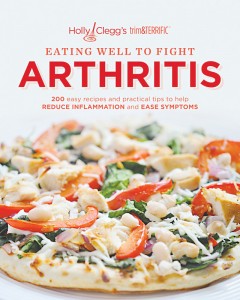 The newest installment in Holly’s series is “Eating Well To Fight Arthritis: 200 Easy Recipes and Practical Tips to Help Reduce Inflammation and Ease Symptoms.” The book is designed to aid the estimated 46 million adults in the United States living with a form of arthritis. With more than 100 types of arthritis and no known cure, physical therapy, medication and lifestyle changes, such as healthier eating and recipe preparation modification, are the best defenses to a condition that plagues many.
As soon as I received the book Holly sent me in the mail, I could tell it was a winner and immediately ordered a copy for a friend of mine with rheumatoid arthritis.
Holly’s user-friendly, illustrated cookbook features 200 delicious, everyday, time-friendly recipes, as well as the basic tools and tips needed to create a healthier kitchen. As the second most frequently reported chronic condition in the United States, arthritis can strike at any age. Clegg worked closely with the Arthritis Association of Louisiana to research and learn the correlation between food and arthritis. The family-friendly recipes throughout the book are made of ingredients that work to alleviate arthritic symptoms, such as joint inflammation, fatigue and nausea. The book’s chapters are organized by the symptoms they combat, including:

For easy reference, the nutritional and dietary exchange information is included for each recipe, and symbols highlighting Freezer-friendly, vegetarian, gluten-free and diabetic-friendly recipes are included throughout the book. Additional helpful features include “Terrific Tips” that provide quick recipe references and shortcuts, and “Nutrition Nuggets,” which give important information about the nutrient-rich ingredients in each recipe.
With more than one million cookbooks sold, Clegg has become an expert on easy, healthy recipes through her best-selling cookbooks, including more targeted, health-focused cookbooks “Diabetic Cooking” with the American Diabetes Association and “Eating Well Through Cancer.” Holly has appeared on “Fox & Friends,” “NBC Weekend Today,” QVC, “The 700 Club,” USA Today, WebMD and The Huffington Post. For information, visit www.hollyclegg.com or http://thehealthycookingblog.com.

The theme of this year’s convention is “L’eila: Raising Cantors Higher.” Its emphasis is to equip cantors with the skills needed by today’s synagogues. Sessions offered will include: chaplaincy, homiletics, song leading skills, spirituality, social media and technology.
That’s a 30 for this week. I love to hear from our readers. Send your news to me at sharonw@texasjewishpost.com or 7920 Belt Line Road, Ste. 680 Dallas, TX 75254.