When I was growing up around the TJP layout room, there was a certain energy that permeated the air as we finalized each issue and looked for errors. Often you would hear an “ay yai yai” when mom or dad saw a mistake and you’d be on the receiving end of a “good catch” when you caught one yourself.
There is a certain amount of stress that goes with putting a newspaper to bed week in and week out. To be honest with you, I sweat every Thursday when the paper comes out, which is usually when I realize or learn of mistakes not caught. When folks are kind enough to take the time to point these out to us (which we truly appreciate, otherwise, we won’t know what part of the system we need to fix) we print the correction as quickly as possible.
Last week I received two corrections. In last week’s Around the Town column, I incorrectly reported that the JWV will hold its Memorial Day Service on Monday, May 27. In fact, this will be held on Sunday, May 26. Time and place are as reported, 10 a.m. at the Kornbleet Chapel at Ahavath Sholom Cemetery. Brigadier Gen. Brian Newby will speak. Post chaplain Rabbi Sidney Zimelman will give the D’var Torah and lead memorial prayers
On a more furry note, last week I heard from “Rayburn,” an apparently multi-talented dog who can type. My apologies to Rayburn, a committed therapy canine, who got his fur a bit on edge when we neglected to mention his name and identified him merely as “dog.” I think it’s time to bring back TJPets, one of our most well received special sections ever. As mom always said, “names make news.”

From Gettysburg to Baghdad

Thanks to Hollace Weiner who shared the following about the veterans exhibit which launches this week. 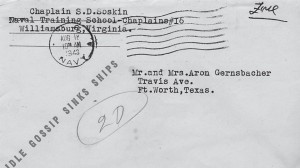 “This Memorial Day and throughout the summer, check out the veterans exhibit in Beth-El’s Hall of Remembrance. It focuses on local Jewish soldiers who served in uniform from the Civil War to the War on Terror.
“The exhibit begins with the War Between the States and information about Jacob Samuels, an early member of Ahavath Sholom, who has a Confederate battle flag carved on his tombstone at Hebrew Rest Cemetery. Representing the Union is Simon Gabert, a charter member of Beth-El Congregation. Gabert and Samuels, both cavalrymen, were the first two Jews to settle in Fort Worth.
“The World War I display includes photos of soldiers Byron Gernsbacher and Edwin Schwarz, the city’s first pediatrician. Headlines from the Star-Telegram and Fort Worth Press relate how the city’s Jews celebrated in 1917 when the British captured Jerusalem. A printed program from a luncheon honoring Gen. John J. Pershing notes that the Temple choir provided the musical entertainment.
“The World War II exhibit case is devoted to Pvt. Harold Gilbert, who was among 763 soldiers who perished when the Germans torpedoed a troop-transport ship crossing the English Channel on Christmas Eve.
“For decades, details about the 1944 attack and even the name of the ship remained classified until books and TV shows unraveled the missteps, mistakes, and the truth behind one of the more tragic blunders of WWII. On display are several out-of-print books about the incident, including ‘A Night Before Christmas: Sinking of the Troopship SSLeopoldville.’ Pvt. Gilbert’s Purple Heart is among the medals in the display case, which is lined with the 48-star American flag that draped his coffin.
“The Vietnam War display showcases memorabilia from career Air Force pilot Ken Sherwin and Army quartermaster Morty Herman. Sherwin loaned the Beth-El Archives a visor, a sash and his Distinguished Flying Cross certificate. Among Herman’s mementos are a full-page, color map of the war zone, a souvenir South Vietnam flag and a shadow box with patches, military dog tags, medals, ribbons and photos.
“From the War on Terror, there are photos of Army Maj. J. Scott Baum and the text of his thank-you note to the congregation for items sent to his unit. Navy Lt. Brad Lewis is pictured on board the USS Winston Churchill, where he was chief engineering officer. Spec. Jon Haber, of the Texas National Guard, was photographed seated in Saddam Hussein’s Iraqi palace. Haber’s picture was published in the Jewish War Veterans calendar of July 2010, which is in the exhibit.
“The veterans display, organized by Beth-El Archives staff, will remain on exhibit until late August.”

More on this next week, but I want to alert you to an upcoming film festival sponsored by Ahavath Sholom beginning Sunday, June 9 and running through Aug. 18. The films are “Chariots of Fire,” “Jews and Baseball: An American Love Story,” “Footnote,” “Arranged,” “Victim No. 17,” “The Magician of Lublin” and “Follow Me.”
Also next week, we’ll feature Marvin Blum’s recent Q&A with Warren Buffet.