I have been so swamped here in TJPland that I’ve yet to make it to a summer movie. I’m thrilled to report however, that  the Congregation Ahavath Sholom Summer Film Festival is off to a great start.The second film will screen at 6:30 p.m. on Sunday, June 23 at the shul, 4050 S. Hulen. The film will be “Jews And Baseball: An American Love Story,” a documentary that celebrates the contributions of Jewish major leaguers and the special meaning that baseball has had in the lives of American Jews.
The film is sponsored by Ahavath Sholom’s Men’s Club and the Fort Worth Chapter of B’nai B’rith. Murray Cohen, Ahavath Sholom president and an avid baseball fan, will lead the discussion that follows Wear your favorite baseball gear while you enjoy free hotdogs, popcorn and cold drinks. Debby Rice tells me that she wouldn’t be surprised if there are a couple guests that you might want to meet.

“Daytimers” loved the Barbra Streisand film, “Guilt Trip,” probably because so many identified with the “Jewish mother” in the role.

The program included all the popcorn and ice cream you could eat plus the film for only $5. And the group had a wonderful time tasting various flavors.
Next event for the “Daytimers” will be the appearance of “Kids Who Care” in a lavish program titled “Freedom Bound,”  Wednesday, July 17. The group will be bringing the Israeli teens who will be participating in the summer program.  Lunch will be catered by Sprouts.
For information and reservations, call with your credit card to Barbara Rubin, 817-927-2736, Larry Steckler, 520-990-3155, or Hugh Lamensdorf, 817-738-1428, or reserve for yourself at www.bethelfw.org/donations. The Sylvia Wolens “Daytimers” is a program of Beth-El Congregation with financial support from the Jewish Federation.

Put this on your calendar

The Keeping Kids Safe Project by S.I.P. Kids, a national child safety organization who tours the country providing free FBI quality digital fingerprints for children, is coming to Fort Worth to host a free child safety fair. The event will run from 3 p.m. – 7 p.m. on Friday, July 12 and 10 a.m. to 4 p.m. on Saturday, July 13 at Bruce Lowrie Chevrolet, 711 SW Loop 820. 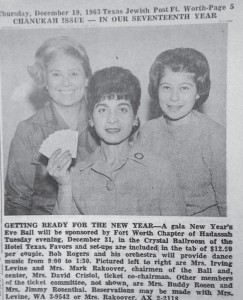 Blast from the past

I often peruse old issues of the TJP for one reason or another. It’s easy to get lost in the volumes, and time goes by quickly. Recently I came across the photo shown to the right of the late Bea Levine, along with Rachel Cristol and Nancy Rakoover from almost 50 years ago. Good times.
We love to hear from our readers. Send your news to me at sharonw@texasjewishpost.com or at the TJP, 7920 Belt Line Road #680, Dallas, TX 75254 or call me at 817-927-2831.