The Fort Worth Jewish community has taken unprecedented step. It has announced its Person of the Year awardee before the annual dinner.
Always a closely guarded secret, the selection committee elected to announce the winner so no one would miss out on honoring the beloved recipient, Harry Kahn. Rich Hollander extolled a few of Harry’s virtues, “Besides being president of Ahavath Sholom twice in his life Harry has also been president of B’nai B’rith for much of the past 10 years.  He is the reason we have one of the top 10 most active chapters in the U.S.
Gruff on the outside with a heart of gold, Harry Kahn has fed nearly all of us at least once and our senior community hundreds of times. Besides being active in Jewish community, Harry has also been the heart and soul of our Christmas Day work at Beautiful Feet.

Tickets for the 2016 Jewish Person of the Year Dinner which will be held on Oct. 30 at Beth-El Congregation  are $25. Tables of eight are $200. The evening will be catered by Riscky’s BBQ. There will be kosher dinners available for those that reserve in advance. For ticket information, contact Rich Hollander at rich.d.hollander@gmail.com 817-909-4354, Alex Nason at alexnason@charter.net or Marvin Beleck at marvinbeleck@aol.com. 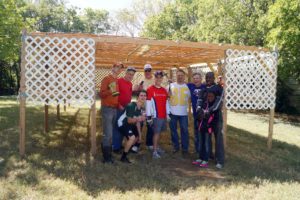 Around The Town: Support for soldiers, visiting Israel