Holocaust survivor and author Ben Lesser participated Sunday, April 23, in Tarrant County’s Yom HaShoah observance to share his story of survival and ensure the world never forgets the lessons of the Holocaust. The program was held at Beth Israel in Colleyville.
Ben also spoke to junior high school students on Monday, April 24, in Princeton, Texas, to share his family’s story and encourage the students to join his grassroots anti-hate, anti-bullying campaign, I-Shout-Out. 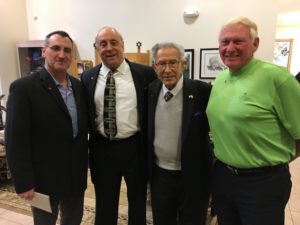 “The souls of our dear departed ones, all 6 million of them, are crying out to the world in a single word — zachor — which means to remember,” Ben said. “As we honor those lost on this National Holocaust Remembrance Day, we must also educate others so the lessons of the Holocaust will inspire today’s children to recognize, combat and ultimately extinguish the hatred that breeds genocide.”
Born in Krakow Poland in 1928 to a family of seven, Ben and his older sister, Lola, were the only family survivors of Hitler’s Nazi regime. During five years of living hell on earth, Ben was fortunate to survive several ghettos; four concentration camps, including the notorious Auschwitz, Buchenwald and Dachau; two death marches; and two death trains. He is the only living survivor of the notorious Dachau death train that brought him to the concentration camp three days before American liberation.
Lesser has made it his life’s mission to share his story, launching The Zachor Holocaust Remembrance Foundation, to ensure the world never forgets the lessons of the Holocaust. He founded I-Shout-Out, an interactive, grassroots, anti-hate campaign to put an end to intolerance by promoting supporters to speak up and out for those who cannot. The goal of the campaign is to garner 6 million shout-outs, one for each of the 6 million voices that were silenced by the Holocaust. By shouting out, participants in the campaign will sign the I-Shout-Out virtual wall, leaving a lasting legacy for generations to come to confront intolerance.
“The Holocaust and other tragedies all stem from the same base of intolerance. If people had exhibited tolerance and confronted Hitler’s hate, my family, along with the 6 million others, could have been saved, instead of destroyed,” Lesser said.
I-Shout-Out is powered by Zachor Holocaust Remembrance Foundation. The Zachor Holocaust Remembrance is recognized by the IRS as a 501(c)(3) charity. Its websites are www.i-shout-out.org and www.ZachorFoundation.org; Twitter: @I_Shout_Out; Facebook: IShoutOutCampaign.
At the event at Princeton High School, Ben urged every student to join him in his I-Shout-Out effort by signing onto the online campaign and speaking up for what they believe in. Shouting out sends a unified message that individuals are not alone and upholds the fundamental values of respect that human beings deserve.
“At his very root, Hitler was a bully who was allowed to spread his message of hate across Europe because of those who did not take a stand,” Lesser said. “I have come to understand that so much of what happens in life is a result of seemingly simple human choices. We can choose not to hate. We can choose not to use hateful speech. Together, we can create a more peaceful and tolerant world.”
Recent studies indicate nearly one out of every five school children between the ages of 12 and 18 experiences bullying, an aggressive, harassing behavior of another individual. As he speaks to school groups and community organizations across the country, Ben challenges students and adults to join the I-Shout-Out campaign to raise awareness of the bullying epidemic that affects these hundreds of thousands of children each day.
Lesser’s story of courage, determination and achievement is detailed in his memoir Living A Life That Matters: from Nazi Nightmare to American Dream and is used in classrooms across the country to educate school children on the lessons of the Holocaust. To learn more about Lesser’s story of survival, visit zachorfoundation.org. To learn more and participate in the I-Shout-Out challenge, visit i-shout-out.org.