Mazel tov to Daniel Bloom, son of Rabbi Andrew and Michal Bloom, who was honored in April with the Donald F. Summers Young Entrepreneur Award by the National Federation of Independent Businesses (NFIB). Bloom, who graduated last week from Paschal, is headed to Oklahoma State University. Read on for Emilia Fredlick’s write-up of Daniel featured on the NFIB website (www.nfib.com/article/fens-69090/)
“A few years ago, Daniel Bloom wanted to make his own game. So, he picked up a couple of books and taught himself to program. 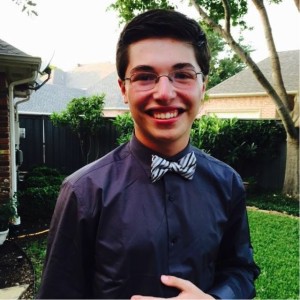 “It was that simple.
“The programming got him into technical programming, the technical programming got more and more complex, and that complex technical programming led to network security. Bloom ultimately taught himself Java, C#, C++, PHP, JavaScript and HTML5, and put his skills to the test in 2012, when he decided to launch Ironheart Security.
“‘I knew I loved working on security,’ says Bloom. ‘I knew it was what I wanted to do. So I figured — let’s just do it.’
“As an entrepreneur, Bloom is truly fearless. Driven by the desire to be his own boss and make his own decisions, Bloom made the right contacts, participated in competitions, and worked his way up the ladder.
“Three years, one rebranding and 15 contractor acquisitions later, Bloom is a high school senior at R.L. Paschal High School in Fort Worth, Texas. He’s headed to Oklahoma State University in the fall, whose cyber security program is formally recognized by the NSA, and plans to study network security with a specialty in information assurance.
“Bloom intends to continue running his company, now Bloom Cyber Defense, from OSU. He expects that they will continue to strive, especially with the help of a new product he hopes to get off the ground over the summer.
“‘It’s a pretty revolutionary Web intrusion prevention system,’ says Bloom. ‘It’s a high-functionality intervention system that I think has the potential capability of stopping attacks you’ve never seen before.’
“Bloom hopes this system will take care of his company for the next few years, so he can concentrate on getting his degree. And that degree is where NFIB comes in: in April, Bloom was awarded NFIB’s Donald F. Summers Young Entrepreneur Award.
“‘College is so expensive, and having a degree is such a huge step up in the world,’ says Bloom. ‘You don’t necessarily need one to go into network security, but to have that token, that certification, is amazing. Being able to pay for that without worrying is such a big thing.’”

The Jewish Education Agency (JEA) of Fort Worth has appointed  Esther Wolf to the position of Director of Lil Goldman Early Learning Center.
Esther is well-known in the field of Jewish education in the Metroplex. She comes to Lil Goldman after 30 years of combined experience working at Levine Academy, Congregations Shearith Israel and Beth Torah.
Esther graduated from Bar Ilan University in Ramat Gan, Israel with a Bachelor’s in Education and a minor in psychology and Jewish studies. She received a Master’s in Education specializing in early childhood from North Texas State University (now UNT). Esther is married to Harold and has two grown sons.
Lil Goldman Early Learning Center, a preschool in Fort Worth for 62 years, is devoted to fostering academic excellence, love of learning, the transmission of Jewish values and the affirmation of each individual’s worth through play.
Esther will bring her own vision of integrating Hebrew language, Jewish traditions and values to an academically sound but developmentally appropriate curriculum at the school. Lil Goldman Early Learning Center accepts children as young as six weeks old through age five.  JEA is also responsible for Camp Shalom the Jewish day camp for grades K-8.
For more information about the school or summer programs,  contact Esther Wolf at 817-737-9898.

We would love to hear from our readers. Send your graduates and other news to me at sharonw@texasjewishpost.com.

Around the Town: McCoy, Boys Choir