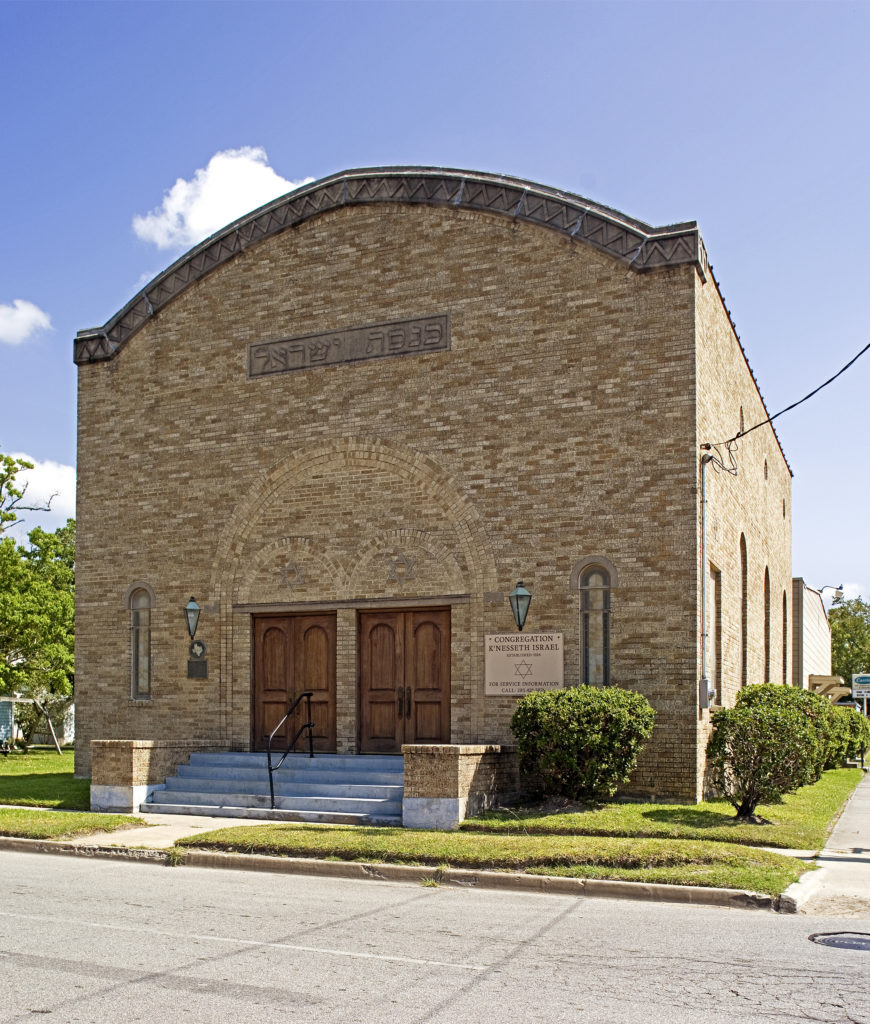 The destruction that Hurricane Harvey wreaked on Jewish institutions extended beyond Houston to nearby Baytown, where wind-driven, water-soaked K’Nesseth Israel synagogue is a landmark that is now uninhabitable. Restoring the historic shul and its community center, which date to 1930, will cost an estimated $114,000. But, unlike in Houston, where TV cameras continue to focus on the damage, there have been few headlines about Baytown to stir sympathy or support.
“We want the Eternal Light to continue to shine for future generations,” wrote congregants Joan Teter Linares, Shana Bauman and Denise Havenar, in a fundraising appeal. The trio are battling the shul’s insurance company to cover the damages.
“Our synagogue has always been well-loved since 1930, attended by third and fourth generations,” they wrote.
Among the charter members of K’Nesseth Israel were the grandparents of Rabbi Jimmy Kessler, founding president of the Texas Jewish Historical Society, and two ancestors of Samuel D. Gruber, president of the International Survey of Jewish Monuments. “The building represents what a group of ‘poor’ Eastern European Jews could build,” said Rabbi Kessler. “In older, established Texas towns, like Corsicana and Brenham, the Jewish community had ‘grander’ synagogues.” Contractors will need to be hired for mold remediation, new Sheetrock and grouting.
It was a decade ago that Hurricane Ike hit the small-town shul, damaging two-thirds of its adjacent community center — a rectangular structure that was originally a school building. Repairs were made in 2008.
Although there never has been a large concentration of Jewish families in Baytown (population 76,000), K’Nesseth Israel is the city’s oldest house of worship still in use. What first attracted Jews to the area was the opening in 1915 of the Goose Creek oil field. A railroad spur followed. In 1917 Humble Oil, now Exxon, opened the Baytown refinery, which grew into one of the world’s largest petrochemical complexes. Jewish merchants, mainly immigrants with Eastern European roots, opened stores to meet the retail needs of refinery workers. The area, near the northern side of Galveston Bay, was composed of three communities, Goose Creek, Pelly and Baytown, and was referred to as the Tri-Cities.
By the 1920s, 12 local Jewish families were renting a building for Friday night and Saturday morning services. In 1928, they chartered K’Nesseth Israel. The next year the Tri-Cities Jewish community pledged $18,000 to buy land, hire an architect and construct the shul.
Initially, services were Orthodox. They quickly morphed into what the late Don Teter described as “Southern Orthodox.” By that, he meant that Sabbath evening services started exceptionally early, “so that some members might catch the second half of the Friday night football game.” On Saturday morning, services began “quite early, so the merchants could open their stores by 9 a.m.” Teter, a chemical engineer at General Tire & Rubber Co., wrote a 13,000-word history of K’Nesseth Israel, titled Oil Gevalt.
Teter’s colorful narrative recounts how, on the High Holy Days, Dave Aron (Rabbi Kessler’s grandfather) and Mose Sumner (Sam Gruber’s great-uncle) sold aliyahs from the pulpit. Each auctioneer chanted a singsong sales pitch that ended with a thump on the Bible, as aliyahs went to the highest bidders. In 1943, the congregation celebrated its financial stability by burning the mortgage.
In 1948, the Tri-Cities consolidated to form the city of Baytown. By then, K’Nesseth Israel’s membership had grown to 47 families (around 200 people). From 1930 to 1953, full-time rabbis led the congregation. There was a Hebrew school, but only for boys studying for bar mitzvah. As members moved or passed away, the congregation shrank in size, yet always remained solvent.
K’Nesseth Israel no longer auctions off aliyahs. To raise money for Harvey repairs, the congregation is applying for an emergency grant from the Texas Historical Commission; seeking funds from Jewish Federations in San Antonio and Houston; and initiating a capital campaign of current members, former members and their descendants. The congregation has allocated $17,000 from its savings toward restoration. The Texas Jewish Historical Society approved a $1,000 grant.
Until Hurricane Harvey, K’Nesseth Israel held services one Friday a month and on High Holy Days, Sukkot, Simchat Torah, Chanukah, Purim and Shavuot. Hadassah meetings were held in the community center.
Congregants are determined to restore their landmark and to draw strength and spirituality from its deep roots. Later this year, K’Nesseth Israel is planning to celebrate the congregation’s 90th anniversary.
The community can send tax-deductible donations to Congregation K’Nesseth Israel, P.O. Box 702, Baytown, TX 77522-0702.
Hollace Weiner is an author, historian and former reporter with the Fort Worth Star-Telegram.