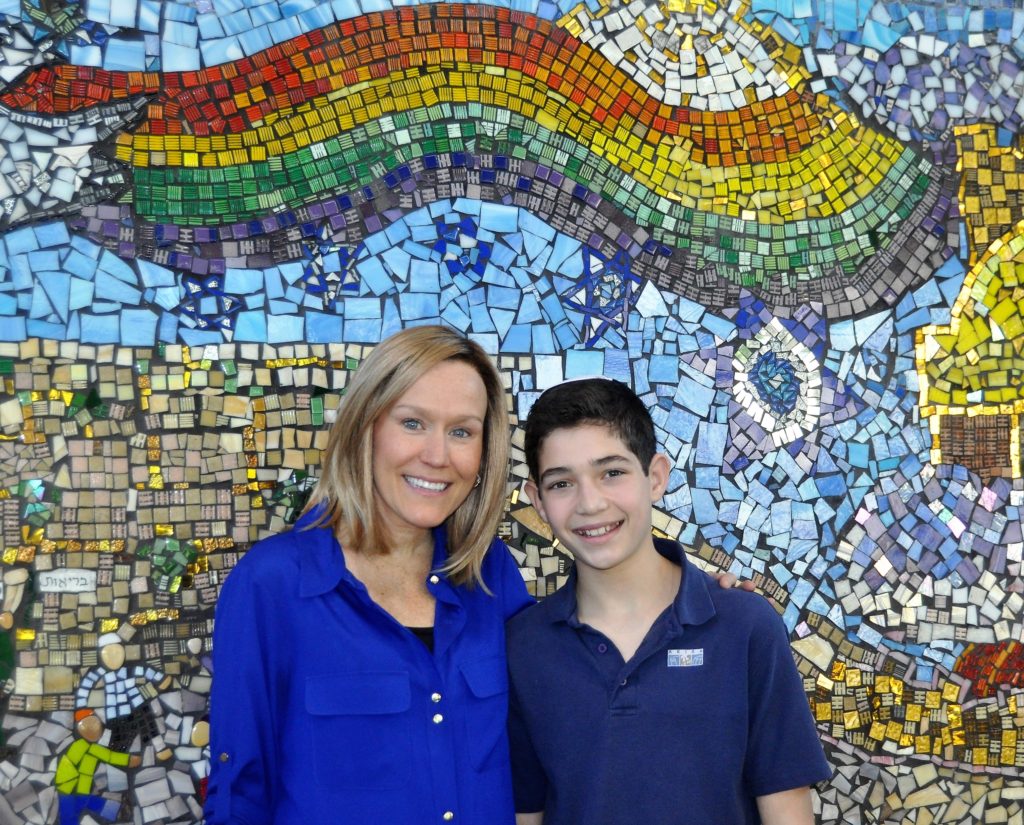 It’s almost impossible to describe what the meeting between core souls is like.
Those souls belong to a 13-year-old Jewish boy and a grown Christian woman who were strangers a month ago. On Thursday morning, March 23, the duo shared a moment at Akiba Academy as seventh-grader Ari Blumberg brought the spirit of a bar mitzvah project to life, and Kim Hunter, one of the recipients of his mitzvah, came to say “thank you.”
As the two first came together, with a brief hug, the assembly of students and faculty became anything but ordinary. Hunter spoke about her medical experience and how Blumberg’s project caught her at the right moment, in a manner he never could have planned.

“I just had an MRI and I didn’t know if maybe the cancer had spread, and I was scared. I walked in for my treatment and went to my chair, and there was this beautiful bag. At first I figured it belonged to someone else but there were bags on all the chairs,” said Hunter, whose husband Matt, children Holt, Allie and Hodge, sister Stacy Sparagna and niece Skotlynn joined her at Akiba. “The first words on the card jumped at me: ‘You are not alone.’ I can’t explain how immediately it went from a terrible day to an incredible one.”
Hunter, first diagnosed in December 2012, finished the round of treatment and couldn’t stop thinking about the gift during her return home to San Angelo. Her monthly treatments require a five-hour trip, with additional treatments sometimes in Dallas, and others closer to home in Abilene. 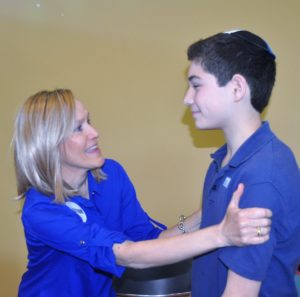 “I kept thinking ‘I want to thank this kid.’ I got home, snapped a photo, made my Facebook post public and went to sleep. I woke up to messages from Israel and around the United States and a friend of mine made the connection in less than 24 hours,” she said, never expecting almost 2,700 shares and over 5,300 likes, “loves” and more.
“I’ve had a lot of people praying for me in the last four years and to know now that people in Israel are praying for me? I knew there was something more to it — that a 13-year-old boy in Dallas took the time to care about me is something I couldn’t ever have imagined. When you are selecting mitzvahs, pray about it and see what’s in your heart because you never know who you might impact and the ripple effect.”
Hunter had never heard of the phrase “mitzvah project,” let alone experienced the benefit. Blumberg, whose grandfather Mike Degani is undergoing treatments at the same Texas Oncology-Presbyterian Cancer Center Dallas, was, in the spirit of his March 4 bar mitzvah, inspired by his grandfather to create a mitzvah project to help other patients.
“I saw how hard it was for my Saba and Safta (Hebrew for grandma and grandpa). He had brought home a smaller bag someone had left for him,” said Blumberg, the son of Sharon and Marc and brother of Ayla and Sam. “I wanted something bigger and fuller and I really just wanted to make it easier for patients and for them to know I was thinking about them. I’m glad Mrs. Hunter appreciated it, and it’s nice that people are learning about doing mitzvah projects, but it’s really just what I do, what we are supposed to do.”
Akiba faculty member Sarah Rosen spoke the words of many in the room, telling Hunter that it was she who inspired those present, that she wasn’t just receiving the goodness and education of what had transpired, but that she was teaching as well. “These children,” she said, “as they move forward in their mitzvah projects for b’nai mitzvah, and beyond as they perform mitzvot all of their lives, will have in mind the meaning and respect that is felt and appreciated, and I’m sure your example of appreciation will forever be remembered.”
Akiba’s principal, Rabbi Avi Spodek, presented Hunter with a tzedakah box like those gifted to students on the occasion of their bar or bat mitzvah. He explained the word tzedakah comes from the word tzedek meaning righteousness or justice and that fulfilling commandments is justice, the right thing to do. 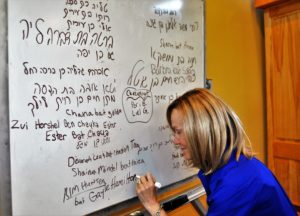 One of Blumberg’s classmates, Noa Terenyo, asked Hunter for her mother’s name, explaining that the students pray daily for those who are ill. “We want to keep you in our prayers and hope you’ll be better soon,” she said. To that, with tears welling, Hunter added her name and that of Gayle Hamilton to the whiteboard.
“I’ve always been taught to stand with the Jewish people and I know that I was put here to be a voice. I promise to keep learning, talking, and teaching others about how amazing the Jewish people are,” Hunter said. “I know God put me where He did.”
There were tears, they were joyful, and in the middle of the Beit Knesset, there was Blumberg’s mom Sharon at Hunter’s side. A month ago, the two women were unknown to one another; now there is mutual support, now they are friends, really a new world of family.
“We struggled with what Ari was going to do for a mitzvah project, wanting something that was meaningful and would deeply speak to him,” Sharon said. “Once my father was diagnosed it became emotional and there was a reason for what to do. We became inspired and Ari ran with it.”
“Kim’s presentation inspired all who listened to her message of faith and understanding. Through the story of her medical treatments and living with metastatic cancer, she conveyed her unwavering belief that everything happens for a reason and all is in God’s hands,” said Akiba Head of School Tammie Rapps. “When we teach how our actions matter, and about our Jewish responsibility to be a light unto the nations, it’s sometimes difficult to imagine what those lessons look like. After our meeting, those lessons looked like a blonde 41-year-old mom who has assumed the mantle of spreading goodness and kindness because she’s been on the receiving end of thoughtfulness and compassion.”
Touring the Schultz Rosenberg campus, Hunter was in awe of all the meaning put into the construction and creation by “spiritual architect,” artist David Moss and others involved in the purposeful design. “This is a special place and I love that from the youngest of the babies, the influence of good, and beauty and kindness, is here,” she said. “I don’t know if I’ll ever have the opportunity to go to Israel but walking down the corridor, someone explained to me that we were on target with the longitude and latitude to keep walking straight into Jerusalem. I believe in the power of prayer and in the power of healing and I thank you.” 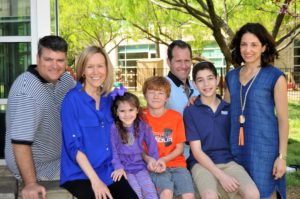 Hunter spoke to the importance of allowing others to help when facing a challenge. She had always been on the giving end, helping those in need. When she became ill, she had to learn to receive, to let others in.
Hunter believes wholeheartedly that this experience is not just about an incredible mitzvah project, but the chance for her to take it one step further, and that she vows to educate Christians about the Jewish community. “I absolutely will spread the amazing things you do and how we must stand by you. I want to stay in touch with you and learn more,” she said, after her talk hugging students and faculty members, many of whom offered babysitting and playgroups for her children whenever the family is in town. “I’m really overwhelmed and know that we will forever be entwined. This can’t be explained but I know it is God speaking to me and letting me know I’m not alone on this journey.”