The word on new Chanukah books for kids

BOSTON (JTA) — Judah Maccabee, meet the Golem of Prague. And Rebecca Rubin, Engineer Ari and Nathan and Jacob, two brothers who are part of a modern American Jewish family.
They are among the characters who take center stage in this year’s crop of new children’s books for Chanukah, the eight-day Festival of Lights that begins at sundown Dec. 20. The lively mix includes the recent release of an e-book version of a popular chapter book and a dazzling work of design by a renowned paper artist.
“Hanukkah, Oh Hanukkah!”
Illustrated by Olga and Eleksey Ivanov
Marshall Cavendish ($12.99); ages 1-4
A brightly illustrated book version of the popular song features double-page paintings of a family — and their smiling pet dog — celebrating each of the eight nights of Chanukah. Sing along as they light the menorah, dance the hora, eat latkes and play dreidel. An end note explains the origins of the Hebrew and Yiddish versions of the song, a mainstay of the holiday. Music and lyrics are provided. (A PJ Library selection)
“Engineer Ari and the Hanukkah Mishap”
Deborah Bodin Cohen, illustrated by Shahar Kober
Kar-Ben ($7.95); ages 4-8
Board a Chanukah train ride set in Israel, the latest addition to the award-winning series of “Engineer Ari” books that will especially delight train-loving kids. A stubborn camel provides the obstacle as Engineer Ari heads home with a trainload of Chanukah treats and toys. A Bedouin farmer named Kalil comes to the rescue, and together they celebrate the first night of Chanukah. Lively cartoon-like illustrations animate the fun and hopeful story. An author’s note explains the building of the first railway line between Jaffa and Jerusalem.
“Nathan Blows Out the Hanukkah Candles”
Tami Lehman-Wilzig with Nicole Katzman; illustrated by Jeremy Tugeau
Kar-Ben ($7.95); ages 4-8 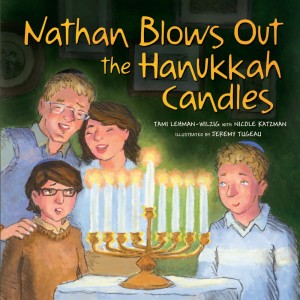 “Is it Hanukkah? Is it Hanukkah?” Jacob’s big brother Nathan repeats the question, and many others, again and again, annoying Jacob. Jacob tries to understand that his brother’s autism causes him to think and act differently, but sometimes Jacob loses his patience. Jacob is embarrassed in front of new neighbors when Nathan blows out the Chanukah candles as if it were a birthday celebration, but he defends Nathan when a new friend makes fun of his brother. The family’s creative response brings everyone together in a fun-filled Chanukah celebration. The story tackles a serious issue without being heavy-handed. (A PJ Library selection)
“Chanukah Lights”
Michael J. Rosen, Robert Sabuda
Candlewick Press ($34.99); ages 5 and up
This gift book, a stunning collaboration between award-winning writer and poet Michael J. Rosen and master pop-up artist Robert Sabuda, is one that kids might have to pry away from their parents — or they can enjoy together. Rosen in simple language traces the history of celebrating Chanukah and its aspiration for freedom from ancient times to today, from the ancient Temple to the desert, across oceans, to shtetls and the cities of immigrant families, to an olive grove on a kibbutz in Israel. Sabuda’s mesmerizing paper creations emerge miraculously from the folded pages. The artwork is outstanding in both its detail and the simplicity of the images it evokes.
“The Story of Hanukkah”
David A. Adler, illustrated by Jill Weber
Holiday House ($14.95); ages 4-8
Who was that guy Judah Maccabee and what does he have to do with Chanukah? Parents and educators seeking an informative and engaging book about the historic origins of the holiday will be attracted to David Adler’s signature straightforward style. Adler, the award-winning and popular author of more than 200 books for children, including “The Kids’ Catalog of Hanukkah,” is skillful at enlightening readers unfamiliar with the two-millennia-old story of the great military victory of the Maccabees over religious persecution by their Greek rulers and the miracle of the oil. Jill Weber’s illustrations evoke ancient times with the golden glow of the Temple and dramatic battle scenes of mighty Greek warriors on horses and elephants. The story ends with a modern family celebrating Chanukah. Back pages include Weber’s recipe for latkes and instructions for playing dreidel.
“The Golem’s Latkes”
Adapted by Eric A. Kimmel, illustrated by Aaron Jasinski
Marshall Cavendish ($17.99); ages 4-8 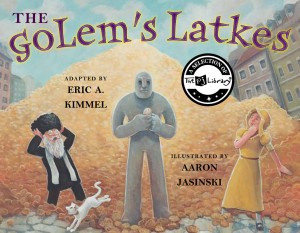 Master storyteller Eric Kimmel delivers a deliciously mischievous Chanukah spin on an old world legend of the Golem of Prague, a kabbalistic creature with magical powers to help the Jewish people. When Rabbi Judah of Prague leaves his new housemaid Basha with a long list of chores for the holiday celebration, he cautions her not to leave the hard-working golem alone in the house. The only way to get the golem to stop working is to tell him, “Golem, enough!” Kimmel writes. Kids will delight in the inevitable hilarity when Basha takes off to visit her friend and leaves the golem alone making latkes. The fried potato pancakes pile up higher and higher, out the windows, and take over the city streets. A festive ending gathers the whole city for a latkes-eating Chanukah celebration.
Jasinski’s memorable illustrations show the fantastical golem painted more like a Gumby-style robot than a frightening ghoul. Double-page spreads place readers in the action, from the cobblestone streets of Prague to the mountain-high towers of golden potato latkes.
In an e-mail, Kimmel, author of the popular “Hershel and the Hanukkah Goblins,” told JTA that he was inspired by earlier versions of the Golem story by children’s writer David Wisniewski, the classic story by renowned Yiddish writer I.B. Singer and the tale of “The Sorcerer’s Apprentice.”
“Ghost and goblin stories make for good storytelling,” Kimmel wrote. “That’s why they’ve been around for so long.” (A PJ Library selection)
“Candlelight for Rebecca”
Jacqueline Dembar Greene, illustrations by Robert Hunt
American Girl (6.95 paperback/ e-book available for Kindle and Nook readers)
Ages 8 and up
Set in 1914, Jacqueline Dembar Greene’s historical novel is the third in a series of six popular American Girl books featuring Rebecca Rubin, a Jewish girl who lives with her family on New York City’s Lower East side. Originally published in book form in 2009, it is newly available for electronic reading devices. Rebecca is uneasy when her class is assigned an art project to make a Christmas table decoration because her Jewish family doesn’t celebrate Christmas. Rebecca grapples with timeless, universal questions about acceptance and religious freedom that resonate with readers from all backgrounds.
In an e-mail, Dembar Greene told JTA that Jewish readers tell her that they enjoy having their traditions reflected in a series of books. One of the more memorable letters, she said, was from a third-grader at a Catholic school who said that she was amazed to discover so many similarities between the values and social concerns of the two religions.
“Playing Dreidel with Judah Maccabee”
A play by Edward Einhorn
Theater 61 Press ($14.95); ages 12 and up
Edward Einhorn is the artistic director of a New York-based theater company who served as the director of the Festival of Jewish Theater. Einhorn’s play is a fantasy that travels in time between a modern-day synagogue and ancient Israel. As the young Jonathan spins a dreidel, singing the familiar dreidel song, he is startled by the appearance of an old man dressed in armor. The conversation between Jonathan and Judah Maccabee starts out like a comedy routine, each questioning who the other is, but over eight days a warm relationship develops between the young adolescent and the ancient battle-weary warrior that sheds a contemporary light onto the long arc of Jewish history and ritual. Educators may find this a unique play for performing or reading aloud.

Bananagrams® Inc. (www.bananagrams.com), the creators of the hit word tile game Bananagrams®, is now available in Hebrew, translating the fast, fun and witty word play just in time for Chanukah, Kislev, 5772! Hebrew Bananagrams launched in Israel this past summer to much praise and fanfare from Anglo-Israelis that know and love the game along with the Bananagrams’ uninitiated. Named Toy Fair 2009’s “Game of the Year,” Bananagrams is a fast and fun anagram game that drives players bananas! Requiring no pencil, paper or board, Bananagrams comes in a small portable banana-shaped pouch and is perfect for kids age seven to 97 at home or on the go. 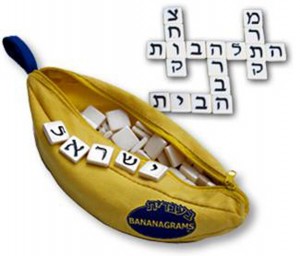 Created by the word game-obsessed Nathanson family of three generations, ranging in age from seven to 75 years old, Bananagrams is a labor of love that that has quickly become an international phenomenon.
“We are beyond thrilled to release Hebrew Bananagrams,” said Rena Nathanson, CEO aka “Top Banana,” Bananagrams, Inc. “Bananagrams is already bigger than our wildest dreams with more than five million of these little yellow pouches floating around the world, and this opens up the fun to a whole new audience. We’re particularly excited for Hebrew Bananagrams because we continuously receive feedback from our fans that Bananagrams is a wonderful Shabbat — or anytime — activity for the whole family, and now we can offer that same unique inter-generational experience to Hebrew speakers around the globe!”
Hebrew Bananagrams can be played on various levels, making it a fun experience to those with only basic Hebrew knowledge, and very challenging for the more advanced player. An educational package will be available with the goal of integrating the game into the classroom.
Hebrew Bananagrams ($19.99 SRP / 99 NIS) is available online now at www.bananagrams.co.il/en and www.levinejudaica.com in the United States.

Join lovable, furry Grover and celebrity host Anneliese van der Pol (That’s So Raven, Broadway’s Beauty and the Beast) as they travel to Israel in this 12-part award-winning DVD series co-produced by Sesame Workshop, the nonprofit organization behind Sesame Street, and Israel’s Channel HOP! Designed to help bring the vitality of Jewish culture and tradition, as well as the diversity of Israeli life, to American children and their families, each 30-minute, live-action and animated DVD focuses on storylines drawn from Jewish cultural traditions, highlighting lessons on Hebrew letters and words, unique sites in Israel, and Jewish values.
In addition to Anneliese van der Pol, the series features guest appearances by top name talent including Jake Gyllenhaal, Debra Messing, Matisyahu, Eva Longoria, Christina Applegate, Greg Kinnear, Debi Mazar and more!
Culminating a year-long campaign during which individual DVDs were released every few months to coincide with the Jewish holiday seasons, the entire set is now available for the first time. It comes boxed in a handsome slipcase, at a savings of close to $30.00 if purchased individually, making it perfect for Chanukah gift-giving.
Each DVD in the set includes a wealth of over 20 minutes of bonus extras including trailers, sneak peeks of all the titles, Grover’s Video Player (music videos), sing-alongs and Karaoke of favorite tunes like “Aleph Bet Song,” “Rosh Hashanah Hannah” (a spoof of Hannah Montana) and the famous “Rubber Duckie” song (in Hebrew!) among others. One of the highlights of Grover’s Video Player on Adventures in Israel is “There Must Be Another Way” by Achinoam Nini, Mira Awad and the Shalom Sesame puppets — the song that represented Israel in the 2009 Eurovision Song Contest, sung in Hebrew, Arabic and English.
Shalom Sesame 12-DVD Gift Set Collection includes the following titles:
“Welcome to Israel,” “Chanukah: The Missing Menorah,” “Shabbat Shalom, Grover!,” “Grover Plants a Tree,” “Mitzvah on the Street,” “Be Happy, It’s Purim!,” “It’s Passover, Grover!,” “Grover Learns Hebrew,” “Countdown to Shavuot,” “The Sticky Shofar,” “Monsters in the Sukkah,” and “Adventures in Israel.” To order Shalom Sesame DVDs visit www.sisuent.com.