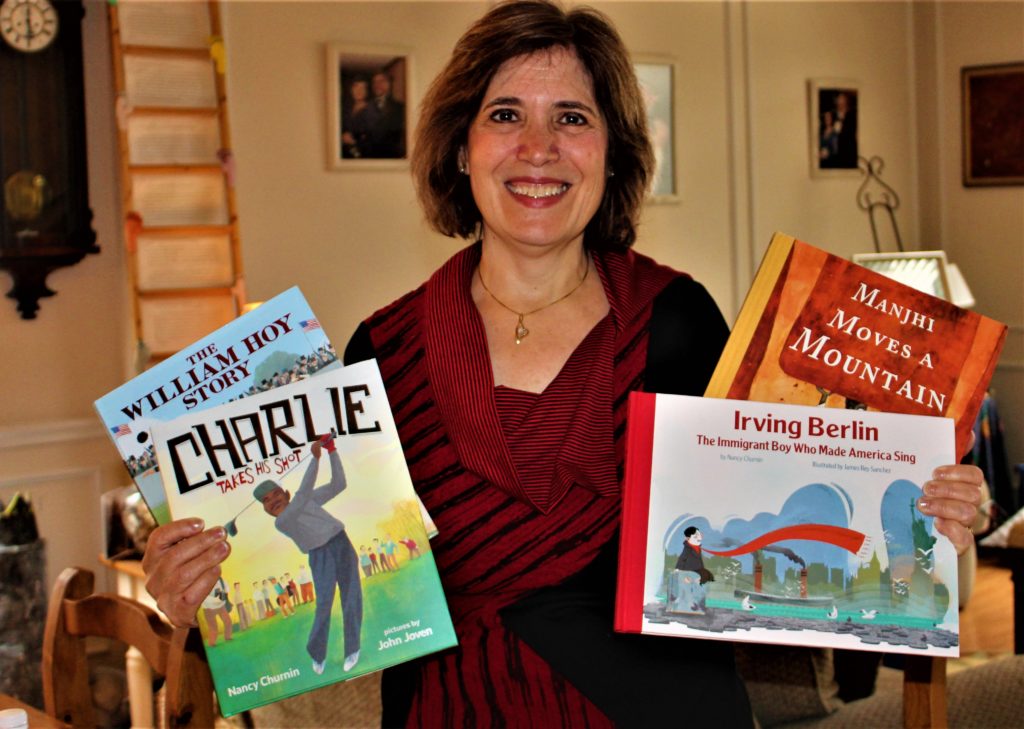 Storytellers must tell and writers must write. Nancy Churnin is doing both at top speed, releasing three books this year, with another on the horizon and two more already published. Churnin is filling bookshelves to reach children, and she couldn’t be more proud.
“It’s really happening. For so long I’ve wanted to tell stories of those who inspire me and who I hope will inspire,” said Churnin, a Plano resident and theater critic for The Dallas Morning News. “I know lives can be changed by children who believe and everyone I write about has been a life-changer.”
Charlie Takes His Shot, published in January by Albert Whitman & Company, is about Charlie Sifford, who was the first African-American to play on the PGA Tour. Featured in the story is Jewish lawyer Stanley Mosk (later a California Supreme Court judge), who helped Sifford fight to play on the Tour.
Available for pre-order is Irving Berlin: The Immigrant Boy Who Made America Sing, to be published this June by Creston Books. The book focuses on the journey of a 5-year-old refugee arriving at Ellis Island who became the grateful patriot, penning God Bless America and donating the song’s earnings to the Boy and Girl Scouts of America.
“Now’s the time to remember that we’re a nation of immigrants,” said Churnin, a native New Yorker with degrees from Harvard and Columbia. “I read in schools, and children are connecting because the ‘coming to America’ part is their story too. Today’s headlines are of dreams coming true. I couldn’t be prouder to give hope to the lyricists, writers, doctors and business leaders of tomorrow.”
“No songwriter started with less and gave more than Irving. His ability to overcome adversity, utilize his God-given gift and leave an everlasting legacy is an inspiration,” said Mark Kreditor who for many years has taught a Jewish 20th Century Music and Arts class through the JCC’s Melton School. He helped Churnin with the Berlin book. “I’m moved by Nancy’s interest in Irving Berlin’s story. He was my father’s favorite, and one I’ve been teaching for years. It’s important we use any opportunity to tell his story to the next generation.”
Kreditor shared with Churnin how Berlin used cantorial melodies he learned from his father, a former cantor in Russia, melding them with the sounds of his new country. One example: the last three notes of God Bless America match the last three notes of the Shema.
“It’s unlikely, knowing this, that you’ll ever not think of one, when hearing the other,” Churnin said. “Whenever I read the words to God Bless America, I see a prayer that could be in any siddur. It’s absolutely beautiful.”
The books about Sifford and Berlin continues Churnin’s streak of picture book biographies. Her others are 2016’s The William Hoy Story: How a Deaf Baseball Player Changed the Game and 2017’s Manjhi Moves a Mountain.
The William Hoy Story, illustrated by Jez Tuya, is about the deaf baseball player who influenced the game with hand signals. It has been translated into Japanese and was named to the 2016 New York Public Library Best Books for Kids list, among other honors.
Manjhi Moves a Mountain, illustrated by Danny Popovici, introduces Dashrath Manjhi, who, with a hammer, chisel and determination, carved through the mountain separating his village from schools, markets and a hospital. A Junior Library Guild and Silver Eureka honoree, it’s on the Children’s Book Council Showcase and is an Every Child Reader 2018 Children’s and Teen Choice Awards finalist, voting open from March 1 to May 6 at everychildareader.net/choice/.
Still coming this year is The Queen and the First Christmas Tree. Next year will come Martin & Anne, the story of Dr. Martin Luther King Jr. and Anne Frank — both born in 1929, both lives cut short because of prejudice.
Churnin, wife of Michael Granberry and mother of Ted, Sam, David and Josh, creates teacher workbooks and projects for each book. The William Hoy project requested letters to the National Baseball Hall of Fame and more than 1,000 requesting his induction have been received. With Manjhi, students submit how they’ve made a difference moving mountains in their communities.
Churnin is requesting readers share how, like Sifford, they’ve given peers a “shot.” Regarding Berlin, readers are posting about their immigrant culture, or that of a friend, or a recipe, activity or tradition.
“As a child I learned about historical figures who played important roles and I’m fascinated with sharing these stories,” said Churnin, who will sign books at the Dallas Book Festival at the J. Erik Jonsson Central Library on April 7, and who looks forward to returning to the JCC Bookfest for yet-to-be-scheduled events. “I hope I’m encouraging them to read and to live their dreams.”
Churnin’s books are available at Amazon.com and barnesandnoble.com and at the Barnes & Noble at Dallas’ Lincoln Park, many autographed by the author.