Yavneh Academy of Dallas is pleased to announce that seniors Abbie Denemark and Leora Mitzner scored in the top five percent nationally on the 2009 PSAT and therefore received the honor of “Commended Student” in the 2011 National Merit Scholarship Program. About 1.5 million juniors in 22,000 high schools entered the program. 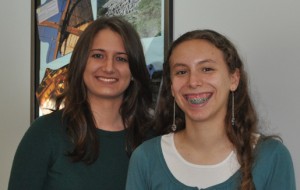 “Both of these young women are very intelligent, multi-talented, successful and respected by faculty and peers. They are keen examples of Yavneh’s student body,” said Head of School Donald O’Quinn. “Abbie and Leora achieved these scores without outside tutoring, a testament to both their intellect and the college preparatory curriculum that Yavneh affords our students, as taught by a premier faculty.”
“Recognition of academically talented students and the key role played by schools in their development is essential to the pursuit of educational excellence in our nation,” said Sharon R. Smith, vice president of educational and scholarship services for the National Merit Scholarship Corporation. “The young people being named Commended Students have demonstrated outstanding academic potential by their strong performance in this highly competitive program. We hope that this recognition will help broaden their educational opportunities and that they will continue to pursue scholastic excellence.”

Chosen from more than 91 eligible regional chefs within 88 Brookdale Senior Living communities locally, Chef William Anchondo of Town Village North Dallas, a Brookdale Senior Living retirement community in Texas, has earned the regional culinary honor of 2010 for participating in Ultimate Chef America.
Throughout 2010, the culinary professionals of Brookdale Senior Living, leading owner and operator of senior living communities throughout the United States, put on a yearlong series of first-class cooking competitions nationwide from Phoenix to Jacksonville, Fla. with stops along the way in Dallas, Denver, Detroit and Atlanta. At each event, two teams of senior living chefs had two hours to produce four courses with the theme of healthy cooking, using only a grill.
Dishes prepared by the chefs were judged on-site by a panel of five celebrity judges headed by Leeza Gibbons and a Brookdale resident with a culinary background. The teams won awards for taste, creativity and presentation. In addition, each individual chef was awarded points on his or her dish.
Each event showcased the talents of Brookdale’s professional chefs, who created dishes that were not only flavorful and unique, but were made especially for less sensitive senior palates. Anchondo’s team prepared a seafood duo with red pepper coulis, grilled lamb chops with orange berry sauce and a fruit napoleon. They won “Best Taste” and “Best Creativity.” Anchondo prepared the side, which was pan-Asian whipped potato duo and Asian vegetable toss.
Born and raised in Washington, D.C., Anchondo cites his mother as a wonderful cook and culinary mentor. He attended La’Acadamie de Cuisine in Bethesda, Md. after graduating from high school, and worked in several restaurants in various kitchen positions. In 1987, Anchondo began with Club Corp., and remained with them for 19 years. During that time he moved up in the ranks, progressing from pantry cook to executive chef. While employed with Club Corp. he participated in its corporate culinary competition at the Culinary Institute of America in Greystone, Calif. three times. Anchondo is the director of dining services at Town Village North Dallas, and began in February 2009.
“Cooking for seniors requires special training and expertise because the sensitivity of taste buds and palates change with age, so the flavors have to be bolder and richer and the textures of foods need to be more ‘senior-friendly’ as well,” said Joska Hajdu, Brookdale’s senior vice president of dining services and an executive chef by trade. “That’s one reason why the participating chefs and their creations are special; they are created with passion and an intensity that surpasses food served in other venues.”
Ultimate Chef America, however, was much more than a professional cooking competition. Each event was a celebration of great food and life fulfillment. In each of the six locations, residents and guests were in the audience for live talk shows with celebrity judges and senior health and culinary experts that were streamed over the Internet and broadcast to other Brookdale communities. The competition also featured seminars on food, wine and seasonings, presented by experts on each topic. There were also guided tours of the host community; a silent auction benefiting the Leeza Gibbons Memory Foundation and its signature program Leeza’s Place, “A Place for Caregivers,” a community gathering place and resource center for family caregivers impacted by chronic or progressive illness; and a business expo highlighting the event’s sponsors, including Nestle Vitality, Nestle Professional, Advanced Foods, Walgreens, Tyson Foods, Royal Cup, Fidelity Print, Ecolab, SCA and Entegra.
The six events have welcomed, entertained and served almost 5,000 guests. The silent auctions conducted at the events have raised more than $100,000 to support the work of the Leeza Gibbons Memory Foundation and $16,000 to help the victims of the earthquake in Haiti.
“Ultimate Chef America also gave our residents and those considering a move to a Brookdale community a first-hand experience with our concept for living, Optimum Life,” said Sara Terry, vice president of Optimum Life for Brookdale Senior Living.
A way of life offered exclusively by Brookdale Senior Living at its communities, Optimum Life®, focuses on six key dimensions – emotional, intellectual, physical, social, spiritual and purposeful.
More information about Ultimate Chef America can be found at www.ultimatechefamerica.com and www.facebook.com/ultimatechefbrookdale.

Jewish Family Service will again participate in the annual Feinstein Challenge to fight hunger. From March 1 through April 30, The Feinstein Foundation will give a percentage match to agencies which participate and spread the word about this opportunity. Every food item and/or cash donation made to Jewish Family Service’s Food Pantry counts!
Please help by spreading the word and organizing a food drive in your neighborhood, school, congregation, team, or group.
It is through donations that JFS was able to feed more than 2,600 people last year, and the numbers are increasing.
Call or e-mail for a list of needed food items or if you have questions, 972-437-9950 or info@jfsdallas.org.