It’s been some time since I’ve been able to duck out on Tuesday night (a.k.a. paper day) and attend a community event. But thanks to the crackerjack TJP staff these days, I was afforded the opportunity to attend the Dallas Holocaust Museum/Center for Education and Tolerance’s Hope for Humanity Award at the Fairmont Hotel downtown last week. 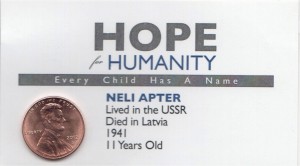 I wasn’t alone. More than 1,100 gathered to watch Don Glendenning accept the award and to be inspired by his remarks, as well as those of Rabbi Andrew Paley; last year’s honoree, Frank Risch; chairman Hylton Jonas; and DHM/CET president/CEO Alice Murray.
A highlight of the evening was a chamber-theatre style performance of “Stories of Life,” a play developed for the DHM/CET by Dallas playwright Nicole Stewart. Four local teen actors portrayed two pairs of siblings then in the Terezin ghetto and present day. The play drilled down to the heart of two themes central to the organization: hope and being an upstander.
At one point in the evening, Murray pointed to small cards at each place setting. On each card was the name of one of the 1.5 million children who were murdered in the Shoah and a penny.
“By accepting this card you are becoming a guardian of this one child’s memory, giving voice to their name that they shall not be forgotten,” the card read. Everyone then simulaneously read their name aloud. Please remember with me Neli Apter. Lived in the U.S.S.R. Died in Latvia in 1941. He was 11 years old.

Thanks to Judy Miles, who shared some delicious news from Adat Chaverim in Plano.

Kugel lovers gathered Oct. 14 at the synagogue for the inaugural Kugel Kapers, presented by the synagogue’s membership committee.
With 12 kugels on display, the adult guests were prepared to sacrifice their evening (and their waistlines) in an attempt to taste and evaluate the merits of each.Faith Retsky’s chocolate kugel won the vote, in which attendees picked their favorite by placing a $1 bill in a box displaying the baker’s name.
Other entries, according to membership chair Bobbie London, were a Jerusalem kugel made with thin noodles, a kugel with cherries, a potato kugel, and several “regular” kugels made with cottage or cream cheese and sour cream, and flavored according to the taste of the baker. Salads and desserts completed the menu.
Children in attendance were happy to eat and run when they discovered that entertainment was being provided by a DJ. They hula-hooped, limboed, danced and sang, and most didn’t leave the dance floor until the music ended.
Bakers included Natala Assa, Sharyn Diamond, Darby Drake, Anita Freeman, Tiffany Fullman, Dana Goldstein, Lee Greenstein, Linda Kalman, Valerie Klein, Faith Retsky, Susan Schwartz and Susan Shniderman.
Committee members who helped organized the event were Sharyn Diamond, Hope Robins, Susan Schwartz, Steve Sloan and Sheri Wald.

Amy Applebaum, past president and current treasurer of the Dallas Chapter of Hadassah, will share her experience at the Hadassah Convention in Israel at 10 a.m. Monday, Nov. 12 at the Aaron Family JCC.
Several Hadassah members attended the centennial celebration and the opening of the new medical tower and will share their experiences. Join Herzl members in the conference room, where coffee and cake will be served.
If you’d like to make reservations for lunch at the J after the meeting, contact the seniors office, 214-239-7119. Cost for the hot lunch is $3.50.