She was an “unsinkable Molly Brown.” Barbara Goldstein, a successful Texas artist for more than 40 years, was driven to see the world and develop her artistic talent. A dynamic and pioneering artist, she overcame personal obstacles, championing and advising women on successful, independent travel. Her advice came across as if she was having a cup of coffee and a friendly chat while sitting across from the reader.

Her creativity, outgoing style, and desire to draw anything at any time led to her first published work. While sitting at the Fort Worth Zoo, creating ape and orangutan images, she met an Australian man gathering information about monkeys and apes for a children’s book. He was looking for an artist who could illustrate the book with humorous and imaginative drawings.
She began to study Spanish in the early ‘60s and decided the following summer to take her children — GeGe, Tere, and Red — to a place where they could learn Spanish and art and become acquainted with another culture. For the next four years, San Miguel de Allende, Mexico became their summer adventure. And in 1993, the year after the death of her beloved husband, Dore, she took up residence in San Miguel.
One of her proudest accomplishments in Fort Worth was becoming a “Signature Member” of the Southwest Watercolor Society. Beyond Fort Worth she became a world traveler, exploring, making friends, teaching and capturing scenes in Israel, Kenya, Bali, Paris and Brazil, among others. As an accomplished teacher and artist, her pastels, watercolors and unique multimedia paintings became prized possessions. In her early years, portraits were her main focus. As she grew in her craft, her subjects became primarily Judaica and flowers.
Goldstein’s youngest, her son Red, has vivid memories of his mother. “She was always an artist with fierce determination…for whom ‘no’ did not exist,” he said. “Her eye could absorb an image, release it back via paint brush, and filter it through her brilliantly creative soul,” he added.

In Goldstein’s book, Travelin’ Lady: How to Travel Alone Without Being Lonely, she noted that she and Red had an especially open way of speaking together. He once asked her on his and his sisters’ behalf about creating a show of her work in Fort Worth for the first time.
Her plan was to travel to Paris to create new paintings just for the Fort Worth show. She was worried about being productive in a change of atmosphere, but a dear friend helped her arrange all the details. And, a little luck and her travelin’ lady skills made all the difference. Flying to Paris, she wound up sitting next to James Moody, Dizzy Gillespie’s right-hand man.
She shared her worries. He explained, demonstrated, and then involved her in experiencing how music could be created no matter how the eight musical sounds were arranged on a sheet of lined music paper.

He went on to tell her, “You never wrote music before. You’ve never painted in Paris before. You just lead with your heart of art and your past experience. You will soon be playing colorful music with your brushes no matter where you are.”
She called his advice a vote of confidence and a jump-start. During four months in Paris, she created 22 paintings. “My show in Texas was a huge success, and my grown kids were glowing with pride,” she said.
Selections from her wonderful Paris collection and many other works can be seen in the Temple Board Room starting this month.
— Submitted by Arlene Reynolds

Mitzvahs in the Sukkah

Tarrant County religious schools and PJ Library will do Mitzvahs in the Sukkah from 10 a.m. to 11:30 a.m. Sunday, Oct. 8, at Ahavath Sholom. Learn all about Sukkot while reading, creating, making edible sukkahs and singing with Eli Davidsohn! The program is for all children ages 3 to third grade. If your child is in religious school, they’ll be attending with their classes. Need a ride? Free bus transportation is available from Congregation Beth Israel in Colleyville and Chabad of Arlington and Mid-Cities in Arlington. Please visit tarrantfederation.org for details.
A parents’ nosh begins at 9:30 a.m. Have a bagel and schmear to meet and get to know other parents before the Mitzvahs in the Sukkah program!
Mitzvahs in the Sukkah is sponsored by the Jewish Federation of Fort Worth & Tarrant County, Congregation Ahavath Sholom, Beth-El Congregation, Congregation Beth Israel, Congregation Beth Shalom, Chabad of Fort Worth and Chabad of Arlington and Mid-Cities with financial support from the Dan Danciger/Fort Worth Hebrew Day School Supporting Foundation. 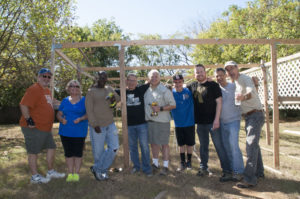