Cantors’ voices sure to be sweet treat

Temple Emanuel will host this year’s Community Cantor Concert at 7:30 p.m. Tuesday, May 16, in the Tobian Auditorium.
Featured will be Cantors Vicky Glikin and Leslie Niren from Temple Emanu-El; Cantor Itzhak Zhrebker from Shearith Israel; Cantor Sheri Allen from Congregation Beth Shalom; and Cantor Devorah Avery and Emeritus Cantor Don Croll from Temple Shalom. This year’s theme is “Sweet as Honey.” Joining the cantors will be the Temple Emanu-El and Temple Shalom choirs as well as musicians from Shearith Israel.

Cost of the concert is $10 general admission or $36 for reserved seats. Tickets can be purchased online at https://participate.tedallas.org/communityconcert or at the door.

Elizabeth L. Silver, confirmed in 1997 at Congregation Shearith Israel and graduated from Highland Park High School, will discuss her latest book, The Tincture of Time: A Memoir of (Medical) Uncertainty, at 7:30 p.m. Thursday, May 18 at the Wild Detectives Bookstore, 314 Eighth St., Dallas.
Set against the unexplained stroke of the author’s newborn daughter at six weeks, this stunning, unflinchingly honest memoir is a thought-provoking reflection on uncertainty in medicine and in life. Oprah Magazine described the book as “a delicate weave of cultural analysis, personal history, and religious teachings in a meditation on the limits of science and the boundless capacity of the human heart.” 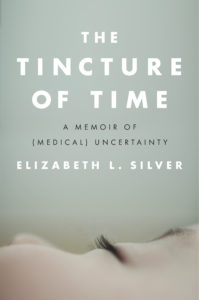 Her debut novel, The Execution of Noa P. Singleton, received national acclaim and was published in seven languages and option for film.
Elizabeth’s writing has appeared in McSweeney’s, The Huffington Post, The Rumpus, The Los Angeles Review, The Millions and The Dallas Morning News, among other publications, and she has been a writer-in-residence at several artist colonies in the United States, France and Spain. A graduate of the University of Pennsylvania, the MA program in Creative Writing from the University of East Anglia in England, and Temple University Beasley School of Law, Elizabeth has taught English as a Second Language in Costa Rica, writing and literature at Drexel University and St. Joseph’s University in Philadelphia, and worked as an attorney in California and Texas, where she was a judicial clerk for the Texas Court of Criminal Appeals.
Elizabeth is currently working on a new novel, and several film and TV projects. Born and raised in New Orleans and Dallas. Elizabeth is the daughter of Kathi and Charles Silver of Dallas; she lives in Los Angeles with her family.

Father-and-son duo, David and Brad Schweig, of Sunnyland Outdoor Furniture in Dallas were recently named Home Furnishings Association Retailers of the Year in the category of businesses with a sales volume under $10 million.
Sunnyland is the first casual furniture retailer to win HFA’s Retailer of the Year award. This 47-year-old company is the largest outdoor and patio casual furniture store in Texas with a 37,000-square-foot showroom, clearance center and on-site distribution center. David prides himself on working in an industry “whose primary purpose is to improve the quality of life of customers by providing them with comfort and relaxation.”
David and Brad Schweig will receive their awards and be celebrated at the 2017 Home Furnishings Association’s Retailer of the Year awards event, June 5 at the annual Home Furnishings Networking Conference in San Antonio.