Double Congratulations to Sandra and Allan Cantor. Allan was appointed National Officer of the Day at the Jewish War Veterans and Ladies Auxiliary National Convention in San Antonio (Aug. 27-31). Meanwhile, Sandra Cantor was elected junior vice president of the Auxiliary.
The Department of TALO (Texas, Arkansas, Louisiana, Oklahoma) hosted the national convention and showed their Southern hospitality to the largest group of delegates in a very long time. It was not sure the event would even occur due to the forecast of “Harvey”; however, the convention went on and there was one couple from Houston in attendance, National Officers pledged to help JWV members affected by the floods. Next year’s convention will be held in Tampa, Florida.

Hallie Weiner has joined Temple Shalom as youth adviser. She loves working with kids and has been teaching for all of her adult life. Originally from Los Angeles and the daughter of a cantor, Hallie grew up steeped in Judaism feeling that the synagogue was her second home. That is the feeling she hopes to transmit to the Temple Shalom youth. In addition to youth director at Temple Shalom, Hallie is a preschool teacher and cantorial student.

Tiferet Israel welcomes back Cantor Howard Shalowitz to sing and daven at their High Holy Day services. Cantor Shalowitz first led services at Tiferet in 2016. The congregation found that his music enhanced the service and invited him back for a second year.
Cantor Shalowitz has led services and lectured on Jewish music throughout the United States, and served as High Holy Day chazzan at synagogues in New York City, in Florida and on kosher cruises. He serves on the Cantors Assembly’s (CA) Executive Council and as the chairman of the CA’s Ambassador Program Committee. He is the past president of the St. Louis Circle of Jewish Music and is a frequent guest lecturer on Jewish music. He has written, narrated, and produced television programs for the Jewish holidays. He won a national Telly Award as co-host of the weekly television show See/Hear.

Chazzan Shalowitz began singing at the age of 10 as a boy soloist in various High Holy Day choirs in Chicago. He also made recordings on radio and television. He attended Tulane University, where he sang lead roles in operettas and sang with the New Orleans Symphony. He also served as chazzan at Tikvat Shalom Congregation. He received his Bachelor of Arts degree plus his Master of Arts at the University of Pennsylvania and attended the Jewish Theological Seminary of America Cantorial School.
In addition to his accomplishments in music, he is well-known in the St. Louis area as a successful attorney. He has served as president of the Bar Association of Metropolitan St. Louis and the St. Louis Bar Foundation and has served on the Board of Governors of the Missouri Bar. He has hosted the weekly television show, Legally Speaking in St. Louis. He received his Juris Doctor degree from Washington University School of Law in St. Louis.
If you would like to attend services at Tiferet Israel for Kol Nidre (Friday evening, Sept. 29) and Yom Kippur (Saturday, Sept. 30) please call 214-691-3611 or email Jennifer@TiferetIsrael.org.
For more information, contact Ed Jerome at 214-696-1111.

National Diaper Awareness Week is Sept. 25-Oct. 1. Throughout October, JFS will hold its annual Diaper Shower.
Stock the JFS Food Pantry with infant to adult diapers, pull-ups and wipes for community families in need and help reach the goal of 100,000 diapers again! Drop-off is from 1 to 3 p.m. Sunday, Oct. 22, at the JFS Food Pantry, 5402 Arapaho Road, Dallas. You can also drop items off at the following locations throughout the month:

The 2017 Diaper Show co-chairs are Cathy Glick, Julie Liberman and Beverly Rossel.
— Submitted by Jamie Denison
Farm-to-City Sukkot Celebration
The Jewish Community Center of Dallas (The J) will host a Farm-to-City Autumn Sukkot Celebration from 5 to 8:30 p.m. Tuesday, Oct. 10 on its campus at 7900 Northaven Road in Dallas. This communitywide celebration will include an interfaith twist recognizing autumn’s transition from summer to winter. It is part of The J’s “Let’s Get Social” initiative, which brings together the community in a variety of new and different ways to help people connect and interact beyond social media.
Farm-to-City Autumn Sukkot Celebration activities will include Goat Yoga led by Woni from 5 to 6 p.m. ($10 members/$15 non-members and online registration is required) and FREE Hayrides from 5 to 7 p.m. Other no-cost activities include arts and crafts in the J On Wheels trailer, miniature candy sukkah building, a live DJ and country line dancing, and displays by local vendors. Seasonal foods will be available for purchase and attendees will enjoy refreshments such as wine and seasonal treats.
More information is available at jccdallas.org or by contacting Terri Arends at tarends@jccdallas.org.

On Sunday, Sept. 10, the halls of Temple Shalom were filled with learning and laughter.
Children in kindergarten through seventh grade joined together for the first day of religious school.
“Temple Shalom Religious School is off to a great start! We have added several exciting new programs for students and families, a brand-new Judaica curriculum and, perhaps most exciting for our students, a Gaga Pit,” said Director of Lifelong Learning Rabbi Ariel Boxman.
Some new programs include: a monthly playgroup for moms and babies (ages 0-2) called Temple Shalom Mamas, a Junior Youth Group, a Tribe Program to promote bonding among students in school and a Temple Shalom BBYO Chapter for eighth- to 12th-grade students.
New programs are mixed in with old favorites: monthly spirit days, blessing of the pets, munchkins minyan and of course fun-filled Jewish holiday celebrations.
— Submitted by Lisa Rothberg 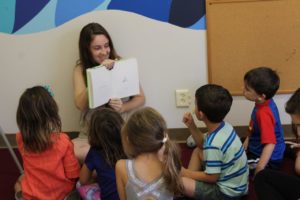