Congregation Beth Torah’s annual 24-hour Holocaust vigil begins Saturday night, April 22, as people from many faiths in North Texas gather to read the names of thousands of people murdered in the Holocaust.
The Men’s Club at Congregation Beth Torah, a Conservative synagogue in Richardson, has organized the “Reading of the Names” event every year since 2002 to preserve the memories of the Nazis’ 11 million victims, 6 million of them Jews.

“Most of the victims were only known by a number and were never given a proper
memorial,” said Ed Matisoff, co-chair of the project. “The Dallas community has the opportunity to keep their memories alive by reading and listening to the names. It’s both an obligation and an honor for us to do this.”
The event begins at 9 p.m. April 22 with a moving candlelighting ceremony in the synagogue sanctuary. The theme is “Unto Every Person There Is A Name,” the title of a classic Israeli poem about the Holocaust.
Then, in 15-minute shifts, volunteers of all ages and faiths read the names, ages, and hometowns of individual victims, as well as the dates of their deaths. The details are supplied by Yad Vashem, the Holocaust memorial, museum and research institute in Jerusalem, as well as the United States Holocaust Museum. The readings pause periodically for the Kaddish, the Jewish prayer for the departed.
“The entire community is invited, and we’re very gratified that more people join us every year, both as readers and to listen to the names,” said Jeff Markowitz, co-chair of the project. “It’s hard to put into words just what an emotional, meaningful experience this is for everyone involved.”
Some of the spiritual leaders taking part this year include Rabbi Elana Zelony of Beth Torah; Shakeel Muhammad of the Islamic Association of Collin County; Dr. Robert Chishold, Jr. of the Dallas Theological Seminary; and Dr. Michael Perry of King’s Right Hand Ministries. Representatives of many houses of worship, schools, and organizations will participate, and some readers will take part from around the world through Skype.
The Reading of the Names continues through the night, and then will pause at 9:30 a.m. on Sunday for a breakfast program featuring Cheryl Drazin, director of the Anti-Defamation League’s North Texas/Oklahoma regional office. She will discuss the organization’s battle against bigotry, prejudice, and anti-Semitism in the current political environment.
The readings will then resume, culminating in a closing ceremony that ends at 9 p.m.
The Reading of the Names program is unique in North Texas, and Beth Torah Men’s Club has been honored by the national Federation of Jewish Men’s Clubs for organizing it year after year.
“Reading of the Names is sacred at Beth Torah because it helps us grasp the enormity of the loss during the Holocaust as well as gives us a feeling of solidarity with one another and determination to make the world a better place,” stated Rabbi Elana Zelony, Beth Torah’s spiritual leader.
Congregation Beth Torah is located at 720 W. Lookout Drive in Richardson, near the crossroads of Bush Turnpike and Central Expressway. For more information, or to request the opportunity to participate in the program, call the synagogue at 972-234-1542, ext. 227.
— Submitted by Laura Matisoff

Veteran filmmaker Cynthia Salzman Mondell’s newest short will screen this week at the Texas Women’s Caucus for Arts’ Vignette during Dallas Arts Week through April 9, at the former Women’s Museum Building in Fair Park.
Mondel explained what inspired the project. 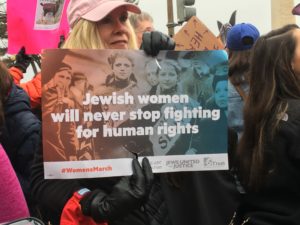 “After the Democratic Convention, I was elated with the possibility of witnessing the election of the first woman president. I thought about my grandmother, who could not vote until 1920; about my mother, who taught me to vote; and about my legacy, my daughter, Fonya.
“I bought my tickets to be at Hillary Clinton’s inauguration. I was devastated when she lost. When I heard about the Women’s March, I knew I was going. After all, I already had my plane tickets and a place to stay. And I needed to get back on my feet and keep fighting for women’s rights.
“In my six-minute video, I hoped to capture the excitement, the camaraderie and diversity of the March. Signs, music and dress were artistic and political expressions of both women and men. And I collected some great shoe stories for my Sole Sisters film.”
The Women’s March opened Wednesday, April 5.
On Thursday, April 6, from 3 to 4:30 p.m., Cynthia will join other female industry leaders for a panel discussion. The film screens daily. For more information visit https://texaswca.org.

On March 29, The Cedar Hill ISD Theatre Arts Department presented Sending Down the Sparrows, a play which calls attention to the systematic persecution and extermination of the handicapped by Nazi Germany through the character of Viktor, a young man who is a reluctant member of the Hitler Youth.
Viktor has a mentally handicapped sister who is the ward of a state institution. The theatre arts and CHISD communications departments hosted the performance for community groups uniquely connected to the subject of this play. Among those in attendance were a group of Holocaust survivors. Last month, six schools competed in the UIL district-level theatre competition, and CISD was one of three that will move forward to the bi-district round.