Congratulations to Michael Waldman, partner and president of Employee Benefits at Waldman Bros, who was recently named a 2015 Young Gun by Insurance Business America. The award recognized him for business achievements and employee development.
“This honor speaks to the hard work and dedication of Michael. He has consistently put forth to deliver successful insurance strategies to support the interest of our client base,” said Steve Waldman, CEO and co-chairman of the board, Waldman Bros. “Throughout his career, his significant contributions have not only strengthened and expanded our overall business, but also provided valuable counsel to our team as well as partners.”
Michael developed Waldman Bros’ innovative discount benefits program which has helped reduce claims exposure for employers, resulting in improved renewal rates on their employee benefits plans. This in turn offers affordable and streamlined benefits that appeal to a wide variety of the population, while simplifying and expediting access to medical care.
During his tenure, Michael led Waldman Bros to become one of the first employee benefit firms to implement a minimum essential coverage plan to provide health benefits for companies trying to find affordable ways to comply with the Affordable Care Act. Additionally, he assisted employees as well to achieve compliance with the individual mandate while guiding employers to reduce claims and utilization rates on medical expenses.
He is actively involved in the community, serving on the board of trustees for the Dallas Jewish Community Foundation and the boards of the Jewish Community Center (JCC) of Dallas, Congregation Shearith Israel, and the Greenhill Alumni Association. Additionally, Michael is actively involved in various roles with Walk MS: Dallas and the Jewish Federation of Greater Dallas, and just completed the Wexner Heritage Program.
He is also past president of the Dallas Jewish Historical Society.
The Young Guns awards program honors 42 talented young professionals aged 35 and below who have made a significant impact in the insurance industry. The list includes brokers, underwriters, CEOS and promising young producers who have made contributions despite their limited years of experience, and have added value to their respective workplaces and the industry as a whole.
For the full list of 2015 Young Guns, visit: www.ibamag.com/rankings/young-guns-2015.
Jerry Benjamin returns from DC
Jerry Benjamin, past commander of the Dr. Harvey J. Bloom Post No. 256 of the Jewish War Veterans of America, and past department commander of TALO, is now currently serving as vice president of the National Museum of American Jewish Military History in Washington, D.C. Jerry recently attended a panel discussion on “The U.S., Israel, and the Future of the Middle East.” This program was  coordinated by the Friends of Israel Initiative in conjunction with the Dallas Committee on Foreign Relations and the National Center for Policy Analysis.
The panel consisted of Jose Maria Aznar, former president of Spain and chairman of Friends of Israel Initiative; former Ambassador John Bolton, United Nations; and Colonel Richard Kemp (retired), former commander of British Forces in Afghanistan. It was moderated by NCPA President and CEO Lt. Col. Allen B. West (retired).

Mazal Tov to Mesorah High School Senior Rochie Pacht, daughter of Rabbi and Mrs. Shlomo Pacht, who has been named a Commended Student by the National Merit Scholarship Program.
Commended Students placed among the top 5 percent of the more that 1.5 million students who entered the National Merit competition by taking the 2014 PSAT/NMSQT.
“The young men and women being named Commended Students have demonstrated outstanding potential for academic success,” commented a representative for NMSC. “These students represent a valuable national resource; recognizing their accomplishments, as well as the key role their schools play in their academic development, is vital to the advancement of educational excellence in our nation.”
Rochie plans to attend Landers College for Women/Touro College next fall.

Dr. Michael Weisberg, a Plano physician who has written a cautionary novel about modern health care, will be the guest speaker at Congregation Beth Torah Sisterhood/Men’s Club breakfast on Sunday, Nov. 8.
The veteran gastroenterologist’s book, The Hospitalist, is being praised by journalist Kurt Eichenwald as “a terrifying tale that takes readers deep inside the modern health care system, exposing the economic and professional forces destroying the ability of doctors to do their jobs.”
He added, “Anyone seeking treatment in a hospital must first read this book.”
The public is welcome at the monthly lox-and-bagel breakfast, which begins at 9 a.m. The cost is $10, $5 for students. Copies of the book will be on sale for $10.
Beth Torah is located at 720 W. Lookout Drive in Richardson, near the crossroads of Bush Turnpike and Central Expressway.
For more information, call the synagogue at 972-234-1542. 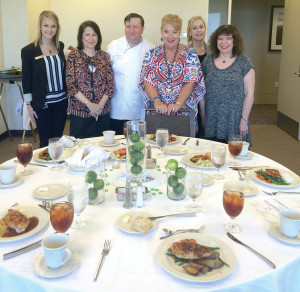