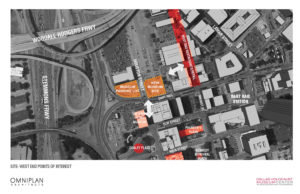 By Harriet P. Gross
Special to the TJP

Four-hundred chairs were set up under the huge white tent, soon to be filled by folks who came crowding in an hour or more in advance of the 10 a.m. start time — to have coffee, chat and offer congratulations. The occasion was Tuesday’s dedication ceremony, a celebratory prelude to breaking ground for the forthcoming new Dallas Holocaust and Human Rights Museum.
The first rows of seats were reserved for the many who had helped make this longtime dream a soon-to-be reality. Among them were 24 of the Dallas/Fort Worth area’s 53 Holocaust survivors, hidden children, and refugees who had escaped in time from the European Jewish hell of World War II. Those  attending were assigned companions to provide transportation and look after their individual charges. Later, they helped pin on each a small golden circlet centered with a torch, symbolic of hope.
The stated theme of the event was “L’Dor V’Dor – From Generation to Generation.” But, not surprisingly, “Upstander” was the most-used word of the day. In recent years, the Dallas Holocaust Museum/Center for Education and Tolerance has popularized it in programming and publicity, stressing the power of those who take action in the face of wrongdoing rather than simply being bystanders — those who watch but do nothing.
Mary Pat Higgins, who as president and CEO has led this major expansion effort, gave a brief history of the institution, which began with a 1977 meeting of survivors. Their desire to honor lost family and friends, and the entire 6 million of Hitler’s victims, led to establishment of the first Holocaust Center. Located in the lower level of the Jewish Community Center, it was later moved to the present quarters on Record Street in downtown Dallas.
This location has provided increased visibility and the broadening of its mission, which Higgins called “the heart of what we do: teaching the past in order to understand the present.” Recent attendance stands at 200,000 visitors annually, with 36,000 students touring and learning from docents and survivor speakers.
Because of this emphasis, young people were heavily featured in the day’s program. “Unlimited,” a Skyline High School vocal ensemble, opened the event with the Hebrew Al Shlosha D’Varim and closed it with a rendition of Journey in Peace, while students from Dallas’ Ann Frank Elementary School, identified by their white and blue shirts, aided the survivors and their mentors.
Sarah Terrace, a teacher at South Grand Prairie High School, told how visits to the museum “help to increase each student’s capacity for understanding and courage for Upstander action, both personally and in the community where they live.” Standing beside her was one of her students, Frances Osato Imarhia, who said “It’s one thing to hear about the Holocaust, but another to see the reality. We keep stories of the survivors in our minds and in our hearts, to stand up – not stand by and do nothing.”
Dallas Mayor Michael Rawlings echoed the importance of retelling those stories and declared that the new facility “will be good for our whole city, building muscle to help us deal with moments of hate.” He drew generous applause as he presented Higgins with a City Council Proclamation declaring Oct. 10, 2017, as Dallas Holocaust and Human Rights Day. But even wilder applause awaited Frank Risch, co-chair of the institution’s Building a Foundation of Hope campaign, when he announced that it has not only reached its $61 million goal, but already exceeded it, and is now well on the way to raising additional funds.
“Four years ago, we started a campaign to triple (the museum’s) current capacity,” he said. “Now we’re heading toward $10 million more, for scholarships, programs, educational resources — always to keep on telling the story. We’ve got to tell the story — it’s more important now than ever.” He too emphasized the “Upstander” theme, stating that “Hatred is a learned behavior, and it can be unlearned.”
Board member and major campaign donor Nate Levine, who has recently become a museum docent himself, brought some in the audience to tears and got a standing ovation with a story of Upstanders — three young boys who had opened a boxcar carrying Jews to a death camp, thereby saving 231 lives. And Board Chair Florence Shapiro spoke of growing up with survivor parents who taught her the importance of learning from the past in order to change the future – of being a bridge between the two. “We are all on that bridge,” she said, “from darkness to brightness.”
Such forward-looking hope had been put forth in the day’s Invocation, given by the Most Reverend George Kelly of the Dallas Catholic Diocese. Rabbi David Stern of Temple Emanu-El chose a current holiday metaphor for his closing blessing, likening the day’s big white tent – a fragile, temporary shelter – to the traditional sukkah. After this, he said, “We will build. May our conscience and commitment rise with this new building.”
Two of those who have a most direct involvement with the building-to-be attended the days’s event: Julie Chesledon and Norm Scrivner represented Pacific Studio of Seattle, Washington, where they are now at work designing 22 Holocaust and Human Rights exhibits for the planned Museum as it approaches the start of construction.
Everyone enjoyed a light brunch before leaving that tent, which for this dedication ceremony occupied much of  the former parking lot where the new Dallas Holocaust and Human Rights Museum will stand. The actual groundbreaking took place after the tent was removed; the new structure is scheduled to open in the summer of 2019.