On July 22, Congregation Shearith Israel cooked up 10 briskets, 10 chickens, eight kugels, six salads, vegetable side dishes and casseroles, nine loaves of challah and countless challah rolls, homemade desserts, an award-winning chili and so much more! It was enough to feed more than 100 Dallas police officers and to make any Jewish mother proud. Feed the Blue, Congregation Shearith Israel’s erev Shabbat outreach to the Dallas Police department, was literally met with open arms last week as about 75 members of Congregation Shearith Israel brought Shabbat dinner to the North Central police station at McCallum and Hillcrest in Far North Dallas.
“We knew our officers were hurting from their loss and we wanted to show our love and support,” said Kimberly Ross, who initiated Feed the Blue with Barbra Applebaum. “I think the officers were overwhelmed by the amount of people and food, but there was no doubt in anybody’s mind that the Dallas Jewish community supports our friends in blue.”
“This is a great example of how powerful we are when the community comes together and stands with each other,” said Barbra Applebaum. “We look forward to finding many ways to support the community in an ongoing basis.”

Remembering the blue while playing for gold

In support of the Dallas Police Department, Team Dallas baseball players will don these caps when they take the field next week at the St. Louis Maccabi Games. 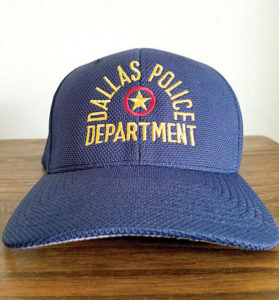