In the late evening of Wednesday, Sept. 28, Ariel Berkowitz of Dallas was on the tracks of the Dallas Area Rapid Transit’s Green Line when the train hit him, dragging him almost 200 yards before stopping. Berkowitz was conscious but his legs were severely wounded.
He was rushed to Baylor Medical Center, where doctors were left no choice but to amputate his legs.
“It is a miracle he is even alive,” said Rena Levy, Berkowitz’s grandmother.
Even more miraculous, Levy noted, is that he suffered no brain damage. 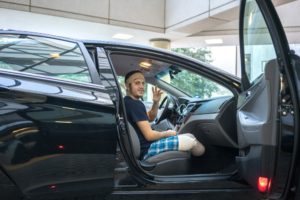 tation. But doctors and nurses told his family they were delighted at his progress. Within a few days at Baylor, he was rolling around in his wheelchair outside of his room. He was even lifting out of the wheelchair too.
Berkowitz was resilient. He was determined to get on with life. That’s just the kind of guy Berkowitz is, according to Levy.
“He’s a good, clean-cut Jewish boy. He is a special kid,” Levy said. “He doesn’t want anyone to feel sorry for him.”
The 19 year old was in his first semester at Brookhaven Community College when the train hit him.
Berkowitz could not be reached following his hospital exit as of press time.
School, including his dream to study meteorology at Texas Tech University, may be on hold.

That’s because his family’s main priority is recovery, rehabilitation and adapting to living without his legs.
But that requires money, and a lot of it.
Because Berkowitz is uninsured, the family is raising funds on the website GoFundMe, which allows people to fundraise for projects via the Internet. They’ve set a $100,000 goal to cover medical expenses, including the hospital stay, mental and physical rehabilitation, as well as prosthetics. As of press time, they have raised $13,158 toward that goal.
Prosthetic legs are a key part of Berkowitz’ rehabilitation.
“His life is sports,” Levy said of Berkowitz.
Berkowitz is a diehard fan of the Dallas Mavericks, where he and his friends were regular and rowdy fixtures at games. In fact, the Dallas Morning News cited a photo of a blue-and-white Berkowitz and his friends, Sammy and Ryan Drei, as among their favorite photos of Mavericks fans.
He’s a devoted fan of the Philadelphia Eagles, too.
Recently the Eagles sent Berkowitz a care package featuring team swag, including a jersey and autographed photo of Eagles’ wide receiver Jordan Matthews. In a note, the team wished him well.
“The entire Philadelphia Eagles organization is thinking of you and wishing you the best during this time,” reads the letter. “We can’t wait to have you feeling better and cheering us on again!”
Such support doesn’t surprise Levy.
“He has never met a stranger, Levy said.
Nor does it surprise Jordan Lewis. That’s because Berkowitz puts himself before others.
Jordan Lewis agreed. Lewis has known Berkowitz since high school. Berkowitz, in fact, was one of Lewis’ first friends in high school after he transferred to public school.
“(He) is an extremely outgoing and kind person. He has always had a positive outlook on life and always looks for the best in people.”
Lewis has been heavily promoting the fundraiser because Berkowitz has always been selfless.
“Ariel is always there for someone in their time of need, now it’s (time for) people to be there for him,” Lewis wrote.
To donate to the fundraiser visit Gofundme.com/helparielberkowitz.

Sweets for a sweet new year