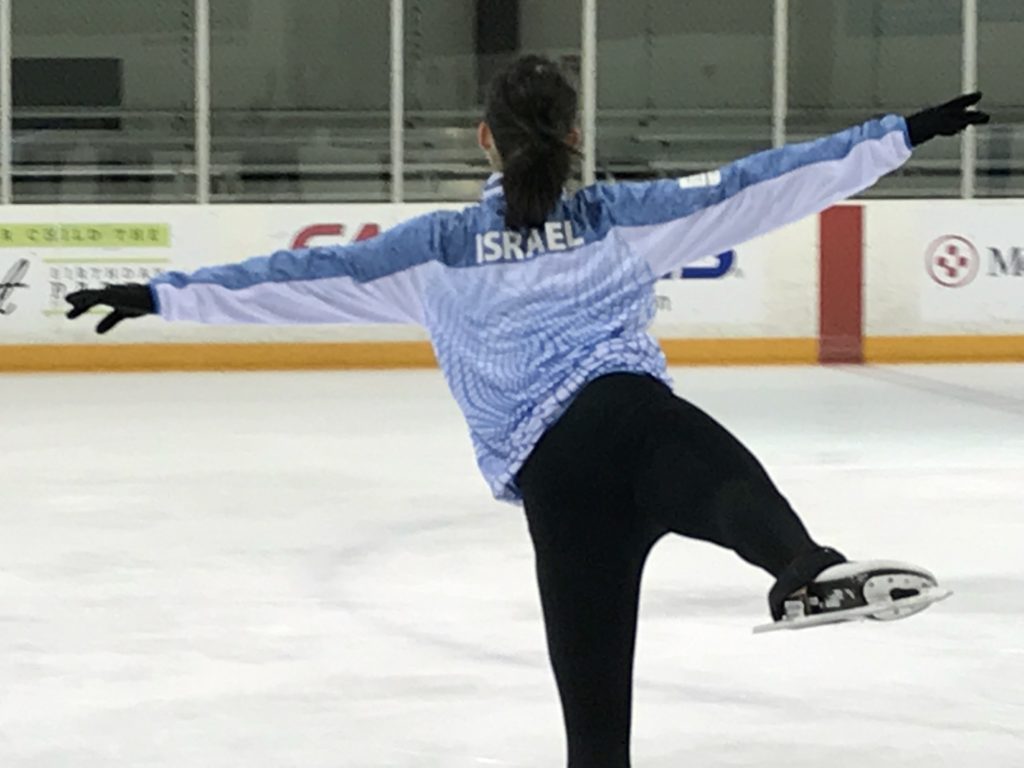 By Jori Epstein
Special to the TJP

Aimee Buchanan isn’t the only local figure skater you’ll find gracefully arching in a layback spin.
But as the 24-year-old Buchanan transitions from her signature arched back to a low crouch, she’s the only local elite skater whose silver Magen David necklace bounces happily with the revolutions. The only skater at Euless’ Dr Pepper StarCenter executing the feat with “ISRAEL” printed in bold, capital letters across her shoulder blades.
Buchanan is the only North Texas athlete who will represent Israel at the 2018 Olympics, which begin tonight.
“It’s very special to literally have my country’s name on my back,” Buchanan said. “I think it just shows that it doesn’t really matter where you’re originally from or what your heritage is. You can be who you are and do what you want all over the world.”
Her next destination to make that statement: Pyeongchang, South Korea. Buchanan is one of seven figure skaters who will compete for Israel in the 10-country Olympic team event on Sunday (Saturday night DFW time). All seven train in North America.
Buchanan smiles when retelling the story of how she wound up on Israel’s national team. She grew up in the Boston area and never visited Israel before her 2014 trip to formally make aliyah. But as Buchanan honed her skating skills as a teenager, she realized Israel would offer more international competition assignments than she could hope to chase on Team USA. In return, Buchanan would help put Israel on the skating map.
She headed to Israel at age 20 with a letter from her rabbi confirming both maternal grandparents were Jewish.
Within six weeks, Buchanan was an Israeli citizen.
Mazel tovs greeted her throughout the country, she says. Her mom, Wendy, received Facebook messages from friends she hadn’t heard from in 20 years. “Thank you” and “fantastic” were common themes as friends and family learned Buchanan would represent the Jewish state. And Buchanan saw an opportunity.
“To really stand with all the struggles that Israelis and all the country of Israel has been through,” Buchanan said. “To be able to stand strong and show the world it’s not just a country struggling — they’re people.”
Wendy Buchanan said she only imagines what Aimee’s late grandparents, who were active in the Jewish community and Jewish causes, would say.
“It would’ve meant a lot to them,” Wendy Buchanan said. “For sure they’d have tears in their eyes. Like, ‘Oh my gosh, this is really happening? You’re doing it? You’re doing it for Israel?’
“They’d be beyond excited and happy.”
Aimee Buchanan said she grew up connected to Judaism but not always knowing why she celebrated which traditions. She went to services on the High Holidays and attended Hebrew school for a few years, before sports and rink time became too demanding. She says she wonders frequently what it would have been like to celebrate her bat mitzvah.
“But at the same time knowing how much I would have had to do for it, I see both sides,” she said.
Olympic dreams, Buchanan realized, require sacrifices.
So, she’s grateful the same skating career that sends her as far as Oberstdorf, Germany and Zagreb, Croatia, also now is bringing her back to her roots.
She’s learning what it means to represent Israel on the international stage.
Sometimes, competing for Team Israel means not competing on Yom Kippur, as Buchanan found out when a competition’s ladies’ free program coincided with the holiday last September. Other times, competing for Team Israel means removing country skating gear outside rink walls and sporting security detail at European meets that other countries don’t need.
Competing for Israel means getting to choreograph a routine to Barbara Streisand’s Avinu Malkeinu rendition. It also means the same program that sends Israeli crowds “crazy loving it” each year at nationals might draw disapproval from European judges.
Judges at one meet in Poland didn’t explicitly attribute Buchanan’s lower-than-normal point total to Hebrew.
“But everyone always says that the artistic scores suffer being from Israel,” Buchanan said. “Because not everyone loves the country.”
The slight only motivated Buchanan to skate stronger, better and more gracefully as the country’s ambassador.
“It shouldn’t matter who you’re skating for,” she said. “Your skating is your skating.
“The country is who you are, not what you’re doing.”
Ahead of Pyeongchang, both Buchanan and her mom are realistic. Israel, after barely scoring enough points to qualify for the team event, is not going to medal against a more talented pool.
But Buchanan’s Olympic berth alone, and the chance to wear Israel jackets and show off her Magen David silver charm to Olympic crowds, is special already. She didn’t expect to qualify after a bursa sac in her ankle drastically reduced her competition schedule in 2017.
She learned on a December trip to Israel that despite the setback, she was an Olympian.
“I was like, ‘OK, now I need to salvage the year and turn it around,’” Buchanan said. “I was over-the-moon happy.”
As Buchanan readies for her Olympic debut in Pyeongchang, her mom thinks back to a game they used to play when Aimee was new to skating, just 5 and 6 years old.
Wendy was careful not to train her daughter, choosing not even to learn the difference between a cheated and clean jump because “that’s between her and her coaches — not her and her mother.”
But the one game Wendy would indulge in was telling Aimee how close to each spin’s start her daughter would land.
“Mom, how far did I go?” 5-year-old Aimee would ask at their local Massachusetts rink.
“You made it to Boston,” Wendy would say of a small veer off path.
“You ended up in Europe,” the refrain came if her landing distance widened.
Twenty years later, Aimee did make it to Europe, as well as to Israel and to Euless, Texas, with her skating.
She’s also now made it to the Pyeongchang Olympics.

Twins, then triplets, for Wollenstein family