Every year, thousands of high school seniors visit college campuses in hopes of finding the perfect fit.
Dylan Ditzenberger found his with his glove, arm and swing.
The Allen third baseman committed to play baseball for the Kansas Jayhawks last fall, and as the school year approaches, he is becoming more and more excited.
“I’m looking forward to living on my own,” Ditzenberger said. 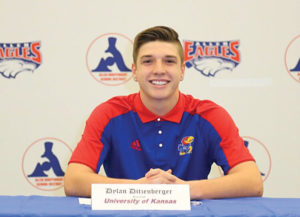 Ditzenberger played his high school ball at Allen, where he maintained a .436 batting average and a .500 on-base percentage. Although he will play infield in college, he really shone as a pitcher in his senior year. He kept a minuscule 0.247 earned-run average, which included a no-hitter in his final district start to clinch the district championship. The District 6-6A MVP helped the Eagles make the playoffs for the first time since Ditzenberger had played for the team.
“We made it all the way to the third round,” he said. “That was great.”
Because of his success, Ditzenberger was selected to play in the Metroplex and Texas High School Baseball Coaches Association all-star games.
Paul Coe, Allen’s baseball coach, told the Dallas Morning News how important Ditzenberger was to his club.
“He’s such a great third baseman it’s hard for us to pull him off there and let him start. He’s a competitor.”
Ditzenberger picked Kansas for its academics, competition in the Big 12 and its legendary basketball program. The infielder played varsity basketball at Allen and competed in the 2015 JCC Maccabi Games in Dallas, and said it had “a really awesome impact” on his recruiting. He chose Kansas over New Mexico, Arkansas, up-and-coming baseball program Dallas Baptist and Texas-Rio Grande Valley in Brownsville.
Before Ditzenberger heads to the Sunflower State, he’ll play in the American Amateur Baseball Congress (AABC) Connie Mack World Series July 28-Aug. 6. His summer team qualified for the tournament by winning a tournament earlier this summer.
Ditzenberger understands that playing time is limited, but expects to compete for an infield position next spring.
“Talking to the coaches, I have just as much chance as anyone else,” he said.