The job of a firefighter is much more than saving a burning building — it’s about saving lives. Sixty-five Texas firefighters were recently trained by their Israeli counterparts so they are prepared to deploy to Israel when disaster strikes. Little did they know may have been needed sooner than later.

Fires broke out in Northern Israel’s Carmel Mountains two weeks ago. All 65 firefighters agreed to go and $50,000 was raised to send them, but they were not needed, as Israeli efforts to douse the fires were successful.
The weeklong training, hosted by the Emergency Volunteers Project (EVP), began Nov. 14 and took place at the Garland Fire Academy. EVP is an organization that recruits and trains groups of first responders who have volunteered to go to Israel in times of war.
Firefighters from fire departments across the Metroplex, including Dallas, Plano, Mesquite and Garland, attended the training. They learned how to extinguish car bombs, work together in small teams and get firsthand experience on the life of Israeli firefighters.
Christy Shannon, EVP Texas training coordinator, said the goal of the project is to enlist American firefighters that are willing to assist in Israel and show Israeli firefighters that they are not alone.

“We train them to work in wartime or crisis situations and teach them how to work with Israeli firefighter teams,” she said. “We want them to know that there are people here willing to help. There is not enough help for Israeli firefighters. Our motto is ‘Help is on the way now.’”
EVP was founded last year by Wade Decker, a Christian Zionist who is the EVP Texas chapter president, and Jewish Dallas businessman Bob Epstein. The original goal was to send 20 Texan Christian volunteers, but hundreds have signed up since its inception.
They recruit for every conceivable need, from firefighters, to paramedics and nurses, to plumbers, electricians and building inspectors. EVP is a nonprofit organization that is supported by the Israeli government, but is funded by Christian Zionist groups and individuals.
Epstein said he saw a need for this program after being on the front lines of the Lebanon war in 2006. EVP volunteers work with Israeli emergency teams in the field and he hopes more firefighters continue to be a part of it.
“I saw what the destruction was like when I was there and realized there was a need for this,” he said. “Our American firefighters are volunteering to go to Israel. They look to Israel as an ally of the United States. In order to help, we need 1,200 more volunteers so we can save 10,000 lives.” 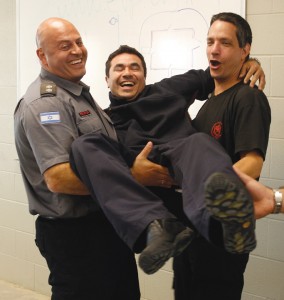 Epstein added that he hopes to recruit 1,000 more firefighters in the next nine months; another training is set for early 2011 in Garland. There are 1,200 firefighters in all of Israel and 1,800 in Dallas alone.
Israeli firefighter Chen Kleiman, one of the instructors during the training, said it is important to properly train American firefighters so they can be prepared for the next war.
In Israel, there are generally two to four firemen sent out for a fire, while in the United States, there are about 12 to 15. With the lack of help in Israel, he said, it’s wonderful for Americans to volunteer their time.
“We don’t have enough manpower for everything we need to do,” he said. “Firefighters all over the world are brothers and it’s great that Americans have accepted our wishes to ask for help. For them to say yes is wonderful.”
Albert Monis, a firefighter in Ramat Gan, just outside of Tel Aviv, said he learned about what it’s like to be a firefighter in the United States and bonded with all the other American firefighters.
Monis works in a city of 200,000 people, and his crew consists of seven people. He believes that having American firefighters in Israel will be incredibly valuable.
“I learned that we have some best friends in Texas who understand our situation and are willing to help,” he said. “It was a great experience for everyone. They are professional and we are happy that they have offered to help.” 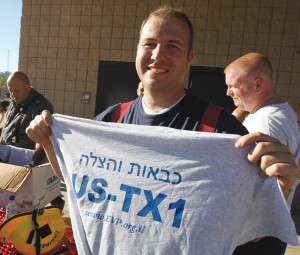 Asah Abras is a firefighter in Jerusalem, the capital city of 800,000 people, and only 110 firefighters serve the region. He said it has been beneficial for the Americans to learn what it’s like to work with a small team during a disaster.
“We all learned so much,” he said. “We explained to them that sometimes, there is a car bomb and house fire at the same time, and they need to prioritize the calls. They learned about our system, which is about using 100 percent of our resources and thinking differently.”
Jeff Miller of the Mesquite Fire Department, said being at the training opened his eyes to what life is like for firefighters in Israel and he is ready to go when he is needed.
“They need help and we are brothers,” he said. “They need us. Here, we have car and house fires, but in Israel, there are rockets falling. I am glad to help any way possible.”
For more information and to donate funds, visit www.evp.org.il, or call Adi Zahavi at 781-467-8775.