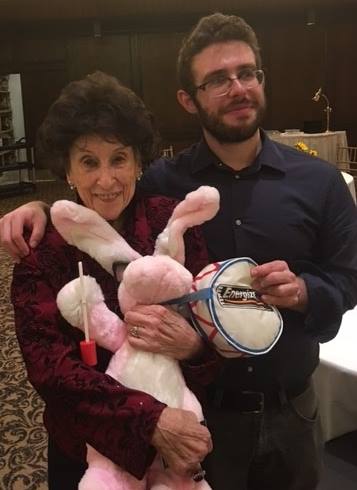 By Katie Ray
Special to the TJP

No one would have expected Norma Ray Gremm to live to be 100 years old; when she was a child she drank a glass of gasoline that was lying around the house because she thought it was water.
She also was hit by a Model T Ford when she let go of her mother’s hand and ran into the street. To top that, she’s a breast cancer survivor. But after she tells these stories she always just laughs and says, “And that is what is wrong with me today.”

She means that if you want to be like her, living and thriving at 100, “you don’t quit talking, you don’t quit laughing and you never die.”
The feisty centenarian will receive a blessing from Rabbi David Stern at Shabbat services Friday, March 10, at Temple Emanu-El.
Norma was born at her grandparent’s house in Dallas, on Feb. 11, 1917, into a large family. The house was filled with people including her mother, Elizabeth Beck Ray; her father, Joseph David Ray; her father’s eight siblings and her paternal grandparents. Norma always points out that even though there was never any money it didn’t matter, because there was always so much love and fun.
When asked what is her favorite memory from all her 100 years, she says it is when she met her husband, Phil Gremm. He was a cousin of her best girlfriend, Jenny. He came in from Muskogee, Oklahoma when Jenny’s sister got married.
She noticed right away that he was good-looking, so when he asked for her number, she gave it to him, but she laughs, “I never heard from him.” It wasn’t until a year later when Jenny got married and he came back in town that the courtship truly started. Norma knew he was the one even though, as she says, he wasn’t a big talker like her. She says he was attractive, nice and modest. After a quick courtship, they got married and moved to Muskogee, where Phil had his own plumbing business.
During World War II after Phil enlisted, Norma moved home to help her mother and her siblings, Ola Ray Leibs, Betty Ray Rosenfeld and baby brother Gerald Louis Ray. After World War II, Norma refused to go back to Muskogee and Phil started Atlas Plumbing in Dallas. It was here they raised their three daughters, Beverly Gremm Fetterman, Judye Gremm and Susan Gremm Alterman.
After Phil sold his business, they enjoyed traveling the world with Ola and her husband Mervin Leibs. They went to Israel, Egypt, Hong Kong, Singapore and more.
Sadly, after 62 years of marriage, Phil passed away. Norma has since spent her time with her family and making sure the stories of her past will continue to be shared. She likes to say “this is history,” to stress their importance. She shares her love of history and family in many ways: by baking her mother’s old recipes (including her legendary mandel bread), showing both old and new photographs from her many family albums and telling stories. One knows that a story from Norma will always make them laugh, as some of her favorites include the pranks her dad did, her many misunderstandings she has had because she is hard of hearing, and the time she laughed hysterically at a funeral because she realized she was at the wrong one.
However, her most favorite tale of all is the time she was stopped in the Waldorf-Astoria by Geraldine Ferraro because her skirt was stuck in her pantyhose. Norma is never afraid to tell an embarrassing story about herself, because she loves to share and bring people joy.
Norma’s 100th birthday party was a giant fiesta with more than a hundred family and friends. Attendees from all over the country came, from states such as Oklahoma, Illinois, Nebraska, California, and Florida. Norma, as usual, was dressed in style, which included heels.
After a serious of toasts, Norma said, “When people ask me what my secret is (to living to be 100 years old) there are a few things that’s going through my mind: good genes, good family, good doctors, good drugs, and just as important as all of that perhaps is having a positive attitude.”
She added that she “wouldn’t be here if it wasn’t for the love and dedication of my three amazing daughters, two sons-in-law (Hank Alterman and Rick Fetterman), one awesome grandson (Evan Alterman), two red-headed granddaughters (Blake Fetterman and Alex Fetterman Price) and two great-grandsons (Isaac Price and Hayden Price), who give me purpose every day and bring me such joy.”