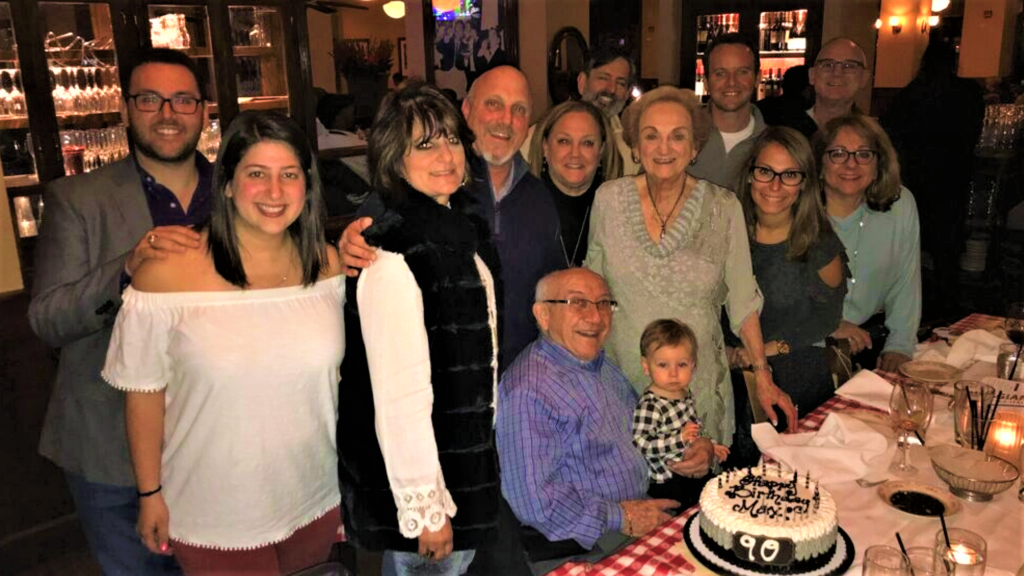 “My name is Moniek Glauben. Glauben means ‘believe’ and that is what I held on to for so many years,” said Max Glauben, who celebrated his 90th birthday last month. His age only a number, Glauben celebrated in a most millennial manner, hosting a “Max’s Birthday Fundraiser” social media campaign to support his Max Glauben Holocaust Educational Foundation.
At press time, $1,146 had been raised in only a couple of weeks. “I want people to believe in something, hopefully in themselves,” he said, “because then you have something to hold on to.”
Glauben was just 10 when World War II started. At 13, he was sent on a boxcar to Majdanek and then to Budzyn, Mielec, Wieliczka and Flossenburg before being liberated by a Jewish soldier while on a death march to Dachau. Glauben lost most of his family during the war — except for two aunts that he found, in the United States, more than 40 years later.
“I’ll never say no to speaking because I want to honor and respect my family,” said Glauben, who served in the U.S. Army in the Korean War before making Dallas his home. “When we were together in the ghetto, as horrible as it was, we could hold each other. In the camps, there was no one. I speak for my parents, Faiga and Isaac, my brother, Heniek, and the rest of the 6,000,000 Jews and the 5,000,000 non-Jews. They have no voice. Myself and the other survivors are their voices.”
Glauben’s family is extended now to four generations — he and his wife, Frieda, members of Congregation Shearith Israel, who have been married for almost 65 years, are the parents of Barry (Michelle), Phillip (Linda) and Shari (Norm) Becker; the grandparents of Alec (Ellen), Blake, Delaney, Hayley, Madison, Ross (Stacey) and Sarah (Brett); and the great-grandparents of Natalie Golman.
Glauben has logged thousands of miles telling his story. The lifetime board member of the Dallas Holocaust Museum/Center for Education and Tolerance speaks there regularly, and also to organizations, synagogues, churches and schools around the city, state and beyond. On Jan. 26, he spoke at Hutto High School near Austin for International Holocaust Remembrance Day.
The Dallas Holocaust Museum, Dallas Hebrew Free Loan Association, and the March of the Living are among organizations reaping the benefits of Glauben’s foundation through his lecture honorariums and the sale of Plagues of the Soul: The Story of Holocaust Survivor Max Glauben, a documentary. With no employees and no overhead or expenses (other than tax preparation), the foundation receives 100 percent of all donations. Glauben does not want to earn anything from his story.
“Max has dedicated his life to illustrating the horrors of his experiences in a way that inspires inclusivity and tolerance,” said Lisa Siegel, who made a birthday donation. “His foundation is based on these principles which have been the centerpiece of his life and will ensure that his stories continue to be told as only he can tell them — with humanity, compassion, and the sparkle in his eye that draws us in.”
Her family’s donation was a token of their respect and love for Glauben.
“Max has been a gift to our family, sharing the most special of moments in our children’s lives,” Siegel said. “He was there when Rachel and Evan participated in the March of the Living, and he and Evan share a birthday. We’re fortunate to call him our friend.”
Glauben has chaperoned March of the Living Dallas, to Poland and Israel, 12 times since 2005, the first time he returned to Poland in 60 years.
“Standing at Auschwitz — the ovens, ashes and the barracks — they can’t talk. I can, and I must tell my stories and of those no longer able. When we stand near thousands of pounds of human ashes, I’m thankful to be alive and I say Kaddish,” said Glauben, whose experiences include visits to 38 Mila St., his childhood home in the former Warsaw Ghetto. “You can talk about the Holocaust and learn from what’s in museums, but it’s like watching a play without scenery. The March of the Living fills in the scenery.”
“Not only does Max give of himself physically and emotionally but his generous support has allowed several students to experience the trip in this life changing journey,” said Pam Hochster Fine, March of the Living’s Dallas director. “Without his help, and that of others, many students would not have this meaningful and lasting opportunity.”
Glauben has remained close to many of the marchers, and he believes the experience is lasting. “The love for their heritage and the respect they have for their Judaism is strong,” he said. “They’re proof the devil didn’t accomplish what he planned. I hope those I help will someday, when they have careers and families, give money and time to share themselves.”
Often asked if he feels hate, Glauben said “Hating eats on a person and doesn’t allow us to function. I came to this country as an orphan and people provided for me, and Hashem and angels and the souls of my departed family guided me. I’ve learned to forgive, but we must never forget.”
To donate to the Max Glauben Holocaust Educational Foundation, visit bit.ly/2BkN6a8 or email moniekg@aol.com.

DHHRM ‘The Sound of Music’ fundraiser is April 13