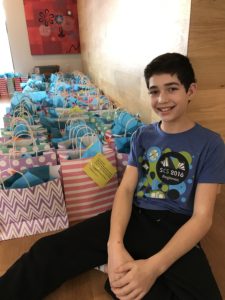 In just over three weeks Kim Hamilton Hunter’s Facebook post to find and say thank you to 13-year-old Ari Blumberg has been counted — and, at press time liked, loved, or otherwise shared by 2,662 people, and with more than 627 comments — his original mitzvah propelled around the globe.
“I’m going to make this post public in hopes that Mr. Ari (Blumberg) age 13 from the Dallas, Texas area will see this post or someone I know can tell him thank you for me. I want him to know that I appreciated the gift bag during my treatment today! What a kind gesture!,” posted Kim, who, for a gift bag she received, created the thank-you note, and a search for her own local hero, now gone viral.
It was when Kim walked into Texas Oncology-Presbyterian Cancer Center Dallas that her heart first swelled due to the kindness of a stranger. Kim, who is battling metastatic breast cancer which spread to her bones before diagnosis five years ago, makes a monthly, four-hour and 250-mile-plus trek from her home in San Angelo for what she calls “liquid gold,” treatments. She presumed her regular seat was occupied by another patient when she saw a bag on her chair.
There were bags on the next seat and the next so she returned to her chair for treatment, receiving the gift from an unknown heart.
That heart belonged to Ari who wanted to contribute to others — like his Saba (Hebrew for grandfather) Mike Degani — who were receiving chemotherapy treatments. Knowing his grandfather’s trials, Ari wanted to do anything possible to let patients know someone was thinking about them. Ari hand-delivered almost 30 of the 120 bags made to patients, while leaving the rest for later appointments. He received a number of personal thank-yous from recipients. 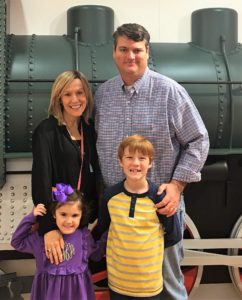 “I wanted to try to take away some of what makes cancer so terrible,” said Ari. He collected both items and monetary donations to put his gifts together, and with the help of friends and family filled the bags with socks, a notepad and pen, lotion, lollipops, granola bars, a bottle of water, tissues and chapstick. “I wanted them to be comfortable, I wanted to take away the bad taste that chemo can leave in the patient’s mouth and the dryness of their skin. Some of it was just because it would be nice to have.”
“Feb. 23 was a particularly hard day as I didn’t know if my treatments were working. I had been in remission, with ‘no evidence of disease,’ and then I was in terrible pain in my hip. That day I didn’t know where I was with the disease and I was scared,” said Kim. The wife of Matt and mother of 8-year-old Hodge and 5-year-old Holt Allie, she was diagnosed with the disease while nursing her then-10-month old daughter. “I’d had an MRI, and then went to my chair and these bright, beautiful, smiles of bags were everywhere. In my mind, I wasn’t creating a ‘viral moment.’ I was thinking I’d want my kids to do something wonderful like this, and I’d love to say ‘thank you.’”
It took less than 24 hours — and shares and comments from throughout the United States, Israel and beyond — for Kim to connect with Ari, a seventh-grade student at Akiba Academy, the son of Sharon and Marc Blumberg, and brother of Sam and Ayla.
In her Facebook response to Kim’s plea, Sharon explained how she and Ari had delivered the bags the day before while her father was having treatment, also including in her post a photo of Ari and his grandfather.
“Ari is incredibly humble. We’re shocked by the attention because this is just the right thing to do. Ari has learned Jewish, really human, values from school, his synagogue, and his family and he is always about doing the next good thing, taking the energy and building on it, and wanting to help people,” said Sharon, who had many friends from around the globe “sharing” the post to her Facebook page. “Ari’s school is on board about creating a project for the students to help patients at a children’s hospital and there are comments by others who are creating their own projects. Ari’s goodness is the impetus for others to do more on a bigger scale. Any time you can inspire someone to do good, that’s great and if you are doing that at 13, as his parents, we couldn’t ask for more.”
Ari, amazed by the Internet attention brought to his mitzvah project, says he was “just doing what we’re supposed to; it’s now my responsibility as a Jewish adult to live a life of giving to others and perform mitzvot.” Maybe so, but this new teen is taking to heart, and following the lessons of his parents — whose footwear and apparel company Chooze provides training, support, education, and loans to women to start their own businesses — and his brother, whose Paint 4 Peace turned Valley View Mall into a canvas raising money supporting families of victims of terror attacks in Israel. “It’s just what I’ve learned and what I know, but it’s nice to know that it was appreciated and I’m glad other people want to do something good too.” 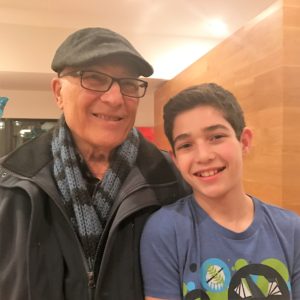 Rabbi Ariel Rackovsky was honored that it was he bestowing blessings over Ari’s bar mitzvah, proud of the young man who spent a year studying to read all of the Torah readings during his service, and proud of the young man who clearly understands the concept of the responsibilities now set before him.
“A mitzvah isn’t a good deed, as it is often defined, but rather a commandment. We are commanded to perform acts of kindness and to sanctify God’s name,” said Rabbi Rackovsky. “Ari’s actions, without his knowing what would come forth, have given so many great feelings. In this time where anti-Semitism is so pronounced, what has happened through his efforts, and literally the sharing of his goodness, is a Kiddush Hashem. He most definitely has sanctified God’s name, and that that is why we are here.”
It may be Ari’s original thought that counts, but it is through his new friend Kim’s push that others know his goodness, and her affinity for him and the Jewish people as a whole keeps getting the counts over and over again. With all the likes and shares, Ari’s story was also shared by JewInTheCity.com and HumansOfJudaism.com.
“I’m not Jewish but I learn Bible and the Old Testament with a friend and I spoke with our pastor’s wife for direction. I’d recently spoken with someone who was raised Jewish who had been talking about how to support Israel and stand with the Jewish community,” Kim said.
That “strength and healing” will soon be something Ari can give through a hug and his in-person charming and genuine smile. 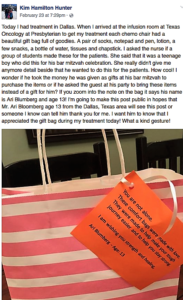