The Guys Night Out Book of the Month Club is celebrating its 15th anniversary this summer.
This summer’s programs will be on July 18, featuring Louis D. Brandeis: American Prophet, and Aug. 15 (The Presidents Club: Inside the World’s Most Exclusive Fraternity). Both begin at 7 p.m. at the Aaron Family JCC, 7900 Northaven Road.
“We Jews are the people of the book and so it only makes sense that we be that — readers of books and people who discuss and learn from them and from each other,” said Bob Weinfeld, on why having a book club matters to him. It’s amazing that although Weinfeld never seems to sit long enough to read a sentence, let alone a novel, the Guys Night Out is truly one of his passions and something he always looks forward to.

While Weinfeld and his wife Jean were on vacation in Colorado, with Dallas friends Fred, of blessed memory, and Marlene Fisher, the wives were talking about a book club. Bob heard the idea and gave it a go. He recruited Fred, Jerry Levin and Ken Parker, and the foursome founded the group.
“The J is the central address for programs like this and it’s what we’re all about,” said Artie Allen, the J’s chief executive officer. “Bob is a living legend, the epitome of the fountain of youth, and (members of) this group — like him — are all a tribute to living life better than well. Reading certainly helps with the wellness of the mind. We wish the group many more anniversaries and we look forward to hosting the current and new members for many years.”
When the group first cracked a binding, it was Laura Hillenbrand’s Seabiscuit, and together they’ve read and reviewed 170 books, most of which are under 350 pages, and about 80 percent of which are nonfiction. This summer’s titles will be reviewed by book club members: in July, by Dr. Baer Ackerman, and at the August anniversary celebration, by Bob Behrendt.
Jeffrey Rosen’s Louis D. Brandeis: American Prophet was published last summer to commemorate the hundredth anniversary of the justice’s confirmation to the Supreme Court. The book explores Brandeis’ views and actions on the Constitution, corporate and federal power, technology, privacy, free speech, Zionism, and more. The Presidents Club: Inside the World’s Most Exclusive Fraternity, by Nancy Gibbs and Michael Duffy, shares the history of the private relationships among the last 13 presidents — the partnerships, private deals, rescue missions, and rivalries of those select men who served as commander-in-chief. 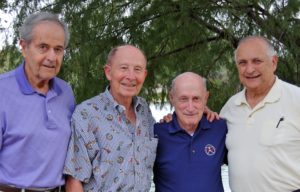 The group, which began with eight men and which has grown to many times that, has more than 20 regulars who have participated almost since the beginning, and others who’ve joined over the years.
Despite its Guys Night Out title, the club is an open book, with women invited to attend many of the programs. While the Sept. 19 title is still to be announced, the rest of the 2017 calendar includes events on Oct. 17, with a discussion about Michael Bar-Zohar’s Mossad: The Greatest Missions of Israeli Secret Service; on Nov. 21, Homo-Deus: A Brief History of Tomorrow by Yuval Noah Harari; and the Dec. 19 meeting, featuring Larry Pivnick’s The Kilgore Curse and Supreme Corruption.
“The books are of great genre variety. Everyone has their own opinion and while one person might love it, the guy next to him might have given it a pass — but what’s always consistent is that we enjoy each other’s company and comments on the books,” said Weinfeld, who also founded the book club at The Legacy at Willow Bend as well as that facility’s library, now with thousands of rotating books. “Sometimes you learn something, or will change your mind about a book, just from listening to the rest of the gang. It’s a great group that comes together and we hope more want to join us — after all, the success of the Guys Night Out is an ‘open book.’ ”
Guys Night Out events are open to the public and free of charge, with each review and discussion preceded by a meet and greet with refreshments. For more information, email Bob Weinfeld at robert.weinfeld@tx.rr.com.

Jewish-aided Habitat for Humanity project back on schedule