StandWithUs (SWU) ninth “Israeli Soldiers Tour” brought Israel Defense Forces (IDF) reservists Kayla and Itamar to Dallas on Oct. 27 through 29, where they shared their experiences with hundreds of students and community members.
They spoke at Yavneh Academy, BBYO, UT Dallas, Congregation Beth Torah and Temple Emanu-El. StandWithUs Texas board members Ken Glaser and Anita Weinstein and the Southwest Jewish Congress, along with Temple Shalom Brotherhood and Temple Shalom’s Israel Connection Council, sponsored a talk at Temple Shalom, attended by board members Janine and Charles Pulman.
Noga Even and Eli Minsky, the StandWithUs high school interns, brought them to Yavneh Academy. Eli’s grandfather Frank Risch is a board member and his brother Aaron was the SWU high school intern in 2014-15. They were accompanied by Jesse Stock, SWU Texas associate director.
Six teams of two traverse the U.S. as part of SWU’s “Israeli Soldiers Tour” (IST). These reservists relate their personal experiences upholding the strict IDF moral code while fighting an enemy that hides behind its civilians. Their stories have never been heard before.

They also discuss their backgrounds and life in Israel, and answer questions. Kayla and Itamar put a “human face” on the IDF uniform. Last names are withheld for security reasons.
IST was initiated by reservists who were incensed at the lies promulgated about the IDF and wanted to set the record straight. Kayla and Itamar concur that they are grateful to have the opportunity to share their stories and expressed how important the love and support they receive is for their morale.
Kayla 22, lived in the United States until the end of high school. She participated in multiple Jewish youth organizations, which allowed her to visit Israel for the first time when she was 15.
After graduation, Kayla volunteered with the IDF as a lone soldier. She served in a coed combat unit that specializes in search and rescue. She was stationed in the Gaza Envelope and throughout the West Bank. She served in 2014, during Israel’s war against Hamas’ terror tunnels in Gaza. She shudders at having only four seconds to take cover from the barrage of Hamas rockets, never knowing when-if a terrorist will emerge from under them and the stress of living for weeks in bomb shelters, feeling helpless.
Kayla now studies government and counterterrorism at IDC in Herzliya, Israel.
Itamar 25, is from Pardess Hana-Karkur, in Northern Israel. He now lives at Kibbutz Magal and studies education and political science at Oranim College.
Itamar served in the intelligence forces of the IDF in a classified unit dealing with the complicated encounters between soldiers and Palestinian civilians.
He survived two attacks. When he was 10 years old, a car bomb made by Islamic jihadists from the West Bank was detonated near a bus near his home. It murdered 14 and injured 50, including children. The second was on a date at a restaurant in Caesarea. Two rocket attacks forced them to duck for cover, helpless under the threat.
Despite dealing with an enemy that does not care about putting its civilians in harm’s way, Itamar and Kayla long for a better future. The car bomb inspired Itamar’s community to build a school for both Arab and Jewish students. Kayla explains that even during the Operation, Israel continued transporting supplies to Gaza residents and took care of the wounded.
In Israel, Jews and Arabs live in the same cities and regions. Both reservists educate that in a democracy such as Israel, different cultures can be preserved and encouraged to thrive. Both hope that they will be met with a partner on the other side that will prepare its people for peace and not terrorism so that the conflict can finally end.

Noga Even and Eli Minsky from Yavneh Academy and Alexandria Lewis from Bishop Lynch High School are the 2017-18 StandWithUs (SWU) high school interns.
Created in 2012, this is the only yearlong program of its kind in North America. One goal is to prepare students for challenges they may face regarding anti-Israel movements in college and in their communities. During the academic year, interns create Israel clubs in their schools, bring speakers, write op-eds, plan programs, and educate their peers and the community about Israel.
They attend training conferences in August and January, and by the end of the school year are equipped with the tools and education necessary to stand up for Israel when they take their first steps onto campus. 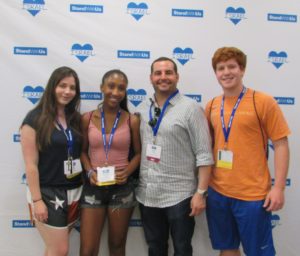 Eliav Terk is the SWU Emerson Fellow from UT Austin. Founded in 2001, the Fellowship selects and trains student leaders from universities across North America to educate their peers about Israel and combat anti-Israel rhetoric.
Tatiana Uklist, who was the 2015-16 StandWithUs (SWU) Emerson Fellow from University of Houston, is now SWU Texas high school liaison. Jen Weintraub, who was an Emerson Fellow at Manhattanville College, then SWU campus liaison in NY, was promoted to Southeast campus coordinator.
Noga and Eli participated in the drive to help Houston victims of the hurricane. They also brought SWU’s “Israeli Soldiers Tour” to their school. Kayla and Itamar addressed the entire school assembly. Alexandria interviewed with Christian news site OneNewNow on the necessity of educating about Israel, especially at her school, where students have spread misinformation about the Jewish state. Eliav also brought the reservists to UT Hillel and to AEPi.