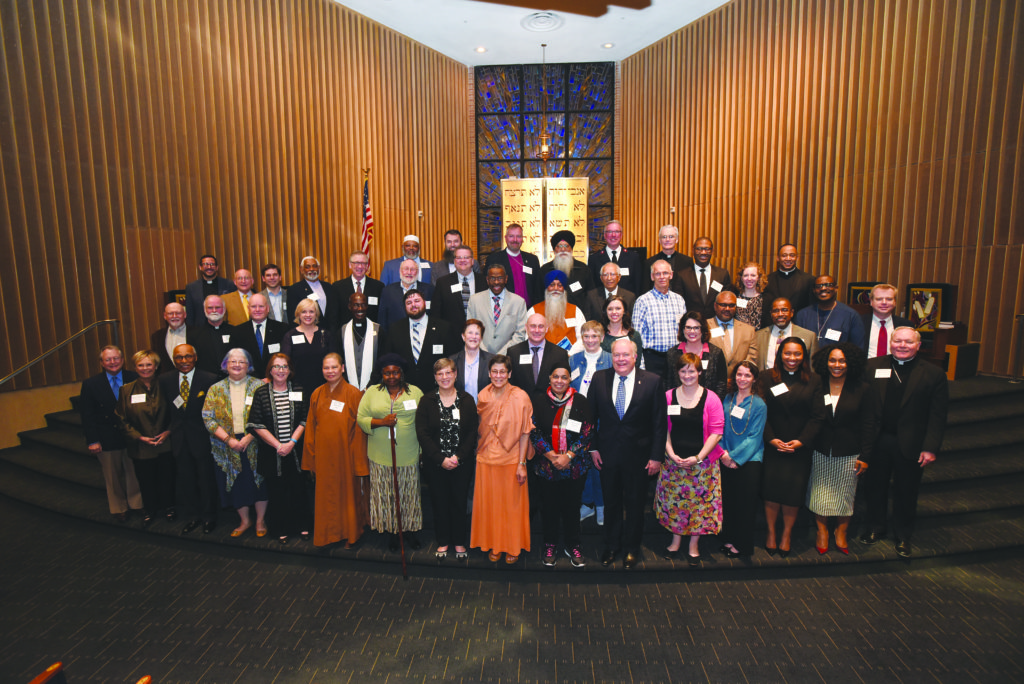 What do a Jewish rabbi, Catholic priest, Protestant minister, Muslim imam and Hindu priest have in common?
They were all active participants during the Jewish Federation of Greater Dallas Jewish Community Relations Council Interfaith Seder on Thursday, March 22. Dallas County District Attorney Faith Johnson, Dallas City Manager T.C. Broadnax and DFW Salvation Army Commander Jonathan Rich were among the local officials who read passages from the Haggadah.
More than 500 people gathered at Congregation Shearith Israel for the sixth annual program. This year’s theme honored the legacy of Dr. Martin Luther King Jr., who was assassinated 50 years ago April 4.
The Seder was led by Rabbi Elana Zelony of Congregation Beth Torah and Most Rev. Edward J. Burns, Bishop of the Catholic Diocese of Dallas. Using a Haggadah created specifically for the evening, attendees were treated to the key symbols of the Seder (The Four Cups of Wine; Four Questions; Blessings over the Karpas, Matzo and Maror; the story of the Exodus; The Four Children; The Ten Plagues; singing of Dayenu, the Hillel Sandwich; and, of course, a sumptuous, kosher festive meal).
Throughout the Haggadah, there were passages relating to topics important to Dr. King and consistent with the JCRC’s mission of community outreach, legislative relations, social action and Israel initiatives. For example, during the Four Questions, the following question was read in unison by the gathering: “How does our faith encourage us to address our society’s struggle with discrimination and injustice?”
Concord Church Senior Pastor Bryan Carter answered, reading from the Interfaith Seder Haggadah, “The late Rev. Dr. Martin Luther King offered this sentiment: ‘The ultimate measure of a man is not where he stands in moments of comfort and convenience, but where he stands in times of challenge and controversy.’ As we consider how the criminal justice system disproportionately impacts people of color, we ought to be reminded that we are called to work together despite our racial, cultural or religious backgrounds.
“We must be true neighbors to one another. When we recognize people fighting against injustice, we are to stand with them, especially in times of distress, even though it is not the most popular action. When we witness others being battered and bruised by the system or battered and bruised altogether, we must be there to lift our neighbors out of the brokenness into a place of hope. If this is replicated all around us, together as people of faith, we can bring transformation to a system that is long overdue and leave our children and grandchildren with a better world.”
Following dinner, JCPenney Chairman and CEO Marvin Ellison spoke about what Dr. King meant to him and his family growing up in the small, segregated town of Brownsville, Tennessee.
“As a young black man growing up poor in the South, Dr. King had a significant impact on my family,” Ellison said. “When we didn’t have future aspects that looked bright, the words of Dr. King gave us hope and inspiration. I’m standing here tonight as chairman and CEO of a Fortune 500 company in large part because of the sacrifices of Dr. King and so many others.”
Ellison spoke about his unconventional journey to the top of corporate America and the example of hard work and faith modeled by his parents. His father worked three jobs, too proud to accept government assistance; his mother was a hotel housekeeper. As he closed his remarks, Ellison commented on what impressed him most about the evening.
“This is truly a wonderful event, and I’ve never been anywhere and seen the diversity of faith and religion represented in one room as openly and passionately as I have tonight.”
Melanie Rubin is board chair of the JCRC. Cyd Friedman and Byron Sanders were co-chairs of the Interfaith Seder, which was presented by the Texas Jewish Post.

An update from JCRC

On other side of interview, writer talks family, life

Shalit’s release appears on the horizon