Choosing films a labor or love

Audiences at the 10 films to be shown during the Aaron Family JCC’s 16th annual Jewish Film Festival Sept. 6-29 will see the culmination of a long year of work that resulted in 90 percent of the movies considered falling to the cutting room floor.

The 10 Jewish movies from around the world, with various themes pertaining to Judaism and Jewish life, are intended to be unique, thought provoking and entertaining. So co-chairs Brenda and Peter Marcus spent an entire year watching all of the movies sent to the J from filmmakers and distributors. They know immediately if the film is good or not.
“We watch every movie to the end and we can tell from the beginning if we don’t like it; a good one always stands out,” Brenda said. “There are often times we don’t like a film, but we are aware that others might, so we never discard it. Our main goal in choosing the movies is to entertain people and allow them to have a wonderful time at the festival.”
The Marcuses viewed 105 films this year, up from the 70 they saw last year. They narrowed it down to 25 to show their committee of 12 community members, who then vote for their favorites to choose the 10 that are shown. The committee is made up of Judy Borejdo, Catherine and Paul Lake, Barbara Lane, Ann and Steven Meyer, Haiya Haftali, Ted Rubin, Sydelle Schectman, Sol Stein and Carole and Joram Wolanow. They get the rights for each film from the distributors of filmmakers and are allowed to show it one time.
In choosing the films, the Marcuses said they have specific criteria. The movie has to engage the audience from beginning to end; needs to be thought provoking and stimulate discussion; shed light on little known aspects of Jewish life or history; and express the rich diversity of the ideas and values Jews bring society and the impact that makes in the world.
The Marcuses believe this year’s 10 films adequately represent those themes.
“The first thing we notice when watching a film is if people will be gripped by it. There is something we can sense right away when we know a film is great,” Peter said. “It also needs to have some kind of Jewish relevance that will be interesting to people. We learn so much seeing all of these films and hope we can educate the community as well.”
Some interesting trends stood out in the films they watched this year, the Marcuses said. First, there was a shortage of comedies, only four, and none of them met their criteria. The number of movies dealing with the Holocaust increased (they received 60 to watch) and for the first time, foreign movies depicting the relationship between Jews and Arabs came into play, two of which made it into the festival.
These trends, they said, reflect the concerns of filmmakers today, and the co-chairs believe it was important for the community to be exposed to these films so they can become more educated.
“A lot of our films this year are French and German because they have very high standards and the movies are inspirational,” Brenda said. “We want to give people a glimpse of the Jewish experience around the world, and I believe we accomplished that this year. We also want people to talk about the films when they leave the theater and be impacted by them. It’s wonderful that we can do this for the community.”
The Marcuses said the most rewarding part of this event is when the movie finally hits the theater and they see firsthand how the films they chose affect people. Watching all of the movies is time-consuming, but it is something they enjoy.
“This is truly something special,” Peter said. “When we get to the actual festival and when the films begins, it’s a unique experience. Although we have seen the movie before, there is something special about being in the audience, feeling those vibes and seeing it on the big screen. It’s a great moment.”
Judy Cohn, the J’s director of cultural programs, added that though many Jewish film festivals take place across the country each year, Dallas’ is unique because only 10 films are shown and people aren’t bogged down with films that aren’t interesting.
“We have an extraordinary group of films this year and the committee worked really hard,” she said. “What I love about our festival is that we vary the content and don’t saturate people with movies that aren’t up to our standards. We’d rather have a small festival featuring the best of the best, and I believe that’s what makes this event successful each year.”
The film festival is supported by the Kenneth and Sherry Goldberg Philanthropic Fund of the Dallas Jewish Community Foundation, the Dallas Office of Cultural Affairs and the JCC. Opening night, Sept. 6, is $15, all other days are $10. A season pass can be purchased for $95. Tickets may be purchased at the JCC or at www.jccdallas.org. They are also available at the theater one hour before showtime.
For information, contact Cohn at 214-239-7115 or jcohn@jccdallas.org.

The films of the festival 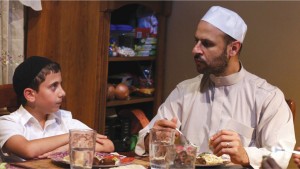 THURS., SEPT. 6, 7 p.m.
“David”
Studio Movie Grill,
11170 N. Central Expy., Dallas
Daud, an 11-year-old, Muslim boy, and Yaov, a yeshiva student, live different lives. However, their paths cross in Brooklyn when Daud attends yeshiva, where he is accepted without question as one of their students. Daud and Yaov form a strong friendship and Daud conceals his true identity from his friend.
“This film looks at Jewish-Arab relations through the eyes of children,” Brenda Marcus said. “They each learn about another religion that they’ve never known before.”
A dessert reception will follow the film. Co-sponsors are the Dallas Holocaust Museum/Center for Education and Tolerance, the Consulate General of Israel to the Southwest and Congregation Anshai Torah. 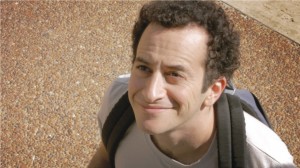 SUN., SEPT. 9, 7 p.m.
“A Wonderful Day”
(Part of double feature)
Aaron Family JCC,
7900 Northaven Road, Dallas
“A Wonderful Day,” a romantic dramedy in German and Hebrew with English subtitles, follows Shachar, a young, aspiring Israeli scientist. He receives a scholarship to study in Berlin and plans to propose to his girlfriend, who he hopes will follow him to Germany. His grandmother, a Holocaust survivor, opposes his decision to go to Germany and does everything she can to make him stay in Israel.
“The Holocaust is part of this story, but it’s not what the entire film is about,” Brenda Marcus said.
Co-sponsor: Congregation Nishmat Am. 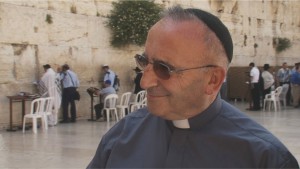 SUN., SEPT. 9, 7 p.m.
“Torn”
(Part of double feature)
Aaron Family JCC,
7900 Northaven Road, Dallas
The documentary “Torn” is about Romuld Waszkinel, a Polish Catholic priest who discovers he was born to Jewish parents and that his name is Jacob Weksler. The film follows his personal journey from conducting mass in a church in Poland, to his life as an observant Jew on a religious kibbutz in Israel.
“This film is all bout the struggle he has with his double identity,” Peter Marcus said. “It shows how people can deal with issues within themselves.”
Co-sponsor: Congregation Nishmat Am. 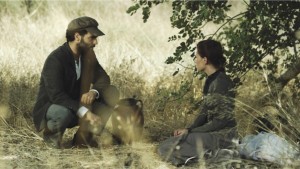 TUES., SEPT. 11, 7 p.m.
“Gei Oni (Valley of Fortitude)”
Studio Movie Grill,
11170 N. Central Expy., Dallas
Toward the end of the 19th century, Fania and her baby daughter arrive in Ottoman-controlled Palestine, survivors of the Russian pogrom. Soon, Fania meets Yechiel, a widowed farmer from a remote village in the North. She reluctantly agrees to marry Yechiel, but is concealing a terrible secret from her past.
“This movie highlights the values of perseverance, of never letting the Holocaust get you down and the redemption of love,” Brenda Marcus said. “It shows the unbelievable fortitude the Jewish people have and how they can overcome anything in life.” 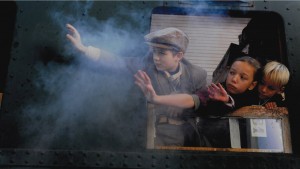 THURS., SEPT. 13, 7 p.m.
“Nicky’s Family”
Studio Movie Grill,
11170 N. Central Expy., Dallas
Shortly before World War II, British stockbroker Nicholas Winton, masterminded the rescue of 669 Czech and Slovak children to Great Britain. This documentary features newsreels, photos and reenactments narrated by those that were rescued by Winton.
“Tikkun Olam is the main theme in this film, and the amazing thing about it is that is was performed by a non-Jew,” Brenda Marcus said. “He saw that children were going to die and he did what he though was right.”
Co-sponsors: Akiba Academy, Congregation Beth Torah and Jackie and Steve Waldman. 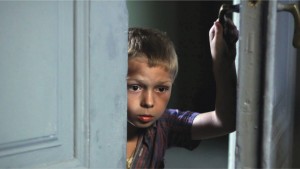 SAT., SEPT. 15, 9 p.m.
“My Australia”
Angelika Film Center,
7205 Bishop Road, Plano
Halina is a Holocaust survivor living in anti-Semitic Poland in the 1960s. In order to protect her family, she lives as a devout Catholic, but when she realizes her two sons join a Neo-Nazi gang, she leaves Poland and takes them on an adventure. The boys think they are going to Australia, but their destination is actually Israel and the boys find out they are Jewish.
“This film is about culture conflict and deals with both the humor and sadness within that area,” Brenda Marcus said. “It also shows how good people can be prejudiced and highlights how people can come to terms with being Jewish. It is seen from the eyes of children as well.”
Co-sponsor: Temple Shalom. 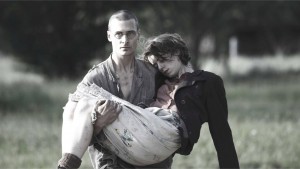 THURS., SEPT. 20, 7 p.m.
“Remembrance”
Studio Movie Grill,
11170 N. Central Expy., Dallas
This film is a love story that begins in a concentration camp in Poland. Tomasz, a Polish resistance fighter, escapes and takes his Jewish lover, Hannah, with him. They become separated in the war and they believe each other is dead, until Hannah, who is happily married, finds Tomasz 30 years later.
“This is about the complications of the Holocaust,” Peter Marcus said. “This is a movie we weren’t sure about showing at first, but our committee loved it and I hope the community will too.”
Co-sponsor: Bnai Zion. 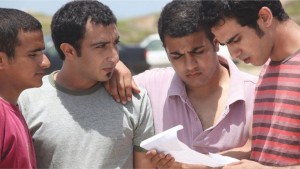 SAT., SEPT. 22, 9 p.m.
“A Bottle in the Gaza Sea”
Angelika Film Center,
7205 Bishop Road, Plano
This French drama follows Tal, a teenager who recently settled in Israel with her family. She writes a letter questioning the endless hatred between the Israelis and Palestinians, which she puts in a bottle in the Gaza Sea. A heated Internet conversation then begins between Tal and a mysterious man, a young Palestinian who finds the bottle.
“This is about Jewish-Arab relations and how children in the region go about their lives, even with all of the politics that take place,” Brenda Marcus said. 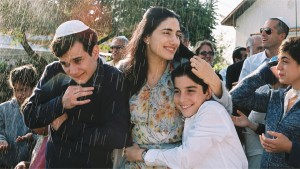 SUN., SEPT. 23, 7 p.m.
“Mabul”
Aaron Family JCC,
7900 Northaven Road, Dallas
Yoni is an underdeveloped child who is bullied at school, and his parents are estranged. To complicate matters, his 17-year-old autistic brother, Tomer, expectantly returns home and the family is forced to face the painful truth about themselves.
“This is about the interaction between a boy who is studying for his bar mitzvah and his brother,” Peter Marcus said. “Ultimately, their relationship brings the family together. It’s a touching movie.”
Co-sponsors: Café Israel/Jewish Federation of Greater Dallas. 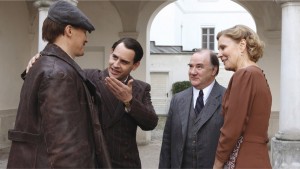 SAT., SEPT. 29, 9 p.m.
“My Best Enemy”
Angelika Film Center,
7205 Bishop Road, Plano
This thriller is about Viktor Kaufman, the son of a wealthy art dealer in Berlin. His best friend, Rudi, joins the Nazi Party, betraying Viktor and his family. However, a priceless piece of artwork can either rescue the family or secure Rudi’s position in the party.
“This is a thriller that touches on the Holocaust and is about Jewish history,” Peter Marcus said. “This is pure fiction and a great way to end the festival.”
Co-sponsor: Congregation Adat Chaverim.

Purim a time to dress up and let go