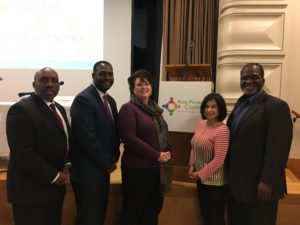 The Dallas Jewish community played key roles during the Anti-Poverty Coalition of Greater Dallas’ town hall forum Jan. 11.
Dallas’ Jewish Community Relations Council (JCRC) is a founding and steering committee member of the Anti-Poverty Coalition (APC), and JCRC Executive Director Anita Zusman Eddy moderated the panel discussion. The Jewish Federation of Greater Dallas, National Council of Jewish Women and the Bnai Zion Foundation also participated. The JCRC and Federation co-presented the forum.
Dallas City Manager T.C. Broadnax set the tone for the forum by stating its purpose.
“We cannot ignore that some in our community are not doing as well as they should be,” Broadnax said at the forum, which attracted more than 200 community members, leaders and activists. Broadnax explained how his office adjusted the city’s priorities and budget to better support efforts to improve human capital.
JCRC Chair Melanie Rubin noted the council’s objective with the initiative.
“Realizing the principle of tikkun olam, the JCRC is committed to supporting efforts to alleviate poverty in Dallas,” Rubin said. “Not only is it valuable to help make the greater Dallas community a better place for all, we recognize that in order for our Jewish community to continue to thrive, everyone in the greater Dallas area must be provided with opportunities to thrive as well.”
Other members of the APC steering committee are the Catholic Diocese of Dallas, Catholic Charities of Dallas, CitySquare, National Council of Jewish Women, Texas Hunger Initiative, and United Way of Metropolitan Dallas.
The APC’s mission is to build community support for policies and initiatives that improve the financial health of Dallas-area families.
“Financial stability, workforce development and equity are more than just buzzwords,” Zusman Eddy said. “For many, they represent lifelines to a better existence for themselves and their families.”
The APC is most well-known for coordinating and leading efforts in North Texas to fight predatory lending practices. When meaningful legislation died during the 82nd Texas Legislature (2011), the APC gathered the community together to call on the Dallas City Council to act, and in June 2011, the City of Dallas was the first city in the nation to adopt a regulatory ordinance on payday and auto-title lending. Additionally, the JCRC led the APC’s efforts in 2015 to successfully lobby the City of Dallas to release $200,000 to expand marketing of Volunteer Income Tax Assistance (VITA) programs and the availability of tax credits, including the Earned Income Tax Credit (EITC).
At the Jan. 11 forum, Sara Albert of the National Council of Jewish Women welcomed guests and acknowledged VIPs, such as Dallas City Council Member Casey Thomas, II, who introduced Dallas City Manager Broadnax. Following remarks by Broadnax, a panel discussion was held to reflect on and discuss specific areas within the many critical components in the fight against poverty. Wende Burton, Community Philanthropy director for Communities Foundation of Texas, spoke about economic stability and security; Reverend Gerald Britt, vice president of External Affairs of CitySquare, discussed the vital role education plays in workforce development; and Florencia Velasco Fortner, president and CEO of The Concilio, shared her expertise on the meaning of equity.
After each panelist spoke briefly on their area of expertise, Zusman Eddy offered questions to the panel suggested from the audience. The community dialogue between community leaders, stakeholders, and city leadership reflected the progress and challenges that face the greater Dallas community.
A common goal expressed by the nonprofit and city leadership working to banish poverty in Dallas is to work together to assure the best chance for all Dallas residents to have access to the economic opportunities that many people take for granted but that can be out of reach for some in our community. At the APC forum, Broadnax invited community leaders and members to join the city as partners in their efforts to alleviate poverty, noting that the city aims to implement programs based on four core values: “empathy, ethics, integrity and equity.” To learn more about the work of the JCRC and the APC, contact the JCRC at jcrcdallas@jewishdallas.org.
As the public affairs and external relations division of the Jewish Federation of Greater Dallas, the JCRC is dedicated to supporting Israel, through education and advocacy. In coalition with others, the JCRC organizes the pro-Israel movement throughout Greater Dallas to provide visible and strong support during times of both peace and conflict, and is instrumental in convening a wide range of Jewish and non-Jewish advocates to both learn about and demonstrate their support for the Jewish homeland.