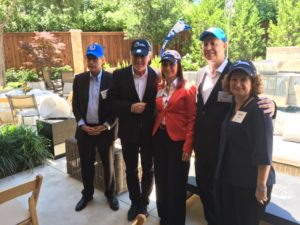 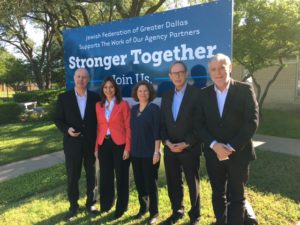 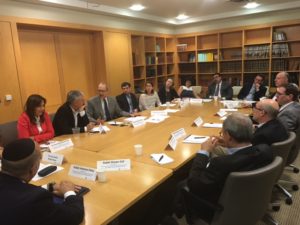 On May 3-4, the Jewish Federation of Greater Dallas and its Jewish Community Relations Council (JCRC) hosted five visiting Members of Knesset for a tour of the Dallas Jewish community.
The Members of Knesset were in Dallas as part of a mission to learn about the realities of Jewish life in America. The tour was led by the Jewish Federations of North America (JFNA) and the Jewish Agency for Israel (JAFI), and also included visits to Cleveland and Miami.
“We are honored that JFNA and JAFI brought the visiting Members of Knesset to Dallas, one of only three stops in the U.S., to meet with our board and community members,” said Dan Prescott, Federation board chair. “Our community is strong, diverse and committed to improving Jewish lives in both Dallas and Israel. We are excited to have the opportunity to show our special guests what makes Jewish Dallas so special. We were thrilled to hear the wonderful feedback they gave to us about our community and how well we work together,” he added.
The Knesset delegation included Meir Cohen (representing Yesh Atid), Tzachi Hanegbi (Likud), Michal Rozin (Meretz), Dr. Nachman Shai (Zionist Union), and Revital Swid (Zionist Union), comprising a high-level and diverse group of leadership from across the Israeli political, social and cultural spectrum. The delegation was joined by Rebecca Caspi, senior vice president of the Jewish Federations of North America (JFNA), and Josh Schwarcz, secretary-general of the Jewish Agency for Israel (JAFI).
The delegation arrived in Dallas on the evening of Tuesday, May 3, and was welcomed by the Jewish Federation of Greater Dallas board of directors with a kosher Texas barbecue dinner.
As part of the program, the Knesset members had an opportunity to share what they were hoping to learn during their time in the United States. The following morning, the delegation met with a group of local Dallas-area rabbis from Reform, Conservative and Orthodox congregations to discuss a variety of topics affecting the American Jewish community, including the diversity of American Jewish religious expression and perceptions of Israel among American Jewish youth. Several of the Knesset members noted and that the program was the first occasion in which they witnessed rabbis from different streams gather together for dialogue and discussion.
They also remarked on the extraordinary and increasingly unique relationship between Israel and the American Jewish community.
“Jewish identity in Israel is far different from Jewish identity in the United States, and I was happy that our rabbinic community had the opportunity to share with the visiting MKs what it means to be Jewish in Dallas,” said Rabbi Stefan Weinberg. “The fact that so many rabbis came to meet and dialogue with the visiting Knesset members is a testament to our community’s love for and commitment to Israel,” he added.
Further programming included a tour of the Aaron Family Jewish Community Center, during which the Knesset members were able to see the JCC’s senior and preschool services, and a tour of the Schultz Rosenberg Campus, where the Knesset members were treated to a song and dance performance by Akiba students and discussion and dialogue with Yavneh students. The Knesset members also participated in a luncheon and panel discussion with Federation and Dallas Jewish community leadership at the home of Harold Gernsbacher.
“Although the visiting Knesset members were in Dallas to learn about our community, this was an incredible opportunity for our community to learn about Israel as well,” said Harold Gernsbacher, Federation board member and National Campaign chair of JFNA. “This type of dialogue and relationship-building unites us as a global Jewish community, and makes our pride in Israel and in Jewish peoplehood that much stronger,” he added.
According to JFNA and JAFI, the Knesset members were highly impressed by the stature and intelligence of the Dallas Jewish community. “By all accounts the trip was highly successful, and we hope you will appreciate knowing that the participants were full of praise both for the organizational aspects of this trip and for the deep insights into Jewish life in North America today which it provided,” said Rebecca Caspi and Josh Schwarcz. “One of the MKs commented that ‘A trip like this should be compulsory for every single Member of Knesset.’”
For more information about the Federation and the JCRC’s work supporting Israel, please contact jcrcdallas@jfgd.org.
— Submitted by Jamie Moore on behalf of the JCRC