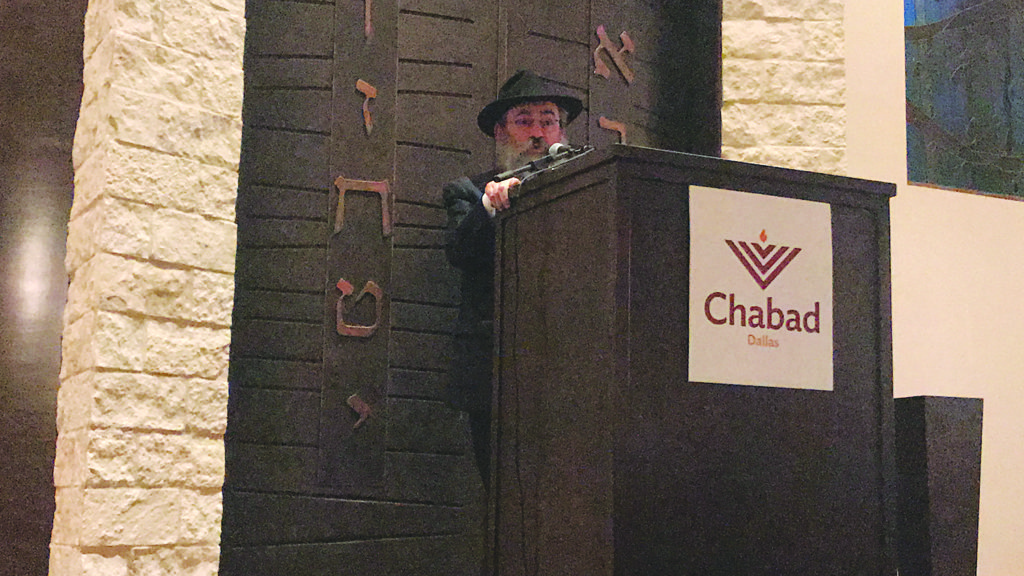 When a gunman entered Chabad of Poway, California, on April 27, the last day of Passover, his expressed mission was to kill as many Jews as possible. His hatred claimed the life of Lori Gilbert-Kaye, who is credited with jumping in front of the synagogue’s rabbi to shield him from the gunman’s bullets. The gunman injured three others: Chabad of Poway Rabbi Yisroel Goldstein; Noya Dahan, 8; and her uncle, Almog Peretz.
Chabad of North Texas held a Community Event in Solidarity with Chabad of Plano, Wednesday, May 1, at Chabad of Dallas.
In addition to honoring the memory of Lori Gilbert-Kaye, the event framed what the Jews can do after this horrific tragedy. The overarching message was that in response to hatred against Jews, there really is only one response: Do Jewish and “Continue to be a Light unto the Nations.”
Rabbi Mendel Dubrawsky, the first Chabad rabbi in Dallas and North Texas, was pained as he discussed what had transpired. He said he wondered if he would have been as quick-thinking and brave as his boyhood friend “Sroel,” the rabbi who while injured shepherded his congregants to safety. In the process Rabbi Goldstein lost a finger on one hand and sustained severe damage to the other hand.
Rabbi Dubrawsky explained that living a Jewish life is based on three pillars: Torah study, prayer and gemilut chassadim, acts of loving kindness.
Ultimately, Dubrawsky said, that all people are created in God’s image, b’tzelem Elohim.
“Living as an example of btzelem elohim, being created in the image of God, means living a holier life, means defining the world around you, means bringing light and brightening up the dark which opposes and is the greatest threat to evil, to stone-cold evil.”
Rivkie Block, rebbetzin of Chabad of Plano, paid tribute to Lori Gilbert-Kaye and the life of tzedakah that she led that seemed effortless and natural to so many.
“We are gathered here, to take part in snatching back the light that evil sought to take, and choose holiness, mitzvot, in particular acts of tzedakah in her memory. Not only for Lori’s soul, but for our nation and indeed the entire world,” Block said.
She outlined several actives one can do “snatch back the light” (see box).
With regard to the community’s security, Mark Kreditor, board chair of the Jewish Federation of Greater Dallas, spoke on behalf of the Federation.
He discussed the critical mission of the Federation to support Jewish education, social services, support for Israel and Jews around the world as well as “the new normal” — keeping the community safe.
“I am here to tell you your Federation has been involved with educating and supporting every community partner through our Community Security Initiative, funded largely though your support of our annual campaign and by select donors. Our goal is to increase the effectiveness of our local security efforts across our community with all the local law enforcement agencies. Through your support we are now part of the national security apparatus of the Jewish Federation movement called Secure Community Network (SCN).”
He concluded by hoping for a return to life as it was before the shootings at Tree of Life in Pittsburgh and Chabad of Poway as well as praying for the speedy recovery of the injured.
“I am here tonight representing your Federation to provide love, support, resources, and most importantly, vigilance as we together as a community pray for a return to our old normal.”
Also participating in the program were Rabbi Peretz Shapiro; Uptown Chabad’s Rabbi Zvi Drizin, who led a brief prayer service; and Linda Johnson, who lit two memorial candles in memory of Lori Gilbert-Kaye as well as the six million Jews who perished in the Holocaust.

The Legacy's Got Talent!