It’s 2017 and the spirit of the pen pal is alive and well in the Me’Ever Le’Yam program that is matching Lone Soldiers with students in the United States, connections who are sending care packages, letters, videos, visits from students and more.

“I’m excited to bring together my passion for Israel and my experiences in nonprofit management to Me’Ever Le’Yam,” said Drew Alyeshmerni Leach, resident and CEO of Me’Ever Le’Yam, which translates to “across the sea.”
Leach started the program out of her own experiences as an IDF Lone Soldier (a serviceman or woman without immediate family in Israel) in 2006. A native of Scottsdale, Arizona, Leach was looking for her future after graduating the University of Arizona. Initially thinking she’d like to be a cantor, it was recommended she first get some life experience. Connecting with the Jewish Agency, Drew made aliyah in the middle of the Second Lebanon War. She served in the public relations branch of the IDF Spokesperson’s Unit and the Foreign Relations department of the Civil Administration.
During her own service, Drew, now married to Jason Leach and a Southern California resident, was “adopted” by the congregation in Minnesota where her uncle served as rabbi. She received care packages and letters of encouragement put together by the young students in the religious school and it was these items — including the friendship bracelets which she wore throughout her service — which provided a tremendous amount of strength and support. 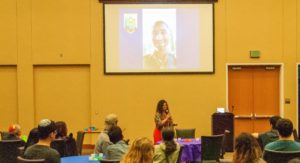 Following her release, Drew remained in Israel for five years, obtaining her master’s degree in public policy from Tel Aviv University and working for the Society for the Protection of Nature in Israel. Since returning to the States, she has worked for the Dallas Jewish Community Relations Council, Southwest Jewish Congress and Temple Shalom, as well as Hillel at the University of California, Irvine and Temple Beth El of San Pedro’s Torah school.
Me’Ever Le’Yam, partnering with Garin Zabar and El Al Cargo, is currently running as a pilot through May 2017 with a national program launch expected for September 2017. Ten organizations, including Dallas’ Hillels of North Texas and Yavneh Academy, will exchange correspondence with a soldier from McAllen this spring. Any religious school, youth group, teen program, synagogue, Hillel, JCC, day school, Moishe House or any other program that engages participants from youth to young professionals is invited to participate.

“There are approximately 1,500 Lone Soldiers in Israel from North America and my goal is to reach every one of them,” Leach said. “Once we do that, we’ll expand to support those from other countries.”
Hillels of North Texas, the pilot program organization, has linked with Lee Mash, a Dallas native serving as an IDF combat soldier in the Nahal Brigade based on the border with Gaza. Mash, a 2008 graduate of J.J. Pearce High School and 2013 from the University of Texas at San Antonio, who played for the university’s hockey team, participated in Hillel programs, and earned a bachelor’s degree in international business, says his passion to protect his homeland started with a very strong connection to the State of Israel following his experiences on a Birthright tour and a six-month internship through Masa Israel.
“The moment I stepped foot in Israel I felt an extremely strong connection, and the more time I spent here, the more I realized that I wanted to serve in the army, the best way I believed I could immerse myself in the Israeli culture. The support system from home is awesome and I’m glad to share this experience with the students as well.”
Contacted by Leach and Hillels of North Texas Executive Director Melissa Duchin, Mash was excited to be chosen as the first soldier to receive support from home.
“I love meeting new people, especially fellow Texans,” said Mash, the son of Dennis and Frankie and brother of Joel and Scott, who grew up at Chabad of Dallas and Chabad of Plano. He attended Akiba Academy. Mash sent a list of his favorites from home and received a pound of beef jerky, the Cards Against Humanity party game, a Texas flag and a UNT Hillel shirt.
“I made a video explaining who I am and what I do in the army and they played it for the entire group of students during a large Shabbat dinner at which my parents and grandparents were honored and they had an amazing time,” Mash said. “They were so proud and happy about the support that the Hillel is giving me and other Lone Soldiers.”
Mash’s mother believes the program brings oneness, a connection, to her son who she says is helping the whole of the People of Israel through his service.
“For us as family to send things and reach out is expected, and I know appreciated, but it’s wonderful that others are thinking about him and showing that support,” she said. “I’m thankful for the program and think it is incredible.”
Mash, who plans to pursue a Global MBA degree at Tel Aviv University or IDC in Herzliya when his initial service is complete, has been sending and receiving notes to and from the students. Over the 2016 winter break, when a group visited Israel on a Birthright Tour, meeting many of the students in person made a lasting impression on them all.
“Me’Ever L’Yam provides a tangible connection between those here in the States and our Lone Soldiers and I believe it cements the relationships with another ‘just like us,’ and maybe not so much, but we all love and support Israel,” said Duchin, honored to lead the pilot program. She was first introduced to Mash by another Dallas native, Michelle Golan, who has also made aliyah. “Engaging our students in the caring for another, who is serving our homeland, is very special.”
For information on joining the Me’Ever L’Yam program, as a host organization or a Lone Soldier in receipt, call 310-767-6496, email info@meeverleyam.org, or visit meeverleyam.org.

In a dramatic step, Israel to require 14-day quarantine for all travelers from abroad