By Hadara Graubart
Nextbook
For any self-respecting cynic, it’s de rigueur to despise Christmas music — primarily for its relentlessness and the forced irony it creates in many, many otherwise joy-free environments (malls, car repair shops, pharmacies). Chanukah music has been saved from this fate by its obscurity, and as a result, the general 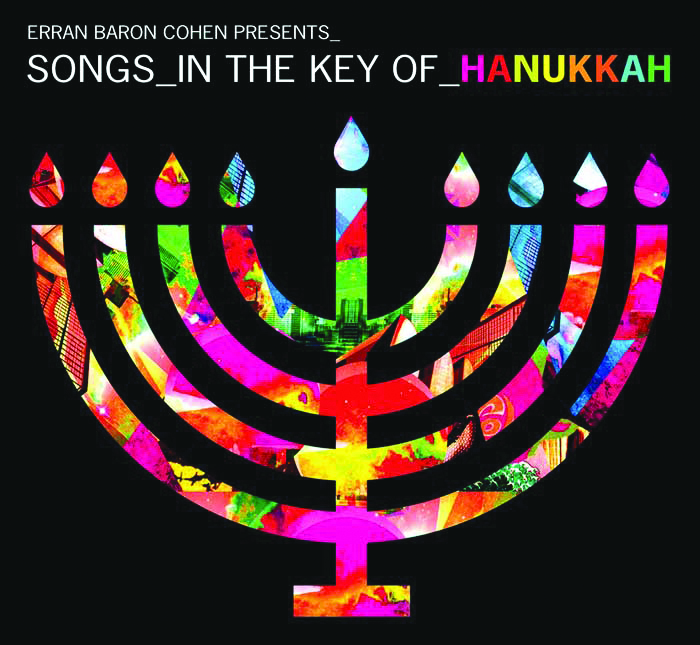 public probably doesn’t realize just how limited and infantile the catalog really is. Then again, why shouldn’t it be? Winter holidays are under no obligation to have larger or more adult musical repertoires than other festivals — and Chanukah is most definitely a children’s holiday. Still, there is certainly no reason why its songs cannot be transformed into more pleasurable fare, or some new ones added to the mix. Along with a cadre of talented collaborators, Erran Baron Cohen (that would be neither Borat, nor the neuroscientist, but a third talented brother), has taken on the task, producing the new album “Songs in the Key of Hanukkah.”
Baron Cohen seems to be banking on the possibility that at the root of some Jews’ distaste for Christmas music is the fact that, by definition, it’s not ours. We may even envy the celebratory mood that the endless seasonal loop of Christmas music seems to engender in some people. But we don’t have a soundtrack to amplify those emotions in ourselves. Chanukah music can never compete when it comes to sheer volume, but if it were done well enough, we might actually listen to it. Don’t we deserve the opportunity to bask in our own nostalgia (not to mention a tiny dash of elitist superiority over impeccable production values and the multi-culti cachet of Sephardic music)?
“Songs in the Key of Hanukkah” starts off with the Jewish answer to “‘Twas the Night Before Christmas,” the play-by-play rundown of the festivities known as “Chanukah Oh Chanukah.” While I never thought I would hear the word “sufgania” in a rap song, I’m not totally surprised — there’s been a bit of a trend toward Jewish novelty rap. But things start to get interesting when, in his klezmer-inflected take on “I Have a Little Dreidel” (the classic ode to DIY toy-making that has confounded generations of children whose dreidels are clearly mass-produced out of plastic), Jules Brookes growls the words “dreidel I shall play” as if he is singing about starting a rumble, not spinning a top. Later in the song, Brookes’ wailing might convince listeners that
“Dreidel” is actually the name of his tragically lost love. This drama provides a welcome makeover for a song about a soul-crushingly un-fun game.

“Spin It Up” is, essentially, an instrumental remix of the same song’s Hebrew version, “Sevivon, Sov, Sov, Sov” (the main lyrics translate to “Chanukah is a good holiday”; they aren’t missed here). The pulsing electronic reggae imbues the ditty with a previously unmined sonic dignity that’s only slightly compromised by the chanting of the title phrase (possibly excusable as an allusion to DJ-ing).
The sultry Ladino tune “Ocho Kandalikas” has the benefit of not being in English, so its lyrics don’t sound as silly as they might otherwise. In this case, it also benefits from the sensational voice of Yasmin Levy. The
New Agey “Relics of Love and Light” includes just enough of Avivit Caspi’s Middle Eastern trilling to exalt it beyond yoga-class background noise. It has that certain quality often found in Israeli music (and actually, in a lot of things Israeli): it sounds a little cheesy, but is somehow still tough and sexy enough to be compelling.
Another original, “Look to the Light,” sounds so much like the 1970s hit “Dancing in the Moonlight” that I kept expecting someone to rhyme “light a candle tonight” with “supernatural delight.” With a folkie groove and painfully earnest lyrics — “We struggle for freedom, and tyranny tries to exert itself/But tyranny weakens, and in the end justice will prevail” — the song attempts to infuse Chanukah with a spirit typical of other modern Jewish festivities: the call to use our own history of oppression to inspire a fight for the greater good of all mankind. This sentiment is generally reserved for Passover, but there’s room for it here. (Ironists beware: In this song, when they say the word “echoes,” voices echo.)
“Rock of Ages” continues in this vein. Although it has a Top 40-ish intro that could suggest R&B or retro hip-hop, it is, in fact, another soaring ballad that wouldn’t sound out of place on a telethon; I could practically see the camera panning to each member of the chorus as they croon “All men free/Tyrants disappearing.” And though there are hints of gospel (especially in the repetition of “sheltering tower”), unexpectedly fresh backbeats keep this from sounding like one of those Christian rock songs that’s ostensibly about God, but sounds suspiciously like it’s about a hot lover.
The final track, “Ma’oz Tzur,” is the Chanukah song that most reminds me of Christmas carols, whether because of its ubiquity or some legitimate melodic symmetry. This rendition is no exception. If listeners have paid attention up to this point, they might already be feeling a bit uncomfortable after the previous track, a rap called “My Hanukkah (Keep the Fire Alive)” — which, via lines like “A nation awakened against assimilation,” “Down with Antiochus, up with all the priestly zealots,” and “How you gonna make a child of God become what he isn’t?” underscores some of the religious fundamentals of a holiday seen by many primarily as an occasion for latkes and candles. But either way, the sentimental finale can’t help but send a message — Joy to the World! — that leaves us carol-haters a bit uneasy.
Hadara Graubart is the music editor at nextbook.org.
Tags: Chanukah, shopping

Kosher food service and other Jewish history of the Titanic