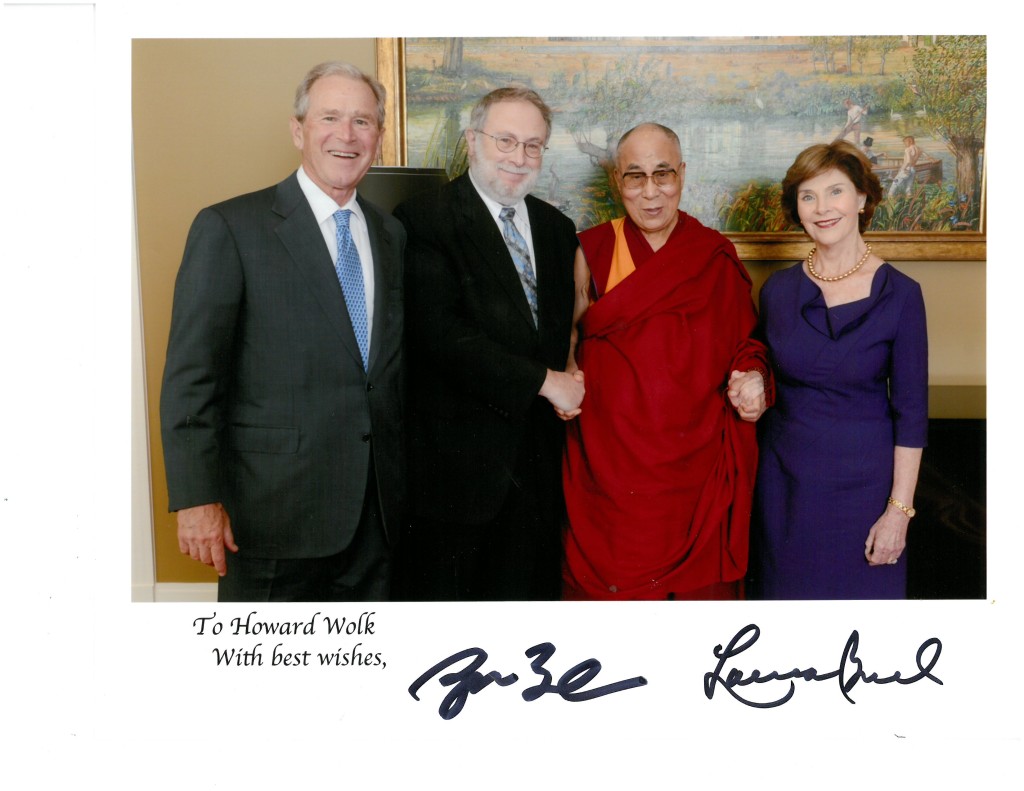 Editor’s note
When JFS Community Chaplain Rabbi Howard Wolk sent me the following, I had to find space for it in this week’s TJP.
Read and enjoy!
— SW-R

My Meeting with President and Mrs. Bush and the Dalai Lama
By Rabbi Howard Wolk

On July 1, I had the privilege and honor of attending a luncheon with President and Mrs. George Bush and the Dalai Lama. The luncheon was at the Bush Library and Museum on the campus of Southern Methodist University (SMU) in Dallas. The president invited the Dalai Lama in celebration of the birthday that the two share, July 6.
Each of the invitees (68 in all) had an opportunity to have a photo taken with the three dignitaries. I introduced myself to the president and Laura.
I thanked him for all he did for our country and for being a good friend to Israel.
I told him that I was in attendance (with about 1,600 others) at the recent Israel Bonds Dinner here in Dallas. President Bush was the guest speaker. He said it was “awesome.” I told him that it was “inspiring.”
Before I could address the Dalai Lama, he greeted me with “Shalom.” I responded with “Shalom.” I told him that I had just returned from the convention of the Rabbinical Council of America, the largest group of Orthodox rabbis in the world (over 1,000 members). I extended wishes of greeting to him on behalf of our entire council.
At the luncheon, I was provided a kosher catered meal courtesy of Simcha Catering including separate silverware. I thanked Amanda Schnetzer, the director, for her courtesy and asked her to thank Mrs. Bush on my behalf.
The president spoke about his friendship with the Dalai Lama and that it was important to him and Laura that there are members of different faiths in attendance.
The Dalai Lama spoke about the deep connection between himself and the president. They share a deep kinship even though they may not always agree. He told us that he felt President Bush was wrong for invading Iraq and told him so at the time. He said that friends can have disagreements and still maintain strong bonds of friendship.
After the luncheon, we went to Moody Coliseum, where the Dalai Lama spoke to an overflow crowd of 5,000 people. Cokie Roberts of ABC News was the moderator.
The Dalai Lama talked about the unity of Mankind: all created by one G-d. He emphasized the need for people to think about others. That higher education is only good if it fosters the ideal of service to others. That nowadays too many people look out only for themselves.
He emphasized that we are social animals and that the “me, me, me” emphasis goes against that.
A social animal needs friends and that friendship is based upon trust.
Thinking about loving someone is not enough. That emotion has to be translated into actions and deeds. If you share something with 10 people it can lead to impacting hundreds and thousands.
He also pointed out that it takes maturity to realize one made a mistake and that realizing that we all come from G-d gives us the courage to act.
The Dalai Lama emphasized education for girls and women. He said it is they who put more attention on values. Females should take a more active role to promote compassion. Those treated with compassion by their mothers are more compassionate as adults.
In 2011 the Dalai Lama resigned from all political practices and has said that there need not be a successor to him.
His teachings, he emphasized, need to continue beyond his lifetime.
Parallels are often made between the Tibetan people’s exile in 1959 and the Jews’ exile from the land of Israel. Dharamsala, the Indian city that has become the Tibetans’ spiritual center, has been likened to Yavneh after the destruction of the Temple.
The Dalai Lama, a self-proclaimed admirer of the Jewish people, has met in the past with rabbis and leaders to learn more about Judaism and more specifically how to survive in exile.
He concluded by saying that more important than a birthday — a person should make each day a happy day.
Rabbi Howard Wolk is community chaplain at Jewish Family Service and founding rabbi of Congregation Shaare Tefilla. Email him at rabbiwolk@JFSdallas.org.