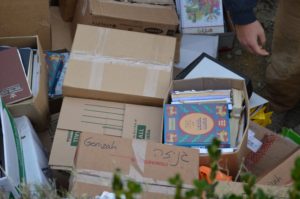 DALLAS — Rabbis and representatives of local Orthodox congregations and organizations gathered Dec. 14 to consecrate a new section of Mount Zion Gardens, part of the United Jewish Cemetery at Restland.
“This is for the next 50 years,” said William Finkelstein, president of the UJC, which is spearheading an effort to provide burial plots for the entire Jewish community.
While the United Jewish Cemetery has offerings for all Jewish residents, Finkelstein said the Mount Zion portions are specifically for traditional burial.
“It is open to everybody in the community seeking burial with halachic standards,” he said.
Finkelstein stressed that Mount Zion Gardens has the approval of all the local Orthodox groups. Several of them turned out for the ceremony, along with Rabbi Howard Wolk, community chaplain for Jewish Family Services. Members of Dallas Chevra Kadisha, Inc., a volunteer burial society, were also on hand. Its members help prepare bodies for burial in the traditional manner.
As Michael Wilfong, director of community outreach for Restland, pointed out, there are many small Orthodox congregations and families without affiliation.
“I knew the need for this additional area for the Orthodox had become critical,” Wilfong said. “The spaces in the Orthodox section are almost all reserved or occupied.”
A procession circled the perimeter of Mount Zion Phase II seven times, with the men chanting Psalms, followed by two memorial prayers, one for martyrs and the other for the fallen soldiers of the IDF.
Finkelstein said the verses in the Psalms speak about life, because the cemetery is not a house of death, but beis hachaim — a house of life.
The requirements for Mount Zion Gardens include a wooden casket, no embalmed or cremated remains, and the inclusion of Hebrew names on the tombstone. In addition, mourners may or may not rend their clothing, but may not use black ribbons. Some of the standards for the other gardens are a little different.
Phase I of Mount Zion at Restland has 160 plots, while Phase II has 200. There are now four spaces, including two at Sparkman Hillcrest, under the Mount Zion Gardens name.
“I think (Finkelstein) was pretty visionary, seeing the needs of the Jewish community, if you look at the cemeteries, you need to set aside a space for them and find a way to make it happen,” Wilfong said.
The need was recognized in 2000. In 2001, the Mount Zion United Jewish Cemetery group was created and purchased land at Sparkman Hillcrest for traditional burial.
“It sold out and prices went up, so we went to Restland,” Finkelstein said. “That was a new concept there, the United Jewish Cemetery.”
In 2008, the group bought land at Restland and put together three separate spaces: one for a second Mount Zion Gardens; one specifically for congregations to purchase (in this case, by Beth Torah); and Sinai Gardens, for the community at large, including the unaffiliated and families with non-Jewish members.
Over the years, Nishmat Am and Anshai Torah bought portions of the UJC land at Restland. Last year, a second portion of Mount Zion at Sparkman Hillcrest was created, but the need continued. Now, UJC has not only created a second location for Mount Zion at Restland, but additional spaces for the other existing gardens. Finkelstein said there are still unassigned areas he is hoping other congregations will be interested in.
Wilfong said it is not unusual for religious groups to band together for communal burial grounds. The Islamic Association of North Texas has a large area at Restland for their members, and the Christian Orthodox churches have a space, too. And while they don’t have a dedicated section of their own, Vietnamese Baptist churches have ensured that they are within the same general section.
In addition to the consecration, there was the burial of shaimos — sacred texts worn beyond usage.
Determining which texts are eligible is not always easy, as many materials can still be used again, even if nobody wants them. Just before they were buried, Texas Torah Institute’s Rabbi Daniel Ringelheim leaped into the pit to rescue a book that he felt might still be serviceable.
Donations were requested for each of the boxes of texts to support the Federation’s Indigent Burial Program, overseen by JFS.
“No member of the Jewish community should be denied burial because of finances,” Wolk said.
Wolk, who serves as halachic advisor to Mount Zion Gardens and Sinai Gardens, said it was “an important note of unity” to have the different Orthodox groups come together for the cemetery and the burial of shaimos.
“It needs to be demonstrated not just when burying holy books, but now and always,” he said.