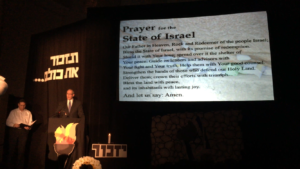 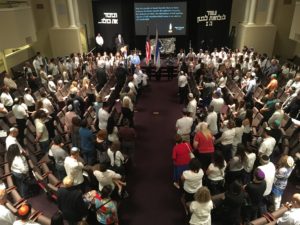 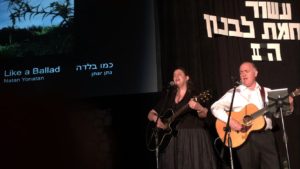 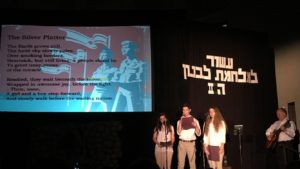 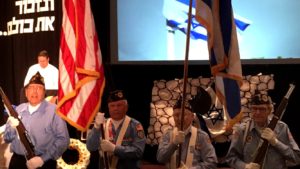 A tear-dropping, honor-offering, 425-plus-person crowd filled the sanctuary at Congregation Anshai Torah May 10 for the Community Yom HaZikaron Memorial Service, presented by the Jewish Federation of Greater Dallas and dedicated to recalling the memory of those lost in defense of Israel.
“My vision for this evening is always to include the whole community and by looking into the audience we feel the community all together,” said Ronit Ilan, for four years the Yom HaZikaron program chair. “From members of the Israeli Tzofim scouts, BBYO, the Dallas Israel Center and leadership of the Federation and from throughout the synagogue and organizations here, we are all one.
“The first time I came to this program in Dallas, I had been in the city about a year but that night, I felt like I was in Israel and among my people,” said Ilan, who served in the IDF from 1990 to 1996, a Captain of an Air Force Computer Software Unit. “To give tribute to those who fell, all here in one room, is true kavod (honor).”
One room, together, honored all, beginning with the moment-long call of a siren paying tribute especially to those lost during the Second Lebanon War. This year is the 10th anniversary of the month-long conflict between Israeli and Hezbollah forces in Lebanon during the summer of 2006, during which 119 IDF soldiers and 44 civilians were killed and more than 2000 were injured.
“We are proud to come together as a community to honor the men and women who have given their lives in defense of our homeland, the State of Israel, as well as the innocent civilians who were victims of terror attacks,” said Sarah Golman, JFGD director of Global and Local Impact and Allocations. “Yom HaZikaron is a day of great significance for Israelis throughout the world and it is our honor to stand united with Israel, as one community, to show our solidarity.”
The Memorial Service, which began with the presentation of the color guard by members of the Dr. Harvey J. Bloom Jewish War Veterans Post 256 — Allan Cantor, Harry Kabler, Dick Lethe, Leon Rubenstein — and members of the Israeli Tzofim, included a welcoming by Past-Chair of the JFGD Cindy Moskowitz, the reading of names of the fallen by Yaniv Nir, and readings and prayers by Max Castiel, Rabbi Yitzhak Cohen, Yuval Danenberg, Aya Pitkovsky Ehrmann, Gil Elan, Idan Pisek, Gal Reef, Ruth Schor, Wende and Rabbi Stefan Weinberg, Hila Zach, Sammy Zoller, and Cantor Itzhak Zhrebker.
“This ceremony is so meaningful because like all in Israel I have friends and family who were lost,” said Dr. Yoram Solomon, who led the memorial for the fourth time. He is an IDF veteran who served from 1982 to 1998 in the 35th Airborne Paratrooper Brigade.
Music raised the souls of those present and those in the hearts of all, with Jim Schwartz’s accompaniment as voices rang to the heavens with The Last Rain, sung by Noa Arad; Warriors’ Pain, sung by Tomer Damti; See You Later, Sweetie, performed by Sahar Aviram, and Raquel Gershon’s rendition of Like A Ballad.
“The voices I was blessed to accompany were not only incredibly talented, but so filled with passion and maturity,” said Schwartz. “I rehearsed only once with the young people and once with the adults but we all learned the music and it came together just beautifully. I’m honored to have participated and had a chance to give back through these very special performances.”
The reading of Ehrmann’s heartfelt letter to Dan Broyer and the tributes to the heroic lives of Roi Klein and Oz Tzemach, and the prayers of Yizkor, El Maleh Rahamim, Kaddish, the Prayer for the State of Israel, the Prayer for the Well-Being of the Israel Defense Forces and the singing of Hatikvah allowed for emotions of immense pain, loss, and pride, riveting all gathered.
“Indeed, I trust we will have many more occasions to welcome the greater community to our spiritual home,” said Rabbi Stefan Weinberg, who led the Prayer for the State of Israel during the program. “Anshai Torah is defined in good part by its level of community involvement as the number of Anshai Torah members who occupy significant Jewish community leadership positions is astounding.
“To welcome the greater community to Anshai Torah for this memorial service felt so good. We see ourselves as intricately identified with our greater community so, when we are entitled to host the greater community in our sanctuary, it seems as though we have fulfilled our mission,” Weinberg said.

Debbie Koeppel: swimming for a cause