For current and past “ranchers” — or campers — of Echo Hill Ranch, one fact remains the same: All refer to the camp as a home and to the staff and ranchers as family. 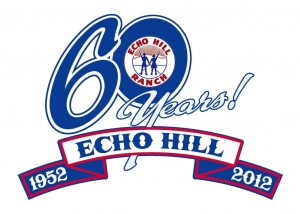 Family owned and operated by the Friedman family since its inaugural summer in 1953, Echo Hill is more than just 400 rustic acres of land nestled outside Kerrville, in the Texas Hill Country. Echo Hill Ranch is a place where 125 Jewish children come together from all parts of the world, including Israel, Mexico and Texas, to laugh, play and grow together each summer.
This summer is particularly special at Echo Hill, as it marks 60 years since camp founders S. Thomas “Uncle Tom” Friedman and Minnie “Aunt Min” Samet Friedman decided to turn their dream of running a child-centered, non-competitive camp for boys and girls ages 6 to 15 into a reality.
Merging Uncle Tom’s experience as a professor of educational psychology at the University of Texas and Aunt Min’s longtime dream of establishing a safe and healthy summer community for children, the two recognized that they possessed the passion and the formula to fill a void in the southwest camp community.
“In 1952 there was no (privately owned) camp experience available for Jewish children in the entire southwest,” said Roger Friedman, Tom and Min’s son and current co-director of Echo Hill, “There was no other camp for Jewish kids in this part of the country. That was something that my parents saw that was needed, and there was a huge response to it. And, by the way, we are still the only privately owned camp available for Jewish kids in the southwest.”
With the support of dedicated staff, counselors and families, the ranch on the little green valley would develop into a beloved summer home where original staff, counselors, campers and Tom and Min’s three children, Roger, Kinky and Marcie, would return year after year.
Yes, that Kinky Friedman.

For 32 years, Tom and Min co-directed Echo Hill Ranch, creating the strong foundation and connections that would lead to not only to the camp’s credibility, but also to its familial feel. Go to the horse corral, and you would see the familiar sight of wrangler Chuck Hart, a staff member since 1960, feeding, petting and talking to the horses; take a walk to the archery range or the crafts cabin and the Friedman children were playing with their friends.
Echo Hill Ranch provided the consistency of love and people that made campers and their families come back year after year, Roger Friedman said.
When Aunt Min died suddenly in 1985, there was no doubt that Echo Hill was going to continue. Roger, Kinky and Marcie began to assist their father in running camp. In particular, Marcie became the camp’s director in the 1990s. And after Uncle Tom died in 2002, Roger and his wife, Roz Beroza, became second-generation camp directors. Echo Hill Ranch, like the memory and spirit of Tom and Min, would continue.
Every summer, Roger, a psychologist and a professor at the University of Maryland School of Social Work, and Roz, a clinical social worker and family therapist, pack their bags and head from Maryland to spend their summer at Echo Hill. Roger was very accustomed to camp life after spending every summer at Echo Hill until he was 27 years old. For Roz, however, becoming involved in directing a camp was a fortuitous experience, a “new beginning.”
Roz, born and raised on the east coast, referred to her child self as a “camp failure.” She spent many a camp night crying for home and didn’t return to camp for a second year.

“There was something really full circle for me about marrying into a family where camp was the maypole. It just was ironic. I feel so lucky to be able to have another chance for the one I didn’t have,” Roz remarked.
Roger and Roz’s different camp experiences are what make their co-directing so magical. The two provided the necessary strengths to sustain the camp vision that Roger’s parents created.
Roger credits this vision of camp to his mother.
“In my mother’s mind, camp was not a luxury. Camp was as important developmentally as school was,” he stated.
Roger and Roz honor Tom and Min’s original camp by choosing to preserve the natural structures and values of the camp. The camp continues to run without air conditioning, electronics are not allowed, and campers swim in the local river instead of a pool. Additionally, the Friedman family continues in their parents’ giving nature by donating Echo Hill’s facilities and services to underprivileged families and foster homes for special one-week camp sessions.
“Roz and I, like my parents, have continued to pay close attention to kids’ individual development, the dynamics of the bunkhouse groups and the relationship between counselor and camper.” Roger said. “We talk to parents; they are our partners in helping their kids have a successful experience away from home.”

As much as they look to Tom and Min as inspiration, the Friedmans understand the importance of keeping things fresh, making “Jewish culture relevant to children now.”
Over the years, Roger and Roz have come up with new, innovative ideas such as adding Israeli singing and folk dancing to Friday night services, and embroidery as an arts and crafts activity. This summer, they have even hired Inda Cicelsky, an art educator and song leader from Kibbutz Lotan — which she and her husband, Alex, co-founded 29 years ago — in the Arava Desert of southern Israel.
At these times, “I think a lot about my parents and particularly my mother’s point of view about camp, though I don’t always agree with her, I often find it helpful to think about her perspective,” Roger said. “I think she had a really wonderful understanding of how to create a community for children that was safe and healthy emotionally.”
Grown men and women, parents of current campers, still vividly remember their summers exploring the valleys of Echo Hill Ranch.
“I remember all the secret places on the ranch,” said Andy Reisberg, former camper, camp parent and now Echo Hill archivist. “I can always smell the sycamore tree. I can remember taking my free time with some of the guys and going fishing with home made poles and being like Tom Sawyer and Huck Finn. Often times when I am depressed I can go back to that little fishing hole,”
With the 60th anniversary approaching, Reisberg now has the unique opportunity as an adult to utilize his profession to better understand Uncle Tom, the man he admired as a young boy.
“I am now having a chance to delve into archives, contents of Uncle Tom’s desk from the lodge,” he said. “I guess his desk was never opened or disturbed. I am looking at original letters from the 1930s. The writing is courageous, ambitious. My memory of Tom is enhanced by these writings, these notes on how to put a camp together.
“Videotaping, getting people together, this anniversary is not just another event or a party for me. I did all my growing up at Echo Hill. It is a great opportunity for me to document this as it is a perfect marriage of my profession and my deep connection to Echo Hill.”
Directors, staff and campers alike are excited about the 60th anniversary reunion celebration, which will take place July 20-22 at the camp. Marcie Friedman foresees the weekend as celebration of all things Echo Hill with “campfires and fried chicken.” She is also looking forward to the sharing of stories about her parents and brothers Roger and Kinky.
Like Marcie, alumnus Cristy Herman, past camper and current camp photographer, views this 60th anniversary as a time for reflection.
“I remember hanging out with Aunt Min and she showed me how to feed the hummingbirds,” she said. “I had just gotten my first camera, and we would see if we could try to see their wings. Several years ago I bought a small hummingbird ornament, and I keep it in my house to remember her.”
For others, a 60th reunion is a time to give credit, understand success and evaluate how it has been achieved.
“Echo Hill’s success is measured with each child that returns to camp year after year, and measured in the second and third generations of children who are counted in the roll call,” Reisberg said.
Hart, the wrangler, defines the lasting spirit of camp through its positive messages,
“Echo Hill is a child-centered non-competitive camp,” he said. “Sure, we play soccer, but there are no winning teams. It is about what you earn, you accomplish on your own at Echo Hill. Here, you learn about life,” he said.
For others, like Beroza, it’s a time for laughter and pride.
“It’s funny, when you have parents that pick their kids up at the end of the month. They say ‘oh my gosh, you got so big, so tall,’” she said. “I mean, they could not have grown seven inches. I think that maybe they are standing up in a different way. They are standing bigger. ”
And for Marcie, Aunt Min and Uncle Tom’s youngest child and only daughter, the 60th anniversary is a time when the spirits of past campers and her parents will come alive.
“Sometimes you see people for a moment or two, and you see them as that little boy or that little girl. You can see their face inside their face. That spirit is still there. The reunion, getting together with old friends, brings those moments to life. And sometimes, if you come around the building around the right time, at a certain angle, you really see all of that, your old friends as children, and Tom and Min still there,” Marcie said.
To learn more about Echo Hill Ranch, visit www.echohill.org.