DALLAS — Congregation Shaare Tefilla will host the second annual Massive Morning Minyan in its main sanctuary at 8 a.m. Sunday, Sept. 17.
The event is an open invitation to the community to celebrate the end of the Jewish year together and remember, at a time when the focus is on the High Holidays, that the everyday services can also be meaningful. 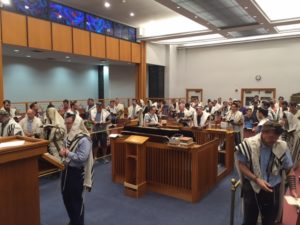 “I would love to see as many people as possible and participate with them in this truly memorable experience. Consider this a personal invitation,” said Rabbi Ariel Rackovsky. “People wake up early for all sorts of reasons — for carpools, to get to work on time, for exercise purposes. Why not wake up early for prayer?”
Last year, about 150 people filled the sanctuary, located at 6131 Churchill Way.
“Everybody gets together on Rosh Hashanah and Yom Kippur. Those are big, huge momentous days for most people and it is part and parcel of their Jewish faith,” said Joe Ravitsky, Shaare Tefilla’s president. “This is Sunday morning, no extra words, extra services. It usually takes about 35 minutes. We are taking something very simple, very mundane, the everyday minyan that everybody has access to, and we’re publicizing that the way we would when we all come together on a major holiday.”
Ravitsky pointed to the struggle many congregations have on weekdays and Sundays despite the way the High Holidays demonstrate a desire for togetherness.
“No matter what synagogue you go to, there’s a camaraderie, but it’s only through regular attendance,” he said. “But it’s difficult to attend regularly if you don’t know anybody, and to make it meaningful, you have to know people. It’s a chicken-and-egg problem.”
Rabbi Rackovsky, who came to the Modern Orthodox synagogue in 2015, gave credit for the idea to his wife’s cousin, a rabbi who started a “100 Man Minyan” at Baron Hirsch in Memphis.
“I decided we were going to upgrade that because we could do better than 100, and didn’t want to hold us to a number,” Rackovsky said. “I wanted to do it during Elul as a way of preparing for the High Holidays, a community display of prayer.”
He spent a month advertising it within the synagogue last year, and a week and a half inviting people personally. He also gave Ravitsky, then the vice president, a lot of credit for getting the word out.
“Last year succeeded beyond my wildest dreams. People came who are not regulars at a weekday minyan — at least not yet,” Rackovsky said. “I don’t know that we necessarily picked up more regulars, but what I want at the very least is plant the seed in people’s mind that a communal expression of prayer, even on a Sunday morning, is valuable and that it leaves a lasting impression.
“People want to sleep in on Sundays. That’s why our tagline is ‘start off the week and end the year the right way.’”
After the service, a gala breakfast will be held. Among those helping out with the preparation are Jacques Ohayon and Michael Vidikan.
“We have unbelievable Kiddushes every week, a kitchen crew of volunteers where every one of them could have their own restaurant,” Ravitsky said.
Stuart Wernick, the immediate past president, took advantage of the big crowd last year to take some photos capturing a full sanctuary — something more common when photography isn’t permitted.
Wernick sees the Massive Morning Minyan as a chance to continue the combination of a close-knit feel and high attendance from Friday and Saturday services. It’s something he hopes will become a habit.
“Why not? Why does everyone just show up Saturday or Friday night? Let’s keep this going on Sundays as well,” he said.
Giving a regular service extra meaning is also important for those who attend every day, he said.
“You lose sight of that fact that if you are doing something so often it seems second nature,” Wernick said. “Maybe we should celebrate that a little bit more.”
Ravitsky mentioned the impact that having so many Jews together tends to have on their connection to their faith.
“You can take something that’s regular and uplift it, turn it into something special through you making it holy, saying this thing is different,” he said.
Rabbi Rackovsky also hopes there is a memorable takeaway for Shaare Tefilla’s guests Sunday.
“I want to open portals of entry for people to get further and better engaged in their Jewish expression and religious commitment. While we are accepting of everyone where and who they are, we don’t want people to be complacent about themselves. Everyone should always be growing.”

Shearith Israel to host ‘Save a Child’s Heart’