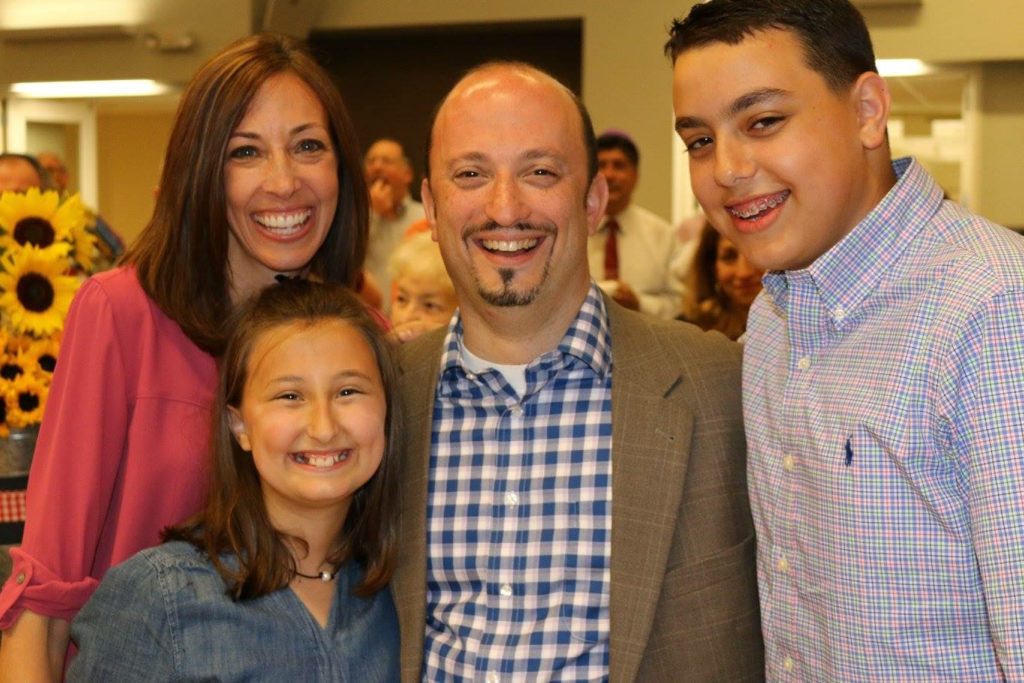 By Amy Sorter
Special to the TJP

Ari Sunshine was on a pre-law track at Brandeis University in Waltham, Massachusetts, when he joined the United Synagogue Youth (USY) on Wheels. He realized two things while on the six-week national teen bus tour.
First, Judaism is portable. “The cool thing I learned on that trip was, wherever you are, you’re bringing your Judaism with you,” he said.
And second, he wanted to become a rabbi.
“Judaism had permeated my life, and I realized it would be fulfilling to share that passion with other people,” Sunshine remarked.
Many years after that epiphany, Rabbi Ari Sunshine is the new senior rabbi at Congregation Shearith Israel in Dallas, and is ready to share his passion for, and portability of, Judaism. Sunshine takes the leadership reins from Rabbi Daniel Pressman, who has served as the congregation’s transitional rabbi for the past year.
In taking on the new role, Sunshine is embarking on some journeys of his own. Born and raised in Potomac, Maryland, the rabbi’s travels took him from Maryland, to Massachusetts, to New York, to North Carolina and back to Maryland. He traveled to Toronto where, at a USY youth convention, met his future wife, Jennifer. “She lived in San Diego at the time. We were both youth workers, and dated long-distance for a year and a half,” Sunshine said. “Then we married, moved to New York, and I started at the (Jewish Theological) seminary.”
Now, for the first time, the East Coast man is in the south-central United States.
“The appeal is the congregation,” Sunshine said, explaining why he accepted Shearith’s job offer. “Shearith Israel has a long, stable and storied history; it’s multigenerational and a strong institution in the Dallas Jewish community.” Also appealing, he continued, were the staff and lay leaders.
While physical travels brought Sunshine to Dallas, he is also journeying from an internal comfort zone. His career background includes positions as youth director and senior USY adviser at Temple Israel in Sharon, Massachusetts and associate rabbi of Temple Israel in Charlotte, North Carolina. For the past decade, he led B’nai Shalom’s congregation in Olney, Maryland. All three congregations are medium-sized, especially compared to Shearith Israel.
“One of the things that is most important to me, in the rabbinate, is that I want to know everyone in the community, and learn and know everyone’s name,” Sunshine explained. “I was wondering how that would work in a congregation with 1,000 families.” After talking to the Shearith leadership, “I thought that, in time, we’ll pull that off,” he said.
It is, in fact, Sunshine’s genuine interest in people and their lives that warmed Shearith Israel’s rabbinic search committee to both him and his wife. “What is unique about Rabbi Sunshine is that when you meet him, he wants to know your name, your spouse’s name, your children’s names, what you did, and why you came to Dallas,” said Gail Mizrahi, who served as Shearith’s congregation president during the rabbinical search. “Later on, he’d remember your name, your wife’s name, your children’s names. He connects at a very personal level, that few of us had ever seen.” That personal connection, Mizrahi went on to say, was important for the congregation.
Even through internal and external travels, Sunshine’s foundation springs from a very strong faith. Calling his upbringing “the poster child for Conservative Jewish living,” Sunshine grew up in a kosher home, in which Shabbat was strictly observed; the family walked to shul every Saturday. His elementary education came through Charles E. Smith Jewish Day School (in Rockville, Maryland); summers were spent with USY’s Ramah Camping Movement.
By the time he entered Brandeis, Sunshine was moving toward a more secular path, majoring in politics, with an economic minor, and an eye toward an eventual law degree. But Judaism was never far away. He was active with Hillel at Brandeis University. And, at one point, he witnessed a debate that hit close to home: the discussion focused on rabbinic school versus law school. “That got me thinking in terms of connections,” Sunshine said. “The Jewish laws made up a huge part of how I was living.”
That thought crystalized into a solid purpose and action during his USY on Wheels tour. “I found it pretty amazing, that Judaism permeates every decision and moment in our lives,” he pointed out.
To that end, Sunshine’s plan is to bring Judaism to the Shearith congregation. He’ll soon be concentrating on getting his wife, Jennifer and two children, Jonah, 14 and Elana, 12, settled. The high holidays are also around the corner. Beyond that, Sunshine wants to focus on building micro-communities, networks within the larger congregation, that can create and live, Jewish experiences.
“We have to be able to engage and empower people in smaller groups and networks,” he said, adding that the process is less about getting people into Shearith Israel’s Douglas Street shul or Levine Academy’s Beit Aryeh at Hillcrest and Frankford. Rather, it’s about programs that will “create a powerful and impactful Jewish experience, that can lead to other Jewish experiences, and more involvement,” Sunshine said. The process will involve reaching out to people in different ways, through different locations, he said, adding that “it’s a journey, as it were.”
And, Sunshine knows plenty about journeys.