By Sean Shapiro
Special to the TJP 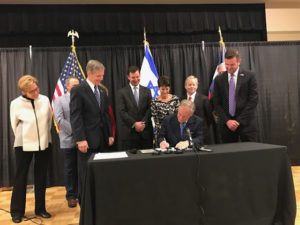 Better known as the anti-BDS bill, the law now prohibits the state of Texas from conducting business with companies in the Boycott, Divestment and Sanctions Movement against Israel.
“Texas is doing its part to add a little bit to that independence by fighting back against those who try to boycott Israel and impose economic harm to Israel, you can always count on Texas,” Abbott said before signing the bill.
“Any anti-Israel policy is an anti-Texas policy,” Abbott added. “Any boycott of Israel is to be considered un-Texan. And Texas isn’t going to do business with any company that boycotts Israel.”
Abbott used multiple pens to sign the bill, and one was handed to Representative Phil King that will eventually be delivered to Israeli Prime Minister Benjamin Nethanyahu.
It was a rewarding moment for many involved in the bill’s passing, including King, who helped spearhead the effort.
“It’s exciting, it’s always exciting when a bill finally signs, but I can tell you this is an incredibly emotional event,” King said. “A lot of us have worked on it for so long. We think it’s important. When the 10th-largest economy in the world says we’re not going to let people boycott Israel, that’s a big statement.”

When the bill was first announced, King told the Texas Jewish Post that this would be a bipartisan issue and he hoped it would move quickly through the House and the Senate.
He was right. The bill passed by a vote of 25-4 in the Senate and then passed by a 131-0 margin in the House before it was sent to Abbott for final approval.
“A lot of people had to learn about the bill, but each and every time someone learned about the bill — Democrat, Republican, conservative, didn’t matter who — the more they learned about it the more they agreed this is exactly what Texas needs to do,” King said. “And at the end of the day it was as solid a vote as I’ve ever seen for any bill.”
King said much of that success is owed to the Jewish community, which made its voice heard throughout the process.
Charles Pulman was one of the first people to reach out to King about the bill. He made an unsolicited phone call to King and quickly became one of the go-to liaisons for the bill within the community.
“I had read somewhere that a state somewhere had passed a bill about anti-BDS, and I sent an email to some friends in Dallas asking if anyone knew if anything was happening for this in Texas,” Pulman said.
Pulman’s friend responded and said he heard that a representative by the name of King was working on an anti-BDS bill, so Pullman looked King up and sent an email to the representative from Weatherford. 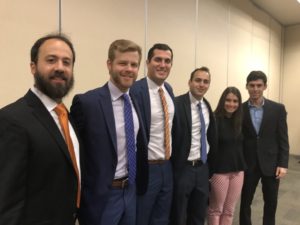 “I said, if you’re working on an anti-BDS bill I’d like to help, and he responded almost immediately and said, ‘Yes, let’s have dinner,’” Pulman said. “And that dinner was a year ago March, and now we come to May 2 and the bill has been signed.”
In November, Pulman was part of a meeting at the JCC in Dallas where community leaders planned and discussed ways to promote the bill. Over the next seven months, groups from across the Jewish community in Texas reached out to representatives, made phone calls, sent emails, and visited the capital to show support for the legislation.
“Working with the Jewish community and all the groups involved was wonderful,” King said. “This was a bill that wasn’t hard for anyone to support, but to see what the community did and the strides they made for this bill, that only made it stronger.”
From the early stages, Abbott was in support of the bill and the governor visited Israel last year along with Ambassador Eitan Levon, the consul general of Israel to the Southwest.
“We really appreciate the cooperation and work between the people of Texas and the people of Israel,” Levon said. “The two Lone Star States, as we say, are standing with each other.”
Texas is the 18th state to pass some form of anti-BDS legislation, and King said it should be used as a benchmark and example for the rest of the country.
That number also had extra importance to Pulman. 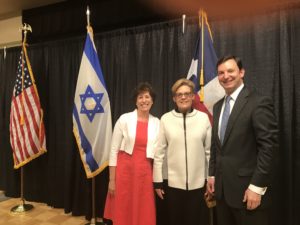 “Texas is the 18th state, 18th,” Pulman said. “Eighteen in Hebrew means life. It’s not by coincidence that Texas became the 18th state to pass a version of an anti-BDS bill.”

Dignitaries respond
Around the Metroplex, several community leaders voiced their support for the law:
“ I’m proud of the strong statement Texas made today by standing firm as an ally to Israel.”
— Rep. Craig Goldman (R-Fort Worth)
“The Federation is proud to lead all the Federations in Texas in supporting this bill. We found a problem, we convened communities and organizations and fought for change. Congrats to us all.”
— Jewish Federation of Greater Dallas Chair Daniel Prescott
“It was such an honor to join Jewish leadership from throughout Texas and other local and national Jewish organizations at today’s  ceremony where Governor Abbott signed into law the strongest anti-BDS bill in the country. The JCRC was pleased to be part of the coalition that helped pass this bipartisan bill through the Texas Legislature. It is a testament to the strength of the economic, cultural and social partnership between Texas and Israel.”
— Jewish Community Relations Executive Director
Anita Zusman Eddy

… They shed a sweet light

M is for Matisyahu … Maccabeats … and Music