By Arlene Nisson Lassin
Special to the TJP

On Thursday, Nov. 9, right before Veterans Day, and the anniversary of Kristallnacht, a poignant afternoon unfolded on the floor of the Texas Senate in Austin. Six Texas-based veterans of World War II, now aged from 92 to 96 years old, and 28 families of other veterans around the state were honored in a ceremony in the Texas Senate Chamber. Included in that group was Chester “Chet” Rohn, of McKinney, now 93 years old. 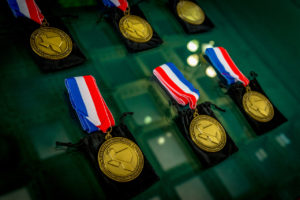 Coordinated by the Texas Holocaust and Genocide Commission (THGC), all of these men were involved in the liberation of Nazi concentration camps at the end of the war. Survivors from the Holocaust were on hand to present special medallions to all the veterans and their families for their heroism in being part of that liberation. In all, 335 Liberators throughout Texas have been identified, and more than 200 were sent invitations to attend the special ceremony. Although 20 of these men are still alive, due to health reasons only six could personally attend.
Over 700 people packed the Senate Chamber for the ceremony, including many families from the Dallas area.
Fran Berg from Dallas is one of the commissioners on the THGC and chaired this event. She and her family attended to accept the medallion on behalf of her late father-in-law Lee Berg, of Dallas, a camp Liberator.
“Holocaust education is ethics education,” Berg said in her remarks. “My father-in-law was one of the Texas Liberators of Dachau. He never spoke of the war, except to share his testimony one time on videotape 50 years after the war… He compartmentalized his memories. He tried to forget. I use him as an example because I know that many families in this room have had the same experiences, and as difficult as they (memories) may have been, they are also a gift. While Nazis sought to destroy lives and eliminate memory, the Texas Liberators are the true victors, for they leave us all with a memorable legacy of human-kindness after shattering, and hope after despair.”
For the survivors on hand, including Rabbi Sidney Zimelman of Fort Worth, the act of presenting medallions to the men who set them free brought closure and a chance to say thank you.
Several second-generation survivors handed medallions to second-generation family members of the veteran Liberators. One notable second-generation family represented the late Reverend Wilson Canafax of Fort Worth, who liberated Elie Wiesel, and whose son Elisha sent special remarks to give personal thanks.
State Senator Don Huffines was another of the Dallas area second-generation family members to receive a medallion. His late father James Huffines was one of the Liberators.
Florence Shapiro, former state senator from Dallas and chair of the Dallas Holocaust Museum/Center for Education and Tolerance, was on hand and gave opening remarks. Her mother and late father were survivors, and she lost many members of her own family in the Holocaust.

Tracking down the Texas Liberators from World War II and getting their testimony was an ambitious project taken on by THGC some years ago. It is just now going live and available to all, including educators and students who are studying this part of U.S. history. Find comprehensive information on this project and resources at http://texasLiberators.org/.
In the educational component, Peter Berkowitz, commissioner and former chairman of the THGC, was a man on a mission. Berkowitz was upset when he found out his grandson did not learn about the history of the Holocaust in his high school history classes. Although the Holocaust is mentioned in some history curricula, it was never part of the official curriculum for students all over the U.S., like Berkowitz’ grandson, who take Advanced Placement (AP) US History.
Around 2014 the THGC, based in Austin, and the U.S. Holocaust and Memorial Museum (USHMM) decided to combine forces to add Holocaust study to existing AP U.S. and World History courses taught throughout the United States to high school students. At first, there was pushback from the AP people on adding to the existing curriculum, but eventually, in 2016, with curriculum written by THGC, it was added to U.S. History. USHMM wrote the World and European History Curriculum addition. (Explanation of the AP History project is at another online site, http://theLiberatorproject.org/)
The liberation of concentration camps by American troops was the focus of the additional history material, and THGC involved Texas Tech University, whose faculty and students took on this project to create resources including eyewitness testimony from Liberators. The Texas Liberator project, commissioned by THGC and led by Dr. Aliza Wong, associate dean of the Honors College at Texas Tech, includes two-hour videos of 21 Texas Liberators, where each veteran gives eyewitness testimony on the conditions they found as they liberated the concentration camps.
The expanded project now includes the taped interviews; a book titled The Texas Liberators, with photos and written testimony; a museum exhibit at Texas Tech; and an interactive application that students can use in the classroom. The application allows visitors and students to walk through the Dachau death camp at liberation with narratives by the Liberators. All are available on the first website (TexasLiberators.org).
For many of the soldiers, including a majority who are not Jewish, it was impossible to put into words the horrors they witnessed during the liberation of the camps, and they could not speak of it for many decades. In the Dallas area alone, 32 veterans were identified as camp Liberators, many identified by family members after an online survey was circulated to veterans and families of veterans. 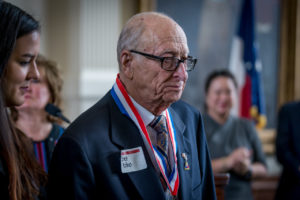 “Many of these veterans lives were forever changed by the scenes of inhumanity,” said Peter Berkowitz. “Most could not speak of what they saw in the camps but when we approached them and they did speak about it, all of their stories were similar. All of them were still haunted by the sights of emaciated people, and so many innocent victims, civilians’ deaths.”
Three of the videos included in the 21 are testimonies from Dallas-area men: John Jack Reynolds, Lee Berg and Melvin Waters. Many of the men speak with tears in their eyes, overcome by emotion at the memory of what happened to people in the camps.
The narratives are to help students better engage with and relate to what can seem like unbelievable stories of horror and cruelty to a group of human beings in the Holocaust.
“If you ever heard the term dead man walking, that describes what we saw,“ said the late Wilson Canafax in his taped testimony.
Another veteran, William Dippo, added that what he saw and the condition of the people in the camps was worse than anything he ever saw on the battlefield.
Other resources are available to visitors, educators and students as well on the website.