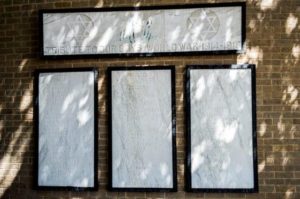 By Hollace Ava Weiner
Special to the TJP

The marble tablets, etched with the names of 81 Jewish doughboys, impart lessons about monuments, memory and changing perceptions of the Great War waged a century ago.

Unveiled in Fort Worth with fanfare on Armistice Day 1920, the 10-foot-tall, World War I Tribute To Our Boys was embedded in a lobby wall at the Hebrew Institute, a recreational and educational center that was part of Fort Worth’s Ahavath Sholom decades ago when the Jewish community was centered downtown on Taylor Street. The war memorial, with its two Stars of David and a pair of American flags, expressed ethnic pride in a patriotic context and added layers of meaning to the building.
On April 1, Ahavath Sholom plans to invite families and descendants of the soldiers listed on the honor roll to a special Sabbath morning service. More than 20 of those listed have family or descendants living in Fort Worth.

Yet in 1951 when the Hebrew Institute closed, there was no designated space for the monument in the synagogue that replaced it on Eighth Avenue. The honor roll was dismantled and its marble slabs stacked in a storage room. Forgotten for the next three decades, this piece of public art was rediscovered in the autumn of 1980 as the congregation readied to move into its next building at Hulen and Briarhaven. Overjoyed at the discovery, Building Chairman Al Sankary, whose father’s name is on the monument, opted to frame the four marble tablets and hang them in a landscaped courtyard at the entrance to the synagogue.

Amid the excitement, no one realized that part of the original montage was missing — a fifth marble tablet inscribed with the name of its sponsors, the Ladies Auxiliary to the Hebrew Institute. Inexplicably, an element of community history acknowledging efforts of women on the homefront had disappeared. Nonetheless, the newly framed-and-arranged marble roster looked artistic and dignified in its outdoor setting. The veterans’ names, etched in black, were visible from afar: Adelberg, Cohn, Gernsbacher, Jacobs, Levy, Katz, Rosenthal, Sturman. Descendants of these soldiers still lived in Fort Worth. The monument conveyed continuity, l’dor vador, from generation to generation.
But, with exposure to sun and rain, the dark ink highlighting each veteran’s name faded. In the past year, as America readied to commemorate the April centennial of the country’s entry into the First World War, the Fort Worth Jewish Archives began researching the soldiers named on the tablets.
A call for World War I memorabilia reaped vintage photos of Pvt. Shady Sankary, Pvt. Eph Rosen, Sgt. Byron Gernsbacher, Pvt. Sam Sheinberg, Pvt. Isaac Sturman, and others, along with mess kits, helmets, bayonets, binoculars and keepsakes. These are on display in special exhibits at Ahavath Sholom and Beth-El.
Most important, Ahavath Sholom’s landscaper and cemetery caretaker, Bob Sumien, a Catholic and an Air Force veteran, volunteered to restore the monument. Throughout the summer, fall and winter, he inked in the 81 names, installed lighting, and returned the marble honor roll to visibility.
“They deserve it,” Sumien said, explaining why he and employees at his company, Professional Irrigation, spent countless hours bringing the memorial back to prominence. Many congregants have asked if this work of public art, with its red-white-and-blue flags and blue Magen Davids, is brand-new.
At the Ahavath Sholom ceremony, Rabbi Andrew Bloom plans to call them to the bimah and lead memorial prayers in front of the honor roll. 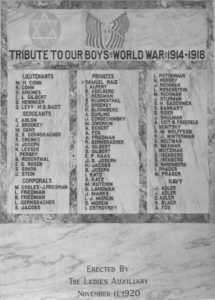 Ahavath Sholom’s doughboy monument has been added to the map of First World War sites created by the Texas and U.S. World War I Centennial Commissions. Art historian Mark Levitch, who is on a quest to inventory every World War I monument in America, has documented damaged, vandalized and crumbling statuary nationwide. He is pleased at the restoration work completed in Fort Worth.
“In our country, we give most attention to World War II and the Civil War,” says Levitch, who lives in Washington, D.C. “World War I is very much overlooked.”

Continuing the intermarriage conversation is crucial