Just as the pages turn for readers of the Margot Rosenberg Pulitzer Dallas Jewish BookFest, so does the events calendar.
At 7 p.m. April 26, author Janis Cooke Newman will discuss A Master Plan for Rescue at the Aaron Family JCC.
“A Master Plan for Rescue is a demonstration of how storytelling is so much a part of life and of each person’s own story,” said Diane Calmenson, a Tycher Library ambassador. “The friendship that develops between the two main characters is sweet and significant. For the Tycher Library, it is important that we’re able to share such a treasure, the Spring Read, (which is) an opportunity to bring the community together.”

Cooke Newman’s first book, The Russian Word for Snow, a memoir about adopting her son from a Moscow orphanage, was written as the book about adoption she couldn’t find for her own family.  Her second book was Mary: Mrs. A. Lincoln. She is the founder and curator of Lit Camp, a nonprofit juried writers’ conference and a writing program at the San Francisco Writers Grotto.  Having published many travel articles, which have appeared in the Dallas Morning News and other periodicals, Cooke Newman is anticipating her first trip to Dallas.
“I’ve heard great things about the BookFest and I’m excited to be included,” she said.  “I was prompted to write this book while in Washington, D.C., doing research for Mary. I went to the United States Holocaust Memorial Museum and learned about the voyage of the St. Louis, a German ocean liner and how there were close to 900 Jews with visas headed for Cuba. Close to shore, the president of Cuba announced they were no longer welcome and the ship headed up the Atlantic, but President Roosevelt also wouldn’t permit entry. The ship returned to Europe where, while Belgium, France and England each allowed some entry, most on board perished during the war.”
Set in 1942 New York and Berlin, A Master Plan for Rescue, named a Best Book of 2015 by the San Francisco Chronicle, is the story of a Jack, a young American boy who struggles to cope with the death of his dear father and Jakob, a German-Jewish refugee as he mourns Rebecca, left behind in Berlin. As their stories intertwine, an unlikely friendship is born, and together they embark on a dramatic adventure that changes the course of both of their lives forever.
“I didn’t know about the raging anti-Semitism here and I knew my next book had to have a character who was on that ship and from that experience,” said Cooke Newman who took seven years to write Jack’s tale, working through the writing from the point of view of a 12-year-old boy. She finally realized she could write in the style of him looking back on life — rather than in the moment.
“I’ve never been a 12-year-old boy, but my son was just that when I started writing this book.” 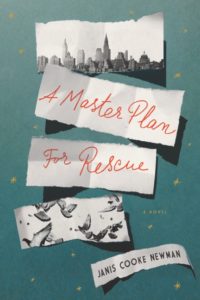 Cooke Newman brings much of Jack to life through the stories of the New York City-based childhood her own father, George as well as the experiences of her son Alex.
“The Dyckman Street apartment is where my dad lived and I’ve been on that roof and the radio shows that Jack listens to, he told me about,” she said. “The fantasy meets reality world that a 12-year-old boy lives in, I was living with my own son and I wanted to capture that.  How would someone feel to lose the person most important to them — how, through his eyes?”
The Center for Jewish Education of the Jewish Federation of Greater Dallas’ Tycher Library presentation of A Master Plan for Rescue closes the 2016/2017 Margot Rosenberg Pulitzer Dallas Jewish BookFest.
“There’s lots to talk about on this book; so many characters, the love story, the sad and redemptive moments, and so it really is a great book club choice,” said Cooke Newman.  “Each of the characters has a disability, or a talent, providing so much texture.  I’m really excited to meet those who’ve read the book, and even those who haven’t – yet – and to connect with your community.”
Liz Liener, who chaired BookFest for a fourth year, and who is looking ahead, says “we are looking forward to many wonderful opportunities for this next year and, as always, we greatly appreciate the generosity of our sponsors.”

The 2016/2017 season opened with a sold-out crowd of more than 500 who welcomed author Daniel Silva who shared his The Black Widow followed by authors Nancy Churnin (The William Hoy Story: How a Deaf Baseball Player Changed the Game), David Eliezrie (The Secret of Chabad), Jessica Fechtor (Stir: My Broken Brain and the Meals that Brought Me Home), Nancy Sprowell Geise (Auschwitz #34207), Shep Gordon (They Call Me Supermensch: A Backstage Pass to the Amazing Worlds of Film, Food and Rock ’n’ Roll), Roger Horowitz (Kosher USA: How Coke Became Kosher and Other Tales of Modern Food), Jo Ivester (The Outskirts of Hope),  Dr. David Patterson (A Genealogy of Evil: Anti-Semitism from Nazism to Islamic Jihad), Susan Ronald (Hitler’s Art Thief),  Liliane Richman (The Bones of Time), Chanan Tigay (The Lost Books of Moses), and Gavriel Savit (Anna and the Swallow Man).
Preparing for the coming year, Rachelle Weiss Crane, producer of the Margot Rosenberg Pulitzer Dallas Jewish BookFest, is among those who will attend the Jewish Book Network conference in May.  Already set, for Dec. 4, is Martha Hall Kelly, author of Lilac Girls, an event that will be a joint presentation of BookFest, Dallas Holocaust Museum Center and Tycher Library.
For more information or to register for the Tycher Library Spring Read, visit jccdallas.org/main/bookfest.

Behind the Pages: Zsuzsanna Ozsvath