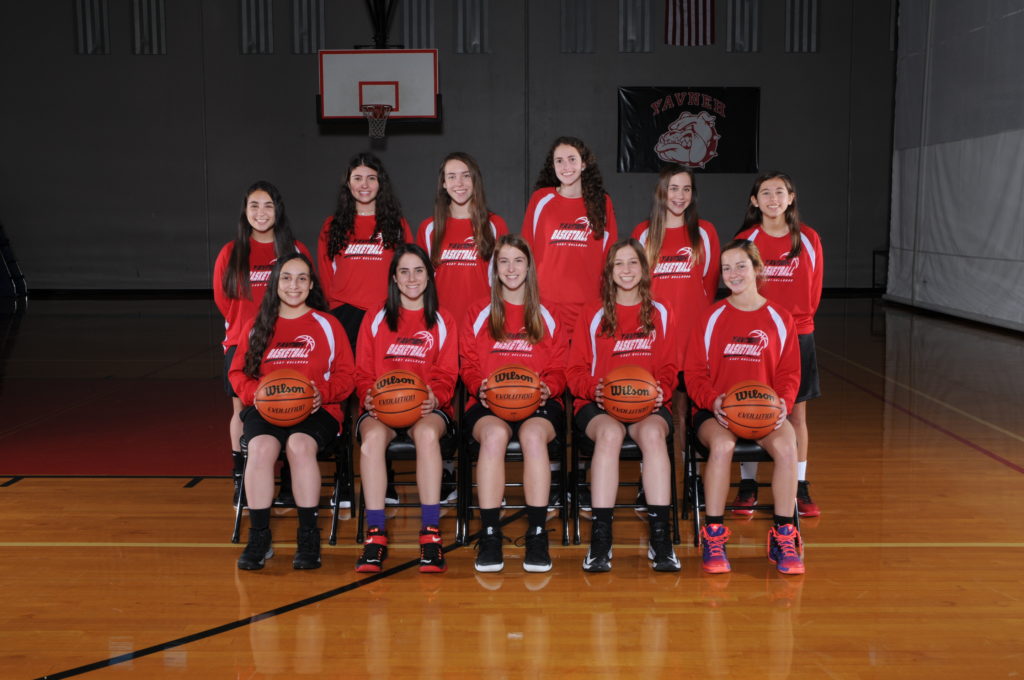 The biggest night in Yavneh girls’ basketball history wasn’t supposed to even happen, at least not this year.
On Tuesday night, the Yavneh girls’ team opened a playoff doubleheader with the boys’ team, thanks to the kindness of their opponents. The game took place after press time. The boys’ team (29-0) played Watauga Harvest Christian (12-13).
“This game was supposed to be neutral against Amarillo Ascension Academy. Their athletic director called me up, and we had this amazing conversation where he said he knew how much this meant to our community,” said Yavneh Athletic Director and Boys’ Coach David Zimmerman.
As a result, the Cardinals (13-8) came to Dallas, giving Yavneh’s girls team its first-ever playoff home game and a chance for all-time leading scorer Anna Wernick to play before the home crowd one more time.
“They were very understanding of what it meant not only for us and our kids, but our community to play those games back-to-back with the boys’ team,” said Girls’ Coach Derrick Martin. “It was special. I was really thankful that they did that.”
Getting to the playoffs in the first place, and especially as a reasonably high seed, was a huge deal in itself. The Bulldogs struggled mightily to win games just a few years ago. This time around, they went 17-11, including 10-2 in district play to earn a co-championship. They lost the tiebreaker for hosting a game.
That was after the graduation of their longtime leader, Jacquie Mitzner, and after an injury to up-and-comer Jenna Sasson, who tore her ACL just a few games into the season. The Bulldogs had to find their voice through trial and error.
“It took a little while. The leadership, some of the games we dropped early, were trying to figure those things out,” Martin said.
“The prior three years, Jacquie Mitzner was an unbelievable leader, who always made sure we were set. At the beginning of this year, you could tell we were missing something.”
The Bulldogs managed to go 4-4 to start the season. But then came the Weiner Memorial Tournament in Baltimore. Yavneh finished third, but got a lot more out of it than a few wins.
“We faced tremendous competition,” Martin said. “It puts us through the fire, so when we got into our district, we came out more confident. This year was even better, because we found ourselves halfway through that tournament.”
Martin said Wernick and sophomore Jessica Lampert, the team’s second leading scorer, were learning how to adapt to coaching critiques and started communicating better with their teammates. As a result, other girls started to step up their game and become better leaders, notably senior Rachel Sasson.
“It’s been more of a group effort this year. They are not only leading with words, but with actions,” Martin said.
Following the tournament, the Bulldogs had a solid run through the district, including eight straight wins. Martin said adjustments to their defense made during the tournament helped.
“The nice thing is you play all those games in a week and work through those things relatively quickly,” he said. “Before the tournament, we were trapping full court. Now we are half-court or three-quarters. We changed some things stylistically.”
Along the way, Wernick became the program’s first player to reach 1,500 points. She averaged 15.8 points, 5.8 rebounds and 3.5 steals. Lampert is averaging 8.3 points, and freshman Liel Guttman averaged 4.8 points, 3.7 rebounds and 1.9 blocks.
The defense is what drives this team.
“Anytime you are a team that struggles to score, you’ve got to figure out a way to get easy baskets,” Martin said. “Defensively, I knew we had the ability to be good. It was focusing on the different types of defenses we could run. With this team, we run multiple defenses. Last year, we did a little of this, but this year, every defense you can think of.”
Wernick and senior Jordyn Lax were there when the team was at a low point.
“They’ve been though the days of ‘Are we ever going to win a game?’ to getting a home playoff game,” Zimmerman said.
Last year, Yavneh made the playoffs for the first time, going 11-16.
“We played Midland Classical, one of the top girls’ programs in the state,” Martin said. “They overwhelmed us. A big part was our lack of experience. But it was a great experience going into this year, because we were able to build off it.
“We’re really hoping this year we can make a run, string a few wins and see how far we can go.”
Because Ascension is from Amarillo, they have no common opponents. Martin knew little about them, except that the team has six players on the roster. That will change in the next round.
“If we are fortunate enough to get past them, our next opponent will be from the area,” he said.
The winner of the Yavneh-Ascension game will play either Denton Calvary (20-8) or Dallas Covenant (12-11). Covenant and Yavneh each beat the other team on their home court. Martin said his team was a little too caught up with its offensive struggles in the first game and relied more on its defense in the second game.
“Anything can happen at any time. But we’re a good defensive team, so if we hang our hat on that, we’ll be in games,” he said.
Either way, this has been a tremendous success for Yavneh.
“It shows this is a good, hardworking community that can do this not only in the classroom, but put a great product on the court. The Yavneh boys are an outstanding program. David does an excellent job. For my girls, they want that, too. They want people to show up and cheer for them, and to be respected also. This game, for us, is such a good feeling and moment of accomplishment,” Martin said.
“It allows the girls to know that when they work hard, the community will back them, and there will be people showing up.”
For updates on Yavneh’s playoff run, visit tjpnews.com and the TJP Facebook page.