By Jori Epstein
Special to the TJP

They all cradled the same coffee cups, debated the same sports teams and music groups, the boys even donning the same kippot.
But as 179 Jewish teens from 29 countries outside the U.S. flocked to Yavneh Academy of Dallas Feb. 14, the day was anything but typical. A teen from Berlin led a traditional Shacharit service in one hall. Students packed a classroom in meditation upstairs. Still more circled in the library for a musical service that fittingly ended with a rendition of Matisyahu’s One Day lyrics.
All my life I’ve been waiting for
I’ve been praying for, for the people to say
That we don’t wanna fight no more
They’ll be no more wars
And our children will play
The international teens came from France and Uruguay, Switzerland and Moldova, Georgia (the country) and Latvia. All were in town for the 93rd annual BBYO International Convention, where thousands joined at the Hyatt Regency from Thursday through Monday. 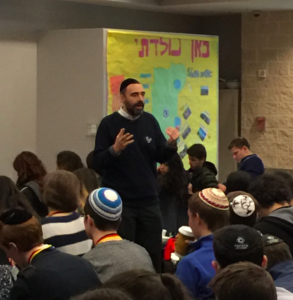 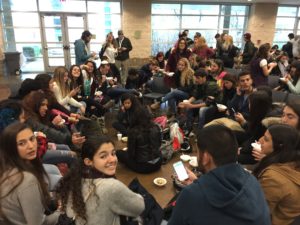 First, the international attendees joined Yavneh.
“This idea kind of morphed from a conversation this summer to follow up,” said Rabbi Meir Tannenbaum, Yavneh’s principal of Judaic studies who works for BBYO in the summers. “I realized it’d be great to bridge them.”
The day’s programming spanned activities nearly as diverse as its audience, from sports to TED talks, cooking to music.
One Yavneh classroom transformed from its usual home for Exodus analysis and Julius Caesar readings to a theater stage. Its actors hailed from Austria, Israel, Serbia, Bulgaria and Lithuania.
Yavneh’s math classroom shifted from filling whiteboards with calculus problems to penning slam poetry pieces to paper. Poems ranged from Spanish to English, Hebrew to French. In some cases, Google Translate bridged linguistic gaps. Other times, students encouraged peers to perform in their native languages.
“It’s in French,” one boy said, hesitant to share his reading.
“Perfect,” another student told him.
“Just express yourself,” a third chimed in.
He did, reading verses of how he feels “a little richer when I say I’m Jewish/I have a lot of things on my heart, do Yom Kippur with hunger.”
The experiences expressed were common among the otherwise diverse teens — a unity in diversity paradox that became the theme of the day.
Yusuf Gurkan, one of nine teens visiting from Turkey, said he wanted to come to Dallas for international convention (IC) after attending a BBYO summer camp. The trip so far hadn’t disappointed.
“In Turkey we don’t have so many Jews our age so it’s really good to see more people here,” said Gurkan, 16. “I’ve never seen this much Jews together in my life.”
Sixteen-year-old Erika Kleiman, in town from Buenos Aires, Argentina, agreed. She’d been to the U.S. before, visiting Disney World in Orlando with her family. But even the self-described happiest place on Earth didn’t compare to what this trip meant to her.
“IC is like a dream for everyone,” Kleiman said. “I really love it, like I can meet everyone and see the different cultures and communities.”
It’s those interchanges, Tannenbaum said, that the school aimed for when planning the exchange day.
“The mission at Yavneh is for our kids to feel Judaism come alive to them,” Tannenbaum said. “To feel it be more than just text study, more than just history. Having them experience this with 170 Jews who are strong enough to identify as Jews even in their countries that aren’t necessarily so hospitable to Jews…is such a great opportunity.”
As the teens mingled, sang along to Matisyahu lyrics and prayed together, they were part of something bigger.
“Listening to someone lead services from Berlin — yeah, he has a German accent but it’s the same words and the same tunes,” Tannenbaum said. “We’re the same even though we’re different and I think that’s the greater message today: You’re not alone. Wherever you are there are Jews and you really have much more in common than you have different.”
David Schapiro, who led that same morning service he usually leads at school in Berlin, agreed.
“This is what Judaism’s about,” Schapiro said. “You can go anywhere and you feel at home because the people are like you there.
“It’s so cool.”
In Polish and Turkish, Italian and Romanian, Spanish and Hebrew, the message was the same.

An Evening of Song rescheduled